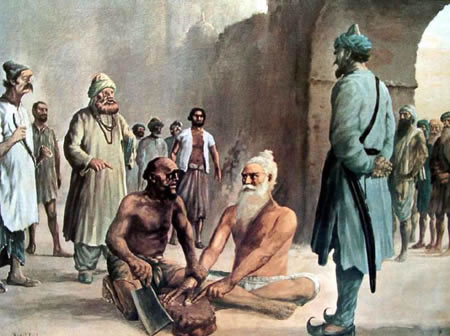 The entire life of Bhai Mani Singh Ji is a lighthouse for the Sikhs. Nine of his ten brothers, seven of his sons and many grandsons laid down their lives for the causes so dear to the Sikh Gurus. His martyrdom will keep inspiring Sikh generations for all time to come emulate his personal life and unflinching faith in Sikh ideals.

Bhai Mani Singh was born at a village named Kailbowal. The village was later destroyed during Nadar Shah's invasion. Its ruins are near Sunam, district Patiala. His father was a Sikh farmer, named Chaudri Kala. His parents called him Mania. When he was about five years of age, his parents visited Anadpur. They did so to see and pay homage to Guru Tegh Bahadur. Guru Gobind Singh, then known as Gobind Rai, was about the same age as Mania. They became playmates and friends. When Chaudri Kala and his wife decided to return home, Mania refused to accompany them. He expressed a wish to stay at Anandpur and play with Gobind Rai. His wish was granted. He became a lifelong companion and devoted Sikh of Guru Gobind Singh. Mata Gujri took charge of Mania. She treated him like her own son. The playmates lived together, dined together, played together and learnt together. Mania became a great scholar.

When Guru Gobind Singh introduced his new baptismal or Amrit ceremony, he baptized his playmate Mania, too. Thereupon, Mania became Mani Singh. the Guru held him in high esteem and consulted him on all matters. When Guru Gobind Singh evacuated Anandpur in 1704, Bhai Mani Singh was with him. Under the Guru's orders, he conducted Mata Sahib Kaur and Mata Sundri to Delhi. There he busied himself in serving them. In 1705-06 he accompanied them to Damdama Sahib. There under Guru Gobind Singh's direction, he wrote a copy of Guru Granth Sahib. Later he accompanied the Guru to the Deccan. When the Guru was about to depart from this world, he sent Bhai Mani Singh to Delhi alone with Mata Sahib Kaur. At Delhi, he busied himself in serving Mata Sahib Kaur and Mata Sundri. He also did much to preach and popularize the Sikh faith.

After the martyrdom of Baba Banda Singh Bahadur some Sikhs began to regard him (Banda Singh) as Guru. They were called Bandeis. But the strict followers of Guru Gobind Singh, or Tat Khalsa, believed that the system of personal Guruship had ended with the Tenth Guru. The Bandeis began to claim that they should have an equal share in the management of the Gurdwaras and other affairs of the Panth. But the Tat Khalsa refused to accept this claim. They did not favor such divisions in the Panth. Still, the Bandeis persisted in their claim. Much tension was created between the two parties.

Mata Sundri, who was residing at Delhi, became aware of these troubles. She sent Bhai Mani Singh to Amritsar, with Sri Kirpal Singh, the maternal uncle of Guru Gobind Singh. He was charged with the duty of bringing about peace and unity among Singh. He was appointed Granthi (or head priest) of the Darbar Sahib. He was asked to organize the service in the Gurdwara and to manage its affairs. He was further told by her, 'Don't send any money from the offerings to me. The whole income should be spent there. It should be spent in maintaining the service, langar, and other needs of the institution. Bhai Mani Singh and his companion arrived at Amritsar in the beginning of 1721. In the consultation with the notables of the city, they put the affairs of the Gurdwara in order.

A few days later it was the Vaisakhi fair. Elaborate arrangements were made for the grand celebrations. Thousands of Sikhs gathered around the tank. The Tat Khalsa and the Bandeis also gathered in large numbers. They were preparing to come to blows. But Bhai Mani Singh came between them and saved the situation. He suggested that instead of fighting, they should decide their claim by casting lots. He took two slips of paper. On one he wrote, 'Waheguru Ji Ki Fateh'. These words were used by the Tat Khalsa when meeting and saluting each other. On the other slip he wrote, 'Fateh Darshan'. These words were used by the Bandeis for the same purpose. Both slips were immersed in the water at Har Ki Pauri. The agreement was that the party whose slip rose first to the surface, would be considered to have carried the day. For some time neither slip came up to the surface. It seemed as if both the slips had sunk forever. The parties stood in great suspense. At long last, the slip with Waheguru Ji Ki Fateh came to the surface. The Tat Khalsa was declared to have won. The Bandeis took it as the Guru's verdict. They agreed to give up their claim.

In this way, on account of Bhai Mani Singh's wisdom and sweetness, the dispute was settled in a peaceful manner.

Bhai Mani Singh was the most learned and respected man of his time. As Granthi of Darbar Sahib, he did very valuable work for the Panth. His masterly exposition of Gurbani was appreciated by all. It drew an immense congregation every day. His saintly life and affectionate manners won everybody's esteem and admiration. He wrote a number of scholarly books, like the Gyan Ratnavali. He also compiled the Dasam Granth. For years the Muslim rulers had carried on a large scale massacre of the Sikhs. All efforts was made to prevent the Sikhs from assembling in their favorite shrine, the Darbar Sahib, Amritsar. Therefore, for years the Diwali festival had not been held there. In the year 1738, Bhai Mani Singh applied to the governor of Lahore for permission to hold the Diwali festival in the Gurdwara. Permission was given on condition that Bhai Mani Singh should pay to the government 5000 rupees after the affair. The fair was to last for ten days. Bhai Mani Singh hoped that he would be able to pay the sum out of offerings to be made by the Sikh visitors. He issued invitation to the Sikhs of all places. In response to that invitation, thousands of them started from their homes.

But the governor's intentions were not good or friendly. He sent a large force to Amritsar under the command of Diwan Lakhpat Rai. This man was a bitter and sworn enemy of the Khalsa. The governor said that the force was intended to keep order. But the real purpose was to prevent the Sikhs from gathering in large numbers. The force was stay at Ram Tirath, near Amritsar. It was to march towards the city on the day of the fair. Seeing it advancing towards the city, the Sikhs would be frightened, and would disperse of their own accord. Bhai Mani Singh knew that Mughals don't like Sikhs so they are here to kill the Sikhs because a large number of Khalsa was going to gather. So Bhai Mani Singh issued an order to all Sikhs to not to come to the festival. Bhai Mani Singh refused to make the payment because he said no fair was held. He was arrested for his failure to make the payment. He was taken to Lahore in chains. There he was condemned to death by tortures. He was told that he could save his life by embracing Islam. He stoutly and resolutely refused to give up his religion. Orders were given that his body should be cut to pieces, limb by limb. As the executioner started his work, Bhai Mani Singh sat calm and serene. He was absorbed in meditating on God and repeating the Guru's word.

Bhai Mani Singh was martyred about one month after the day on which Diwali festival was to have held in 1738. His Sahid Ganj is outside the Masti Gat of Lahore, and near the Lahore fort.