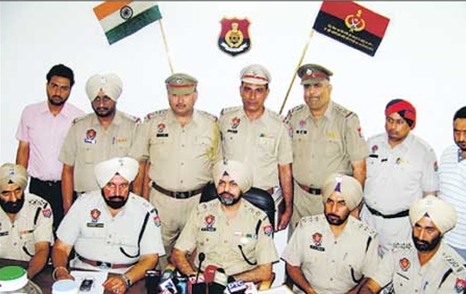 Ludhiana, Punjab – The Punjab Police, in another well orchestrated press conference with a media splash, announced over the weekend the “arrest” of four Sikhs. The Police claimed that the detained individuals were activists of Babbar Khalsa International (BKI) and asserted that various illegal arms and explosives were found in their possession.

Senior Superintendent of Police of Ludhiana, SS Mann, claimed that the four “Singhs” are key members of BKI, and have been involved in many “terrorist” activities in Punjab and other surrounding areas for some time.

The Mann claimed that the high intensity RDX explosive and a Russian Kalashnikov (AK-47) rifle were among the weapons seized from the men.

The individuals, Harminder Singh, Jaswinder Singh, Gurjant Singh and Manjinder Singh were arrested early on the Sunday, on July 18th by the Ludhiana and Khanna Police.

According to reports, Harminder Singh carried a reward of 500,000 rupees and is being blamed as the mastermind in the 2007 Ludhiana cinema blast case.

Interestingly, Police also admitted, that Jaswinder Singh, Gurjant Singh and Manjinder Singh are also members of the “Shiromani Tat Khalsa” group originating from Ludhiana but made no further implications of this link.

They above three were injured during a December 2009th protest, when the Punjab Police indiscriminately began firing on Sikhs for protesting the visit of blasphemous Divya Jyoti Jagriti Sansthan cult leaders Ashutosh to Ludhiana. Vidoes and new reports of the Police attack in Ludhiana was widely publicized in the Sikh media and over the Intrnet. The Punjab Police uncessfully tried to supress publishing of the live footage of the shooting and beating of Sikhs in which one Singh, Darshan Singh was killed by a police bullet and dozens of others were injured.

Video and article of 2009 Ludhiana Police Attack on Sikh Protestors:


In the past, other high drama “arrests” similar to this one have turned out to nothing more than a Punjab Police publicity stunts, in which innocent youth are used as bogeymen to stir up anti-Sikh sentiments under the guise of “anti-nationalist” activities.