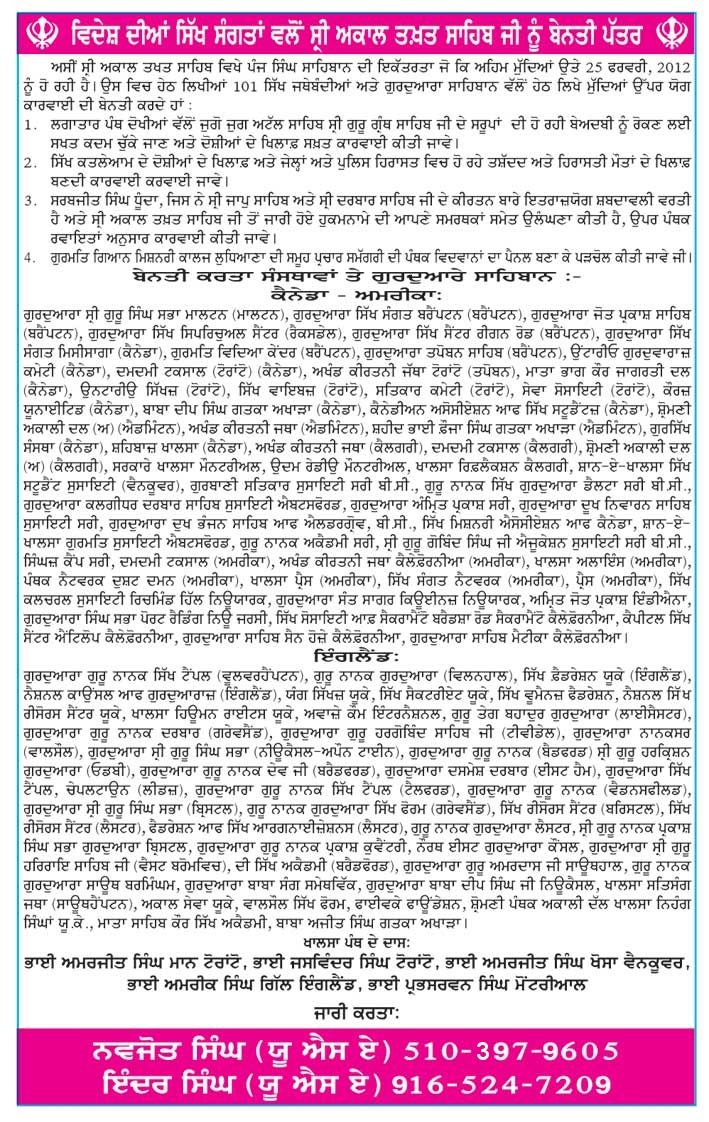 The over hundred organizations, representing a large section of the Sikh diaspora in North America and Europe, requested Sri Akal Takht Sahib to take strict action against the following anti-Sikh elements who are causing damage to to the Panth:

1) The culprits responsible for the ongoing beadbi (desecration) to the Holy Saroops of Sri Guru Granth Sahib Ji and Gurbani Pothees in various cases.

2) The perpetrators and miscreants connected to the genocide of Sikh, and those who are continuing the policies of persecution and murder of Sikhs in prisons and jails across India.

3) The purported “professor” Sarabjit Dhunda, who has insulted the Divine Bani of Sri Jaap Sahib and the Gurbani Kirtan recited at Sri Darbar Sahib, Harmandar Sahib, along with his pro-Kala Afghani and missionary associates who defied the edicts issued from Sri Akal Takht Sahib Ji.

The request from the Sikh organizations is the direct reaction of outrage felt across the global Sikh community in response to the the tragic news of eight Holy Saroops that were recently desecrated in Haryana and Gujrat, and the death of the tortured inmate, Bhai Kulwant Singh who recently died due to a suspicious fire that was set in his jail.

The request to Sri Akal Takht Sahib for strict action against the heretic preacher Sarbjit Dhunda and the Gurmat Gian Missionary outfit is the consequence of the infuriating and spiteful propaganda against Gurmat principles and traditions being spread by such heretics under the guise of being "Sikh missionaries".

Sarbjit Dhunda, one such purported missionary, has been asked by Sri Akal Takht to clarify his statement on video in which he stated that certain compositions were being recited by our Kirtanis at Sri Darbar Sahib would bring prostitutes and harlots to shame. 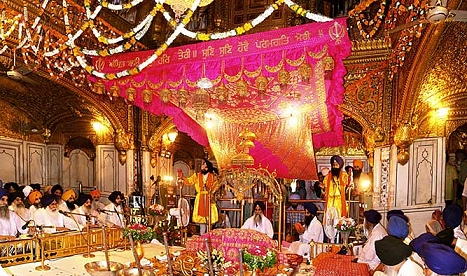 Dhunda Flip Flops : Video Manipulated or Kahana Dhesian or some place else ?

When Sarbjit Dunda was asked to clarify his remarks on Sri Darbar Sahib, he calculatingly stated that he was not referring to Sri Darbar Sahib (Sri Harmandar Sahib) itself, but to a program held at Kahna-Dhesian where a recorded religious song by Hans Raj Hans was played in the presence of Sri Darbar Sahib. He could not explain any further how these remarks were related to this incident.

During an interview on the Candadian Talk Show Rangla Punjab (CJMR1320), the presenter questioned how could Dhunda be referring to Kahna-Dhesian when no vulgar compositions were ever sung there? Realizing his folly, Dhunda immediately began to deviate from the conversation and attempted to shift the story from Kahna-Dhesian to another arbitrary place but failed to provide any evidence, but instead vaguely stated he had talked to an acquaintance about something similar happening at “another place.” Again, no further information was provided.

Running out of excuses, Dhunda has also stated that his video had been “manipulated” by his detractors and they have taken his remarks completely out of context. Again, he provides no further evidence supporting his remarks. Interestingly, the entire online video his he stated is manipulated is an exact extract of the same video Sarbjit Dhunda has posted on his own YouTube channel. 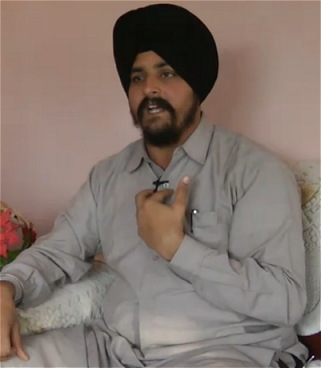 Dhunda has yet to explain his remarks regarding Sri Darbar Sahib

Sarbjit Dhunda, who touts himself as a “professor” and a scholar of Sikhism, has no formal post-secondary education or training. He is often referred by his overzealous cohorts as a “ਨਿਧੜਕ ਪ੍ਰਚਾਰਕ” (a fearless preacher), yet he cannot even make up his mind to provide any consistent justification for his remarks. Meanwhile, those who are lobbying on his behalf have no qualms about exactly what he said and meant in regards to the Kirtan recited at Sri Dabar Sahib.

(1) exact name of the Ragi,
(2) content of the verses sang, and
(3) date of this incident that that has brought even prostitutes to shame."

"If he can not do neither - he is not worthy of being called a man or a Sikh."

Associates Agree with Sri Dabar Sahib Statement, Call Gurbani “ਕੰਜਰ ਕਵਿਤਾ”
Holding true to their character, Sarbjit Dhunda’s supporters see nothing wrong with Dhunda's criticism of the Kirtan at Sri Dabar Sahib. On various heretic websites, including Rozana Spokesman, and the amateurish Khalsanews, his supporters are openly referring to Sri Guru Gobind Singh Ji’s Bani as “ਕੰਜਰ ਕਵਿਤਾ” and state that Dhunda is only pointing out the truth that the Bani being recited at Sri Darbar Sahib is indeed “ਕੰਜਰ ਕਵਿਤਾ” and hence stand by Dhunda’s remarks even though Dhunda seems to be backtracking from them.

While Sarbjit Dhunda, the “ਨਿਧੜਕ” fearless preacher, is now back peddling from his own remarks, his cronies, even though in disarray, are not ready to do follow suit. They stand by Dhunda's venomous remarks about Sri Darbar Sahib, even if he is not willing to himself.

Perhaps that is why many of them have publicly threatened that they will abandon Dhunda and his Gurmat Gian Missionary outfit if he appears at Sri Akal Takht Sahib in front of the five Jathedars on the 25th of February.

Regardless of what happens within heretical camps, the message from over one hundred Panthic organizations and institutions is loud and clear – the Sikh Panth will not tolerate the abuse and disrespect of Gurbani and Guru Granth Sahib Ji – it is pertinent those who are performing their duty at Sri Akal Takht Sahib abide by the wishes of the Khalsa Panth at-large, in accordance to Panthic norms and traditions.