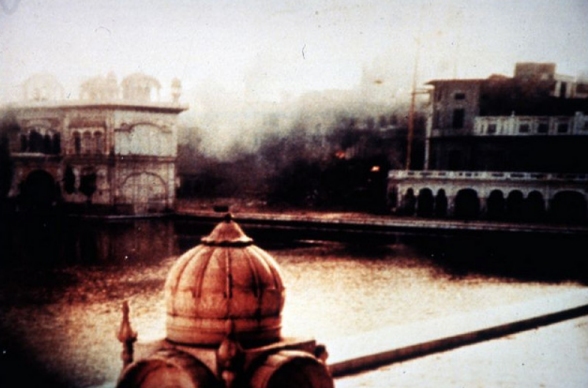 Thousands of Sikh men, women, and children were killed during the June 1984 attack

UK Foreign Secretary William Hague revealed on Tuesday that Britain was consulted in the planning of the attack on Sri Darbar Sahib but its advice had limited impact and the British advice on how to avoid loss of life was ignored.

According to the report, the British military adviser sent to India had emphasized the need to minimize loss of life and use force as a last resort. In a document released by the UK government on Tuesday, the British adviser had noted that “the Indians had not given much thought to how they should root out the extremists, beyond applying the ‘sledgehammer to crack a nut’ principle.”

The revelations in the British report are in stark contradiction to the Indian government’s claim that the 1984 assault was executed as an emergency response and not a pre-planned operation. The Sikh community has long asserted that the Indian government deliberately chose to storm the Sri Darbar Sahib complex on the martyrdom anniversary of Guru Arjan Dev, when officials knew that thousands of innocent pilgrims would be in attendance. Independent reports have confirmed that thousands of civilians were killed in the bloody onslaught at the Sri Darbar Sahib complex and 38 other historical Sikh Gurdwaras in Punjab and neighboring states.

Independent reports have confirmed that thousands of civilians were killed in the bloody onslaught at the Sri Darbar Sahib complex and 38 other historical Sikh Gurdwaras in Punjab and neighboring states.

WSO Senior Vice President Kulmit Singh Sangha said, “The UK investigation has revealed the extent of the planning behind the 1984 attack on Sri Darbar Sahib but there are still too many unanswered questions. While we believe that the UK Government should still conduct a full parliamentary inquiry, it has already done far more than the Indian government which has refused to be truthful about its motivations, its choice of tactics and the total number of casualties. In the interest of justice, it is incumbent on the Government of India that it immediately conduct a transparent and thorough inquiry into the attack on Sri Darbar Sahib.”

An independent inquiry into the attack on Sri Darbar Sahib has never been undertaken by the Indian government, however information about the assault continues to slowly surface three decades later. Recent startling revelations by retired Indian army officer Brig. Onkar S. Goraya in his book “Operation Blue Star and After- an Eyewitness Account” include the admissions that Indian army officers were involved in “cases of cold blooded killings of detainees, some with hands tied at the back” and that members of some army units were involved in looting and robbery.

WSO President Dr. Amritpal Singh Shergill said, “It is clear that justice continues to elude the Sikh community 30 years after the attack on Sri Darbar Sahib. None of the Indian officers guilty of atrocities and murders have ever been brought to justice. The UK documents make it clear that three decades after the attack, the full truth has yet to be revealed and the Government of India has shown no desire to heal the wounds of the Sikh community.”

The World Sikh Organization of Canada (WSO) is a non-profit organization with a mandate to promote and protect the interests of Canadian Sikhs as well as to promote and advocate for the protection of human rights for all individuals, irrespective of race, religion, gender, ethnicity, and social and economic status.