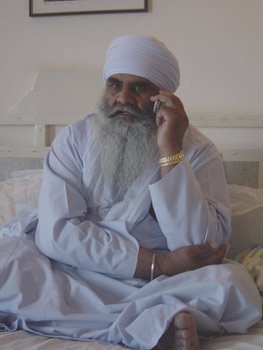 Sadh Mann Pehowa : Feeling the Pressure from all Sides

BIRMINGHAM, UK (KP) – After being barred from participating in the tercentenary celebrations in Punjab, and shunned by the Gurdwaras in United Kingdom, the controversial sadh Maan Pehowa has canceled his entire UK trip and instead decided to hideout in his dera in Pehowa.

The Baba was planning to arrive at Heathrow Airport in London on Friday morning, to hold programs from September 1st to the 10th in various locations across the UK. Much to the embarrassment of his followers he never even left his home dera in Punjab.

No stranger to controversy, the Baba is blamed for rape, sexual assault, land grabbing, and impersonating Guru Gobind Singh Ji. Col. GS Sandhu of the Ex-Majha Servicemen Front has presented evidence at several press conferences of the Baba’s misdeeds, yet no official response has been made by the Baba's dera on the outstanding charges.

Col. GS Sandhu, who successfully exposed Police Cat Nang-Poohla, and is now heading the campaign to expose the Pehowa Baba, had last week requested “… all sources to organize protests in UK (against the Baba).” Panthic organizations, like the Khalsa Alliance also made similar requests to the UK Sangat.

Upon learning of his potential visit, Sikh organizations along with the support of the Sikh youth across Britain began to organize plans to protest and halt his visit. Several meetings were held between Panthic sevadars and the various Gurdwara committees who were to host the Baba; the sevadars successfully persuaded the Gurdwaras to cancel his programs once they learnt of the seriousness of the charges leveled against him. The Baba’s followers, including his hosts, Gurmeet Chahal, Onkar Johal and Sandeep Gill had made desperate attempts to sway the Gurdwaras managements to allow their Baba to perform, but their pleas went unheard.

Worried about further embarrassment from protestors at airports and other venues, the organizers quickly cancelled his entire trip, and in an attempt to save face stated his trip has been “rescheduled” for November of 2006.

Lashwinder Singh mentioned that “…when the Sikh youth in Punjab were being slaughtered (in the last two decades), these Babas did not even receive a scratch. While those Shaheeds had taken Amrit and were tortured brutally in the Police stations and sacrificed so much for the Panth, what have these (Babas) taken Amrit for? Was it for enjoying the luxuries of life and building lavish deras ?”

Baba Hides out in Dera

Facing pressure from all sides in UK and in Punjab from the Majha Ex-Serviceman Front, Sadh Mann Pehowa, who is used to having hundreds of followers around him, decided it was too risky to make the trip abroad. Instead of heading to New Delhi International Airport, he decided to stay put in his dera. This is yet another embarrassing low point for this Baba, whose followers consider him an incarnate of Guru Gobind Singh. In his defunct trip to California, the Baba was hounded by protestors wherever he went, and shunned from all Gurdwaras. Perhaps the Baba feels safe hiding out in his luxurious dera, but for how long ?

Sender IP identification :3.238.130.97
By clicking on the 'Submit' button, you agree to the following conditions: