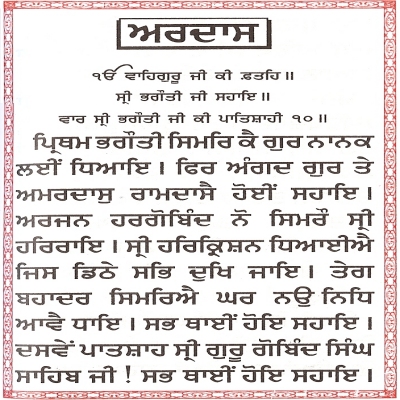 Initial verses of the Sikh Ardas : From Chandi-di-Vaar

FINLAND (KP)--A Finland Gurdwara Committee’s peculiar decision to change the Sikh Ardas has been condemned by Sikh organizations based around the world. The Sikh leadership based in Punjab and other States is being perceived to take a strong stand against such blasphemy.

The Sikh Community is bound to follow the mandates of Akal Takhat Sahib at all times but the decision by Finland’s Capital City Gurdwara is certainly an attack on Sikh principles and beliefs as no consultation was done with the Sikh Nation before such a major decision was taken by the committee. The Sikh Ardas is derived from Gurbani and changing the ardas means changing the words of Guru Sahib, which in the Sikh religion is completely unacceptable.

What the Finland Committee has done is not very different from the works of Gurbaksh Kala Afghana who was excommunicated from the Sikh Nation. Kala Afghana published a series of books challenging Sikh traditions and the basic belief system without consulting with Akal Takht Sahib and other Sikh authorities.

He alleged that mischievous persons were wrongfully raising questions on the Dasam Granth Sahib without studying its contents. Baba Seva Singh raised these views during his katha held in Stockton, the historical city of the Gadri Babas.

Several other Panthic organizations, including the Akhand Kirtani Jatha and Damdami Taksal also condemned changing of ardas and Gurbani. Representatives of both organizations were also present at the large scale program held by Baba Seva Singh. Both organizations expressed grief over the individualistic approach taken by the Finland Committee.