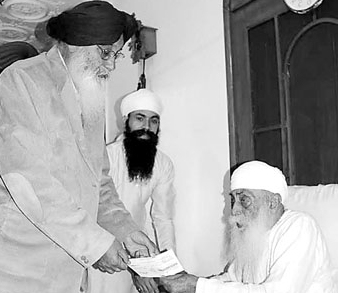 Payback : Parkash Badal hands a check of Rs. 50 lakhs to his Naamdhari guru

Ludhiana, Punjab (KP) – Following the SAD(B)/BJP’s opprobrious election campaign, Nakali Akali Parkash Badal has been active in returning political favors to various anti-Panthic dehdhari ‘gurus’ and cult leaders who supported him during the elections. In Sikh circles, the most contentious of these unscrupulous political favors is Badal’s recent pledge to revive and strengthen the infamous anti-Sikh ‘Namdhari’ cult throughout Punjab.

At a meeting held on March 24, just weeks after the election results were announced, Badal visited Jagjit Sinh, leader of the ‘Namdhari’ cult, and presented him with Rs 50 lakhs. Badal stated that the money was being donated for the completion of a Kuka memorial at Malerkotla and promised that this was just the beginning of his program to ‘revive and create awareness of the Namdharis’ in Punjab. Several other members of SAD(B) and the ‘Namdhari’ cult were present at the meeting including Thakur Udhey and the Deputy Commissioner of Ludhiana, Sumer Gurjar.

Badal scandalously declared that the Punjab State Government would also be providing funds to reestablish the ‘Namdhari’ headquarters at Bhaini and that Jagjit Sinh will have unlimited access to these funds. Plans were also drafted to construct roads linking the Bhaini headquarters to major cities in Punjab to provide easy and fast access to the dera.

To further promote anti-Sikh dehdhari ‘gurus’ Badal requested the Vice Chancellor of Guru Nanak Dev University (Amritsar) to immediately reopen the ‘Satguru’ Ram Singh Chair and promised that his government would cover any and all costs to revive this program, which had been previously been discontinued after Sikh organizations protested against its inherent sacrilegious idiosyncrasy of promoting a living human ‘guru.’ In addition to all this, the Badal government also plans to fund and build more ‘Namdhari’ centers in Raikot and Amritsar in the next several months.

Panthic organizations throughout the Diaspora, including the Khalsa Alliance and Shabaaz Khalsa stand united and resolute against the anti-Sikh ‘Namdhari’ cult and noted that the current agenda of the Badal regime of promoting dehdhari ‘gurus’ is a mirror reflection of the ‘Nirankari’ episode of 1978.

Sikh leaders cautioned that there needs to be internal transparency into how the donations from the Sangat are handled as Badal has a notorious reputation for laundering money from donations made by the Sangat via the SGPC, as he did during the tercentenary Vaisakhi celebrations in 1999; money which he then uses to propagate his anti-Sikh agenda.

Mahant Badal first invited dehdhari ‘guru’ Jagjit Sinh to participate in the 1999 tercentenary celebrations after having Panthic Jathedar, Bhai Ranjit Singh Ji removed and replaced by Badal’s peon, Vedanti; who continues to remain silent on this serious issue. Prior to that Jagjit Sinh and his predecessors had always been banned by the Sikh nation from participating in any Panthic programs as the ‘Namdhari’ cult has been excommunicated from the Khalsa Panth.

This ‘revival of the Namdharis’ by the Badal regime is unprecedented and is a pure indication that Badal and his BJP/RSS masters are determined to desecrate the sovereignty of sacred Sikh values and institutions.