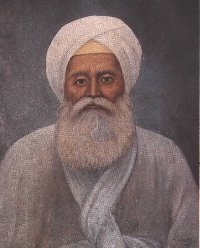 Giani Gian Singh (1822-1921), poet and historian, was born on April 15th, 1822, at Laungoval, a village in present-day Sangrur district of the Punjab. Gian Singh claimed descent from the brother of Bhai Mani Singh Shahid, Nagahla Singh. His father's name was Bhag Singh and mother's Desan. He learnt Gurmukhi in his village from Bhai Bhola Singh and Sanskrit from Pandit Atma Ram. He was gifted with a melodious voice and recitation of Gurbani earned him popularity in the village. At the age of twelve, he was taken to Lahore by his maternal uncle, Karam Singh, who was a Subahdar in the army of Maharaja Ranjit Singh.

Dhanna Singh Malvai introduced him to the Maharaja who employed him to recite the Sukhmani to him every morning. At Lahore Gian Singh was able to continue his studies under the guidance of Giani Ram Singh. After the death of his patron, he returned to his village and received appointment in the revenue office in Patiala state in place of his uncle, Hari Singh, who had died childless in 1841 fighting in Maharaja Karam Singh's army. During the first Anglo-Sikh war, when Patiala was an ally of the British, Gian Singh was sent to Mudki where he was assigned to distributing mail. In 1849, as Patiala troops were engaged in an anti-rebel operations in aid of Jind state, Giani Gian Singh who was among them was seriously wounded in the leg and had to quit service.

His true calling in life began when he resigned his position as a granted in Patiala and set out on an extensive peregrination across India visiting places of pilgrimage, especially those commemorating events in Sikh history. Returning to the Punjab owing to the upheaval of 1857, he came in touch with Pandit Tara Singh Narotam, a renowned scholar of the Nirmala school, whom he acknowledges in his writings as his literary mentor. He helped Tara Singh in preparing his lexicon of the Guru Granth Sahib, Guru Granth Girarath Kos, by sending to him in Patiala notes he took of the religious discourses of Giani Chanda Singh Surama, the blind, another celebrated scholar of the day, whose seat was in Amritsar. Giam Gian Singh was launched on his own distinguished career as a writer with the publication in 1880 of his Panth Prakash, a history of the Sikhs in Braj verse.

He now planned another ambitious work, the Twarikh Guru Khalsa, which was to be published in five parts. The first three parts were lithographed in 1892 by Baba Rajinder Singh, proprietor Guru Gobind Siligh Press, Sialkot. Urdu editions of these three volumes entitled Twarikh Guru Khalsa, Shamsher Khalsa and Raj Khalsa, respectively, were also published. Suffering a prolonged illness in Amritsar, Giani Gian Singh transferred his unpublished manuscripts as well as his rights in published books to the Khalsa Tract Society for a subsistence allowance of Rs 12 per month. He survived his illness, and returned to Patiala where he received ready patronage of the ruling family. He solemnized the first wedding of the young Maharaja Bhupinder Singh on 9 March 1908.

Giani Gian Singh remained celibate. He adopted Giani Hamir Singh, the son of his niece, Pradhan Kaur, as his heir. In 1916 he drew up a new will in which he nominated a committee to arrange the publication of his works. The members of the committee were Bhai Sahib Bhai Arjan Singh of Bagarian, Sardar Bahadar General Gurnam Singh, Bhai Kahn Singh and Sardar Gajjan Singh of Ludhiana. On 15 August 1916, the Maharaja of Patiala approved the constitution of a History Society, with Hamir Singh as its secretary, for the publication of historical works by Giani Gian Singh and others.

He also sanctioned a grant of Rs 135,000 for the Society and authorized the publication through the state press. But a dispute which arose between the states of Patiala and Nabha hampered the work of the committee. Gian Singh hilnself became a pawn in this feud. He was a native of Patiala state and had stayed for long periods at Patiala, but the ruler of Nabha, Maharaja Ripudaman Singh, considered him a relation, the Maharaja's mother being a daughter of his village, Laungoval. Both the states thus claimed him. one night he was whisked away in a car from Patiala to Nabha. He died there on September 24th, 1921.