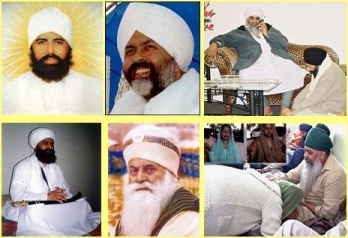 Today, as we look around us, we see as many Sadhs and Sants as there are car models. Everywhere you look there is “Sant Baba…. 108,” “Mahapursh Brahmgyani….,” “Karneewalé Baba Ji…” May God help us all! When a Pakhandi (fake) Sadh, Sant or Baba is exposed for his crimes of rape, abuse, theft, drug-trafficking, distorting Gurbani or misleading thousands of ignorant and vulnerable men and women to stray away from the Guru Granth & Guru Panth, these "Saadhs" and "Sants" accuse those who discover their nefarious deeds of “slandering the Saints.” Off their tongues roll the Gurbani lines of:

But who made these people “Sants”? Who is to say that they are Saints? Immediately, upon being found out by the sangat of degrading conduct, these so-called "sants" spout this Gurbani line on cue to give them cover from people witnessing the truth of their misdeeds. Due to our own ignorance of the true meaning of Gurbani, we are not able to distinguish who is a true “Sant” and a true “Maha-purakh” (True or Great Being). As a result of our self-inflicted ignorance and lack of connection with the True Guru, we take every man dressed in a white chola (dress) and white dastar (turban) on face value and accept him as a “Sant” without ever trying to find out if he is worthy of the label. May God help us all! If we read Gurbani, He speaks to us directly and the Guru says:

“The True Guru is the Lord's “Sant” (Saint), the Guru is the Mahapurakh (True Being), who speaks the Bani (Divine Word) of the Lord, Har, Har. Whoever reads this Bani, and listens to it, is liberated from sin. I am forever a sacrifice to that Guru. ||1||”
(Dhanaasree, Ang 667, SGGS)

Whenever a “Baba” or “Sant” is caught in a sticky situation, he will typically chose to remain quiet and have his followers make press statements representing the Baba by saying “Our Baba is not like that… anyone who slanders him will go to hell… Baba Ji is innocent.” If the Pakhandi “Baba” or “Sant” is so truly innocent or at least repentent, then why is it that every time someone witnesses with their eyes the truth about crimes and misdeeds he has committed does he remain quiet and have his followers defend him rather then coming clean.

If Tony Blair goes to war against Iraq or does something which the public find objectionable, then Mr. Blair goes in front of the public and to honestly clarify his position. Tony Blair or any leader in any democratic state is accountable to the public. They have to justify their position and apologise to the public. However, it seems the so-called “Saadhs,” “Sants,” and “Babé”, postitioning themselves as repositors of Gurmat and supposed stalwarts of moral authority, are not accountable to anyone, whether it be to individuals of the Sadh Sangat or to the body corporate, Guru Khalsa Panth. May God help us all!

When a "Baba" is accused of committing sexual misconduct with a woman from his Dera (camp/dwelling), and instead of him truthfully clarifying to the sangat whether the statement is true or false, instead of him defending himself if it is not or on moral grounds apologising if it is, instead of holding himself accountable to the Sadh Sangat, the following familliar scenario again takes place; Baba keeps quiet and his followers bark at those who say that “Baba” should be arrested and tried in court. Why are these Pakhandi Babé or Sants very rarely arrested in India? Is it perhaps because the police, government officials, and politicians are their followers, support them in some way, or that they get their helping of blessings from the “Baba.” Their enablers hand them what is comparable to a “get out of jail free” card one gets in the game of Monopoly. May God help us all!

What does Guru Ji tell us?

“O pakhandi (hypocrite), renounce and abandon your hypocrisy; do not practice deception.

How many “Sants” exemplified the Saint-Soldier character of the Khalsa and fought for justice, fear putting themselves on the line or at times being arrested and being martyred upholding their principles and defending the innocent and downtrodden?

There are only a handful of these great people who are not saints by the mere clothes they wear, but by their actions. I remember listening to Katha (discourse) delivered by a great Gursikh of the name Giani Baba Kartar Singh Ji from Jatha Bhindra(n). Baba Ji recognised that when Bhai Makhan Shah Ji went to discover where the True Guru (i.e. Guru Tegh Bahadar Ji) resided in the village of Bakala, 22 people claimed to be the Guru. Nowadays there are not 22 people claiming to be “Sants” and self-proclaimed Satgurus, but instead they are in the thousands. Giani Baba Kartar Singh Ji Bhindranwale said that the litmus test to identity a true Sant (saint) is that he or she will never call themselves a “Sant” and will always remain in humility. Furthermore, he said the litmus test of Gurmat is Gurbani. If someone joins people to himself and not to the Guru and Naam, then he is a fake.

It is no surprise that during the Dharam Yudh Morcha initiated by Giani Baba Kartar Singh Ji Bhindranwale and led by Shaheed Giani Baba Jarnail Singh Ji Bhindranwale, all the fake Sants and Babé climbed back into their holes and kept a low a profile. Since the mid 1990s, the pakhandi Sant trade flourished to such an extent that they even made a trade union called “Sant Samaj”. Not only do rikshaw drivers and train-workers have a trade-union, but nowadays our white-clothed friends who are driven by Maya and power, have a trade-union which rushes to support them in case, for example, someone rightly accuses one of their members of rape, abuse, sexual misconduct, theft or drug-smuggling. May God help us all!

Once Guru Hargobind Sahib Ji was out in the fields with his Sikhs. One Sikh noticed a huge snake coming Guru Sahib’s way. He moved to kill him but Guru Sahib stopped him from doing so. When the snake came near Guru Sahib, Guru Sahib touched the snake with his lotus foot. With the divine and sacred touch of Guru Sahib’s lotus foot, the snake instantly died and his skin opened up. The Sangat was surprised to see that the snake had a lot of worms around and inside of it.

The Sikhs asked Guru Sahib what this was all about. Guru Sahib told the Sangat that the snake was a pakhandi (fake) Guru in his previous life. He had a large following and had promised salvation to all of them. Since he was a fake and profited from vulnerable people’s money and offerings, he got the life of a snake in the next life, and all his followers became the insects that were eating up the snake. Guru Sahib said the soul of the fake Guru regretted his past life and thanked Guru Sahib for freeing him from this terrible hell.

“The one who bows in humble reverence to the Primal Lord, the Lord of all beings – I am a sacrifice, a sacrifice to such a Guru. He Himself is liberated, and He carries me across as well. ||1||Pause||”
(KanRa, Ang 1301, SGGS)

The True Guru practically demonstrated to the Sikhs that the ones who follow these so called “Sants”, “Babé” and self-proclaimed “Satgurus” will become the insects who will feed off their so called Sants. Gurbani says:

“Those chelé, those devotees, whose spiritual teacher is blind, shall not find their place of rest. Without the True Guru, the Name is not obtained. Without Naam, the Name, what is the use of it all? People come and go, regretting and repenting, like crows in a deserted house. ||3||”
(Siri Raag, Ang 57, SGGS)

Let us all make a resolution that we will never consider anyone other than Siri Guru Granth Sahib to be our savior. We should give utmost respect to the Gursikhs of true conduct and listen to their consul, but we should have expectations of salvation only from Guru Sahib. A true Gursikh will never pose as a “Maha-purakh”, “Sant” or “Brahmgyani”.

The Editors can be reached