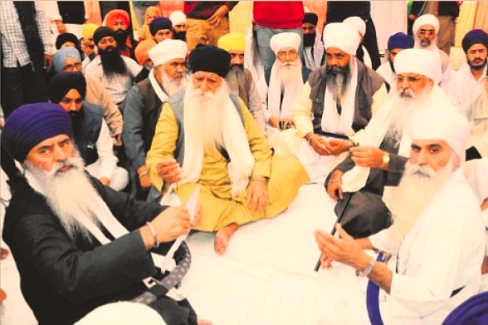 AMRITSAR SAHIB, PUNJAB - As the freedom campaign for Sikh political prisoners intensified across the globe with Panthic organizations standing together in unity in support of Bhai Gurbaksh Singh's indefinite hunger strike, the self-styled "Gurmat Sidhant Parchark Sant Samaj", a union of dubious sampardai deras, and Nihang dals, in a bid to possibly torpedo this synergy, have begun raking up unnecessary controversies such as the Nanakshahi Calendar and the Sikh Rehit Maryda during this critical juncture.

Interestingly, most of these self-proclaimed “sadhs” and Nihangs of this Sant-Samaj (“society of saints”) have a particularly close working relationship with ruling Badal (Akali) Dal party who have the blood of the Shaheeds on their hands since 1978, and have openly campaigned and supported the Dal in recent elections, and have been virtually unconcerned about the hunger strike initiated by Bhai Gurbaksh Singh Khalsa since November 14th. The babas see their political alliance with the Badals as a golden opportunity to make further inroads into Sikh religious institutions they do not directly control, but have always been under their radar.

While Panthic organizations and institutions across the globe have been focused on the efforts of Bhai Gurbaksh Singh and the plight of Sikh political prisoners, the zealots of Sant-Samaj, contrary to the sentiments of the rest of the Panth, have oddly launched a campaign for the elimination of the NanakShahi Calendar altogether and demanded the implementation of the lunar based Bikarmi/Vikarmi calendar. Latter calendar derives its name from the ancient Hindu King Vikramdatya, and has been traditionally used in north India and Nepal for several centuries.

The union of sadhs have also requested the Jathedar of Sri Akal Takht to take steps to clarify the “ambiguity” of certain Nitnem Banees in the Sikh Rehat Maryada.

It needs to be noted that the Sikh Rehit Maryada is an exhaustive and collective effort of eminent Sikh scholars and institutions who spent nearly half a century researching and compiling evidence of various Sikh traditions and norms of the Khalsa Panth. Furthermore, the eminent personalities who played a critical role in formulating the original “ਖਰੜਾ” or draft of the Sikh Rehit Maryada were highly respected within the Sikh Panth and led spiritually pious lives in accordance to the Sikh commandments of “ਕ੍ਰਿਤ ਕਰੋ, ਨਾਮ, ਜਪੋ, ਵੰਡ ਛਕੋ”.

It would not be wrong to state that the jeevan and character of those that comprise the Sant-Samaj is nil when compared to those purely religious personalities of the early 20th century who were part of the Gurdwara Reform Movement, and the played a key role in formulating a standard Maryada for the Panth. None of them have the spiritual depth or religious integrity of the GurSikhs from the past.

Until individuals of such spiritual caliber and veracity come forth under the sovereignty of the Khalsa Panth, no self-styled sant-politician or puppet Jathedar should have the authority to revise or tamper with the Sikh Rehit Maryada. Only those who are politically and spiritually sovereign in accordance to Khalsa norms should have the capability of amending or ratifying this document.

Similarly like the celibate priests of the Catholic Church, many “babas” have been hounded by allegations and charges of sexual abuse, improprieties, and even rape by their younger apprentices and other members of their congregation, but no action is ever been taken by the Sant-Samaj when such serious transgressions of Rehit occur.

Strangely, this organization seems infatuated with hijacking the Sikh code of conduct but not following it or enforcing it on themselves. There are countless cases every year brought out in the press where babas are caught red-handed committing immoral acts, but rarely is any action taken against them.

Ironically these baba and their modern Nihang counterparts publicly claim to be the biggest supporters of Sri Dasam Granth Sahib, yet the morals and ethics enshrined in Guru Gobind Singh Ji’s Banee are rarely followed in practice by their leadership and followers. Hence their characterless exploits have become the fuel and catalyst for anti-Dasam Banee heretics when they target Sri Dasam Granth Sahib’s contents.

Guru Gobind Singh Ji actually prophesized about such individuals in his Banee:

They will proclaim themselves as religious, but despite their ill-fate they will tout themselves as great (religious) philosophers.

They will become adulterers and will fall from grace and be without honor and be neither celibate nor chaste (pure).
(Padmaavtee Cchand, Sri Dasam Granth Sahib)

According to the Sikh Rahit Maryada such individuals can only be classified as "ਬੱਜਰ ਕੁਰਿਹਤੀਏ" or "ਤਨਖਾਈਏ", not only are they then not allowed to perform religious duties and functions, but also barred from entering the Sikh Takht Sahibs.

If that is the case then the direct interference of such individuals in the affairs of the Khalsa Panth's is despicable and should never be tolerated until they seek forgiveness for their misdeeds and are reprimanded in accordance to Panthic norms.

Furthermore, their obsession to further “Bikramanize” the already muddled Nanakshahi Calendar, and also tamper and “saffronize” the Sikh Rehat Maryada in accordance to their Nirmala-Udasee oriented practices needs to be challenged at all levels.

There is little doubt that such issues are being orchestrated by pro-Sanatan religious fanatics such as the Rashtriya Swayamsevak Sangh (RSS) and the Badal (Akali) Dal backed Bharatiya Janata Party (BJP) for their political benefits in the upcoming national elections and in turn cause further divisions within the Sikh community.

Panthic organizations need to be vigilant of such groups and tactics that attempt to muddle our sovereign Sikh identity and undermine Panthic unity.

Some well-known controversies about members of the Sant-Samaj:

Should such organizations that are so embedded with corrupt anti-Sikh lobbies be allowed to gamble with the destiny of the Sikh Nation? 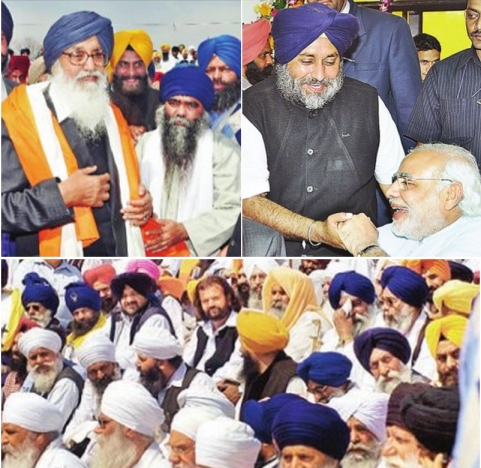