Nexus between Sikh Parchariks and the RSS revealed at Funeral 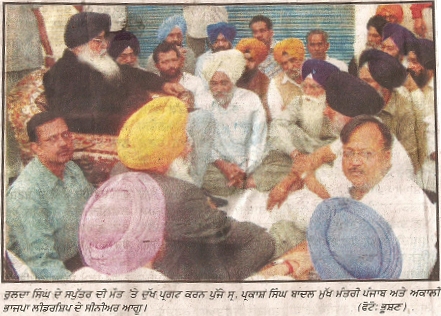 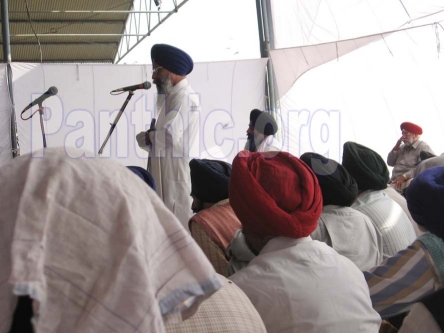 Both Prof. Manjit Singh (ex-Jathedar of Sri Akal Takht Sahib) and Giani Thakur Singh, who is currently visiting Punjab after an extended stay abroad, paid homage to Rulda's deceased son, and openly spoke about his ties to the RSS spokesman during the days when they were both students of the Mehta based Taksal. Giani Thakur Singh also sent condolences from Harnam Singh Dhumma, who for some unreported reason could not make it to the function.

Such blasphemous allegations were the key reasons that led Sri Akal Takht Sahib to call for the boycott of the Rashtriya Sikh Sangat in 2004. The boycott instructed the Sikh community to not interact or support the RSS or any of its affiliates in any manner.

In early 2006, Panthic Weekly exposed the secret nexus between many prominent Sikh leaders and the RSS in a series of articles listed below: An earlier file photo of Akal Takht Jathedar Joginder Singh Vendti and Baldev Singh, who is the spearheading SGPC's Dharam Parchar Committee and the pro-Badal Parbandhaki Panchain faction of the Akhand Kirtani Jatha, honoring Rulda Sinh of the RSS.