In June 1984, the Indian Army attacked Harmandir Sahib, popularly known as the Golden Temple, as well as over 40 other gurdwaras (Sikh places of worship) throughout Punjab. The attacks, codenamed “Operation Blue Star,” killed thousands of civilians trapped inside the gurdwaras. This assault marked the beginning of a policy of gross human rights violations in Punjab that continues to have profound implications for the rule of law in India. 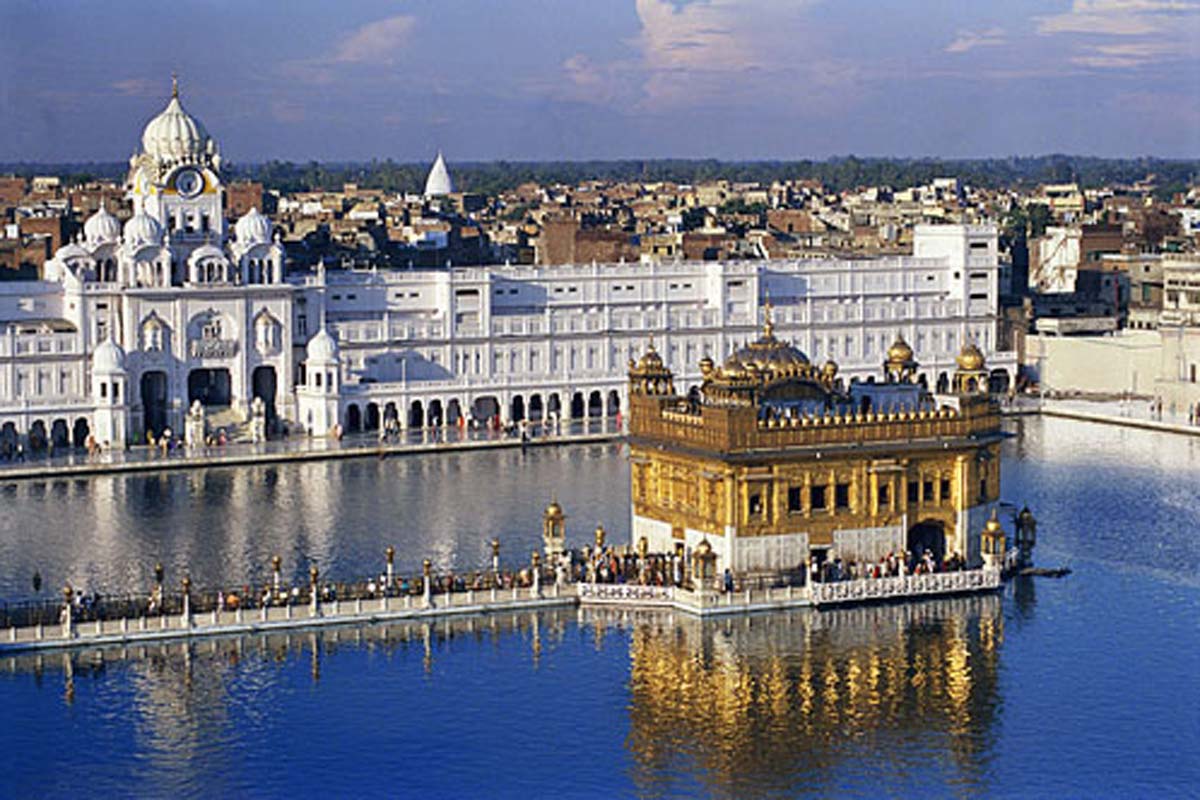 According to the Government of India, Operation Blue Star was executed to capture Sikh militants who were operating out of Harmandir Sahib complex. However, the government launched military operations during a Sikh religious holiday, when the complex was overflowing with worshipers. Eyewitnesses report that over 10,000 pilgrims were trapped inside the complex on June 3rd when the government imposed a shoot-on-sight curfew, preventing anyone from escaping. Many who did manage to leave were taken into detention. The Army began its full-scale attack early morning on June 4. 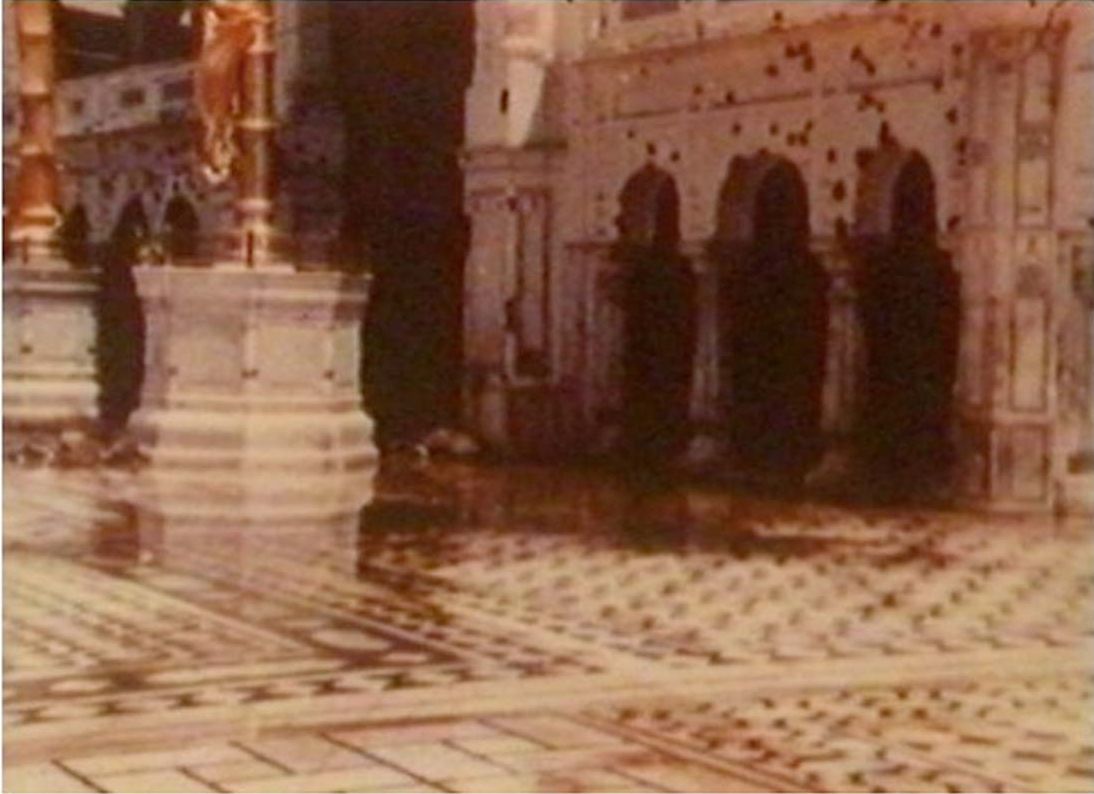 Gurmej Singh recounted to the BBC that after the curfew was imposed: “the Golden Temple was converted into a bloody battlefield with bullets ranging from every conceivable direction. We took refuge in an office room in the complex but the bullets followed us everywhere. I was hit in my hip. Many of my village mates and others were fatally wounded. It was pitch dark, hot, humid and so deafeningly noisy that one could not tell if the person lying next to him was dead or still alive.” 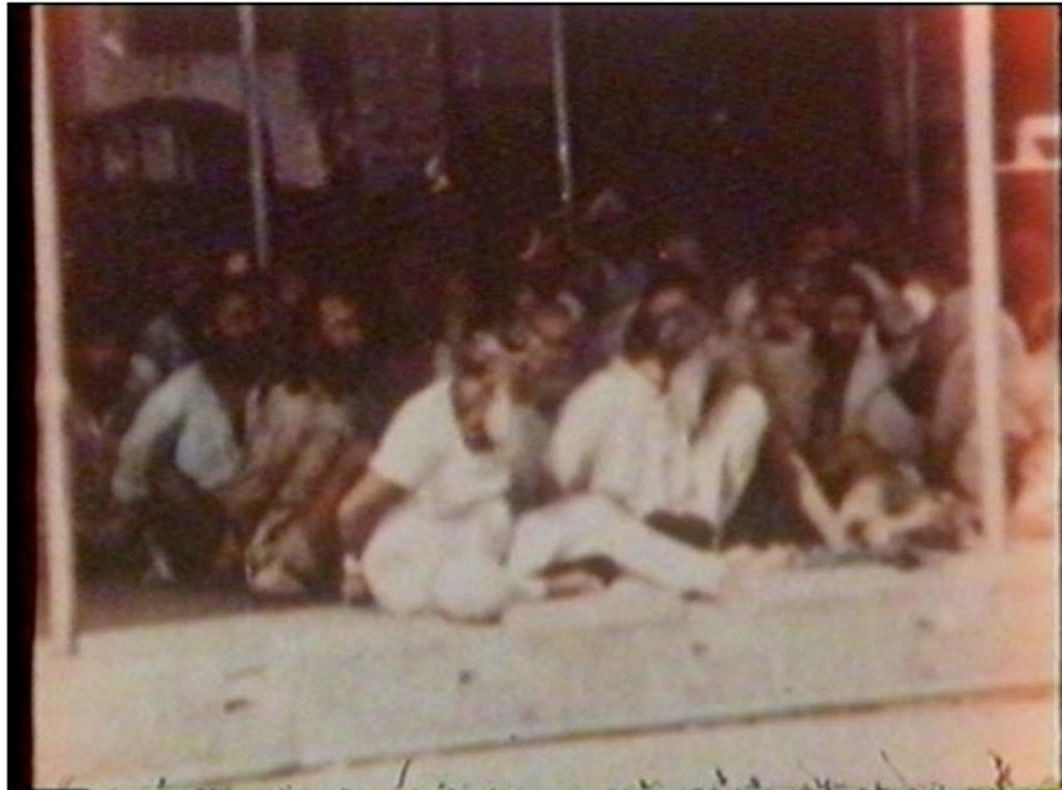 Although Indian Army officials claimed that the attacks involved necessary force with a minimal amount of casualties, Ranbir Kaur, a school teacher who was visiting the Harmandir Sahib on a field trip, witnessed the execution of over 150 people who had been locked inside the basement. Doctors who conducted postmortems reported that the hands of Sikhs had been tied behind their backs with their turbans as pictured, and they had been executed at point-blank range. 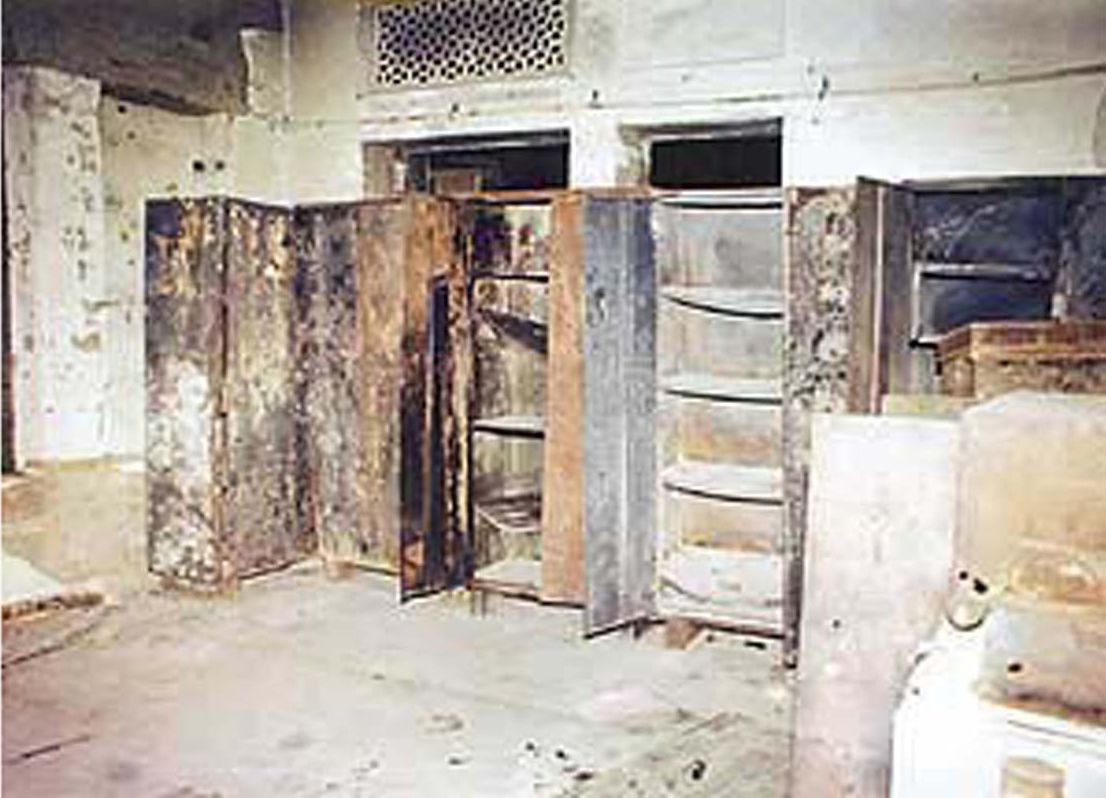 The Army claimed that it entered the Golden Temple complex with “sadness and reverence” (Tribune, June 7, 1984). In contrast, according to the head librarian, Army troops burned the Sikh Reference Library housing rare Sikh manuscripts and historical artifacts, after they had taken control of the building. Part of the burned library is pictured at right. Photo courtesy of the Tribune. 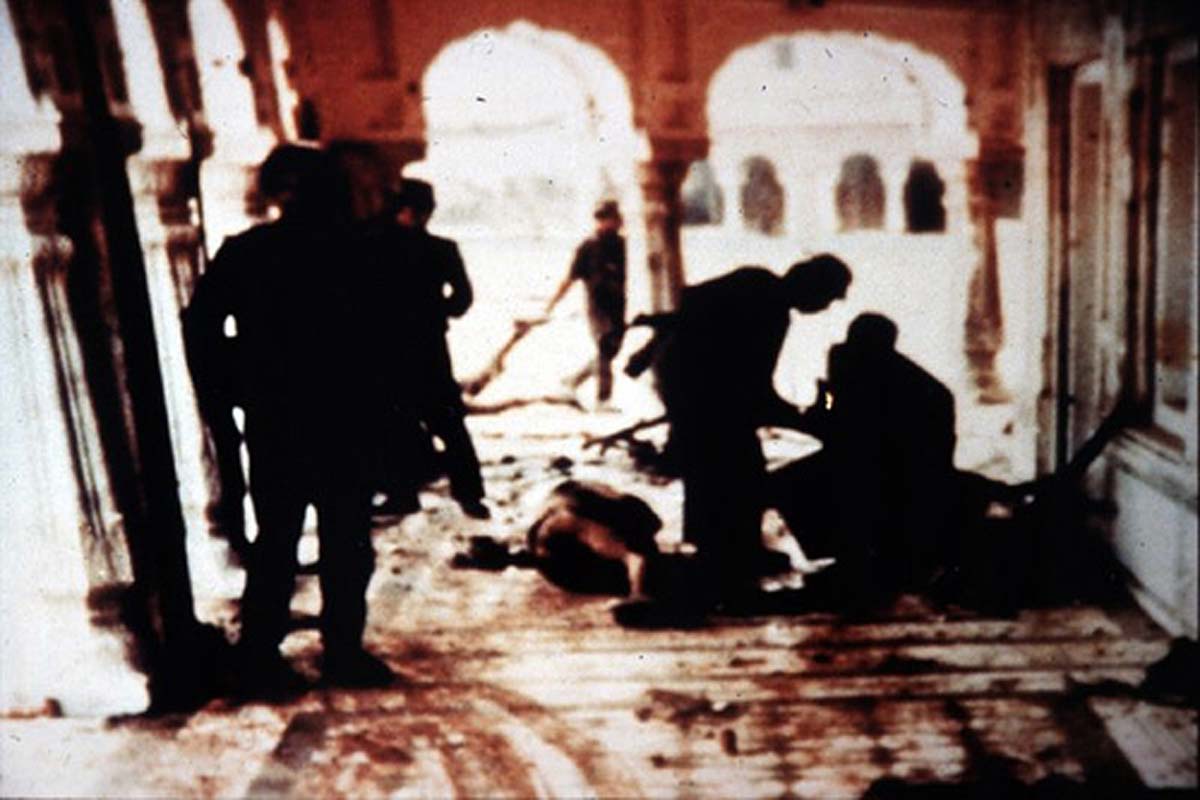 Subsequent to the attack, the Army hastily cremated the dead. According to Associated Press reporter Brahma Chellaney, truckloads of bodies were transported to nearby crematoria around the clock. Non-government sources estimate that anywhere from 4,000 to 8,000 were killed in the attack. The Indian government’s official report claims only that 493 “terrorists” were killed. The practice of “secret mass cremations” would be used for more than a decade to destroy evidence of thousands of Sikhs disappeared and unlawfully killed by the government during its counterinsurgency operations in Punjab. 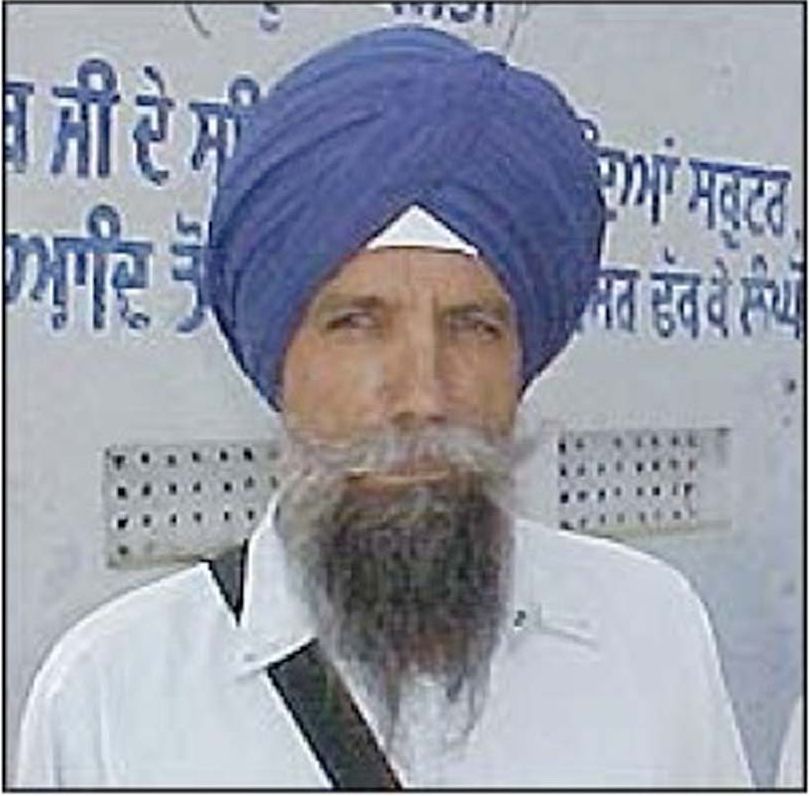 Gurmej Singh, pictured above, was among those illegally detained and tortured after Operation Blue Star. His family had given him up for dead until he was released in 1990. He was never convicted of a crime. The Indian government claimed that 1,592 “terrorists” were captured in Operation Blue Star, but never released an official list of the detained. Photo courtesy of the BBC. 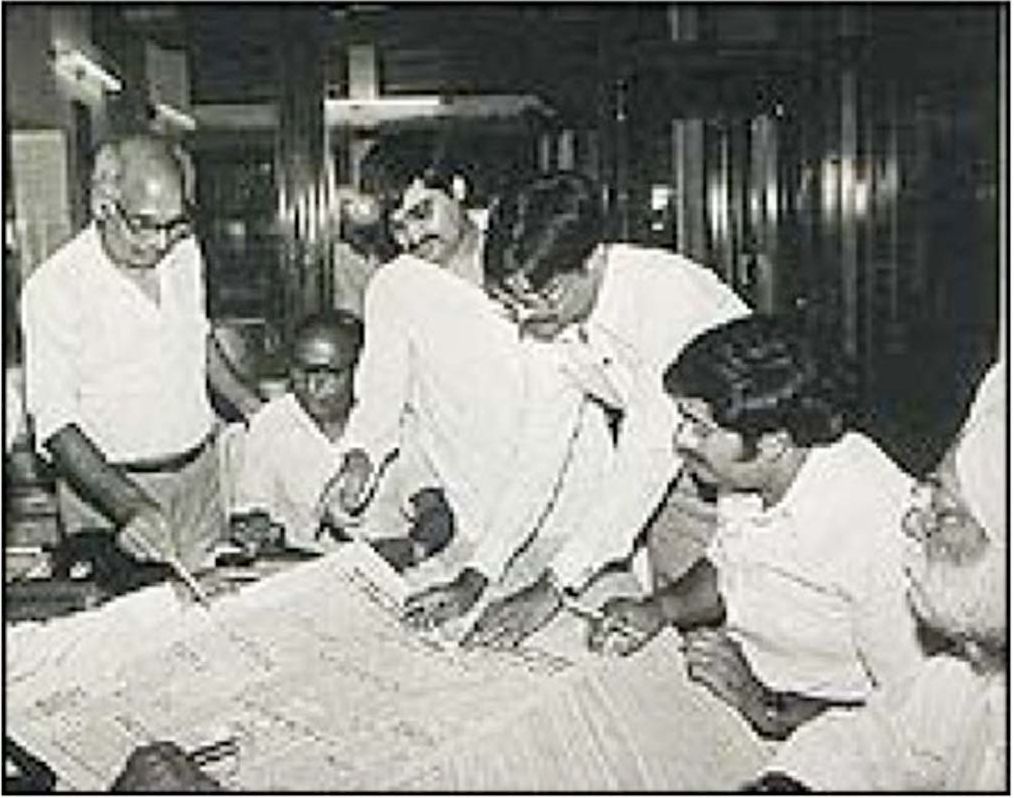 Because of government censorship, the Indian Army’s version became the prevalent version of history. Above, officials are censoring a Punjab newspaper in June 1984 (photo courtesy of the Tribune). Advocacy for human rights of Sikhs became synonymous with threats to national security, creating a climate of fear and effectively preventing domestic and international attention to state abuses.

The stark contrast between official statements of a successful “neat” operation (as mentioned in the Tribune on June 7, 1984, right), and eyewitness and civil society accounts of security forces deliberately targeting civilians and non-combatants, are paralleled throughout the counterinsurgency operations that followed the attacks.