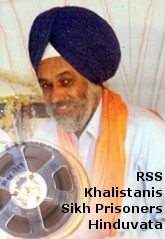 Amritsar Sahib, Punjab (KP) - As indicated in our leading article last week, Panthic Weekly (PW) is in the possession of several voice recordings made discreetly of Rashtriya Swayamsevak Sangh (RSS) representative Rulda Singh in which he reveals the alleged secret alliances between him and prominent Sikh leaders and Khalistanis.

Rulda Singh is not only a spokesman for the Rashtrya Sikh Sangat wing of the RSS, but he has also served as Bhartya Janata Party’s (BJP) NRI General Secretary, and key liaison between the RSS and the Akalis and organizations linked to the Sant Samaj.

Who is this man Rulda Singh, and what does he profess to know and do? Panthic Weekly, in this issue will attempt to clarify these questions by sharing certain audio clips of Rulda’s statements. In order to protect the identity of the individuals involved, PW is only releasing selected portions of the recording of Rulda at this point, but in the near future PW management may release the entire recorded conversations if required.

In a "Sundesh" (click to view) issued by Sri Akal Tahkt Sahib in 2005 the RSS and its "Sikh Sangat" wing were openly declared as "Panthic Virodhee" (anti-Panthic) elements, and all Sikhs were requested to not deal with them in any manner. They were barred from even participating in the 2005 celebrations of Parkash Purab of Sri Guru Granth Sahib Ji. By dealing with the RSS, our so-called leaders Sikh leaders have not only disobeyed Sri Akal Takht Sahib, but also turned their backs to throusands of Sikhs who have sacrificed their lives for the Sikh cause.

His most recent passport, freshly issued on 8/16/2005, states his father’s name as Babu Singh and his date of birth as 9/4/1952, making him roughly fifty three years old. His wife’s name is Surjit Kaur and they both live near Sirhind Road in the district of Patiala.

Rulda recently made headlines when he along with several dozen RSS connected individuals accompanied Paramjit Sarna in their infamous “Rath Yatra” to Nanakana Sahib. Many genuinely concerned parties have begun to wonder just how deep his connections are inside India’s chambers of power, and how much influence he truly has.

According to Rulda’s own admission he has plenty…

Rulda speaks of which GOI leaders are with him
“The government is with me, RSS Surdarshan, Advani Ji, Vajpaiyee, other members of his administration such as IS officers, secretaries and deputy secretaries. I have connections with all these people for this mission”.

Rulda says that his boss is ex-BJP Sumpremo LK Advani
“My boss is Advani”.

Rulda says that Sikhs are Hindus
“Sikhs are Hindus, Sikhs were created from Hindus. Our birth, death, eating, drinking, living, and marriage ways are the same as Hindus."

Editors Note: One hand, RSS is stating to Sri Akal Takht Sahib that it recognizes the seperate identity of the Sikhs and promises never to doubt that claim (see http://www.panthic.org/news/125/ARTICLE/2083/2005-12-11.html), on the other hand Rulda is openly referring to Sikhs as an offshoot of Hinduism.

While reading a document that questions how he is a RSS Sikh and a Taksal member. Rulda Singh responds that he received training from the Damdami Taksal from 1978-1983

“For a total of 5 years. O.P. Gupta, a manager for National Bank of Punjab met him in 1978 and for five years kept working to get him to join the RSS.”

External Reference:
“He claims to have received religious education from Damdami Taksal when Sant Kartar Singh was its chief and Sant Bhinderanwale was one of its students.” (RSS Had Secret Meetings With Sikh Hardliners, March 14, 2005, Tribune India)

Rulda speaks of his relationship with Sant Ji in the Damdami Taksal.

He boasts of having links with all key Khalistani activists worldwide, and claims to have tamed many of them.

Rulda says that all (you) Sikhs are idiots
“You guys don’t know anything, these people (RSS) are for real, you guys don’t have anything you just read books and then talk about each other”

Rulda says the RSS planning is years ahead.

Editors Note: Rulda attempts to praise RSS, while hinting at the lack of foresight of the Sikhs.

Rulda says that he isn’t afraid of the IB, RAW, CID as RSS isn’t doing anything wrong. Says their cause is clean.

Rulda says that they have extracted (confidentail) records/FIRs of all Sikh prisoners.

Editors Note: In other conversations Rulda displays and reads from confidential government files on not only political prisoners, but black-listed activists around the world, and boasts that only he has access to such information and the ability to help them.

Rulda talks about how he had Advani meet Sikhs in New York area and take part in various programs.

Editors Note: Names of some of the Sikhs participating in meetings with RSS will be presented in an upcoming article.

Rulda mentions that what I have shown and told you so far is nothing (tip of the iceberg) he has a lot more to show and tell.

Is Rulda just making these claims to get attention, or does this man really wield so much power and influence? One thing is certain, if a mere RSS agent can be so powerful, one can only imagine the power RAW and CBI agents wield. The boasts of this RSS agent should be a wake up call for the next generation of Sikhs as to how deep and critical the agenda and design of the RSS is to Hinduvta movement’s long term strategy.

In the last 25 years, Sikhs have been a thorn in the side of the Hinduvta movement and it is in its best interest to neutralize them in order to accomplish it goal of final assimilation of all Sikhs into the Hindu fold.

Given the historical track record of key players and entities of the Hiduvta movement, it is not inconceivable that this same design and ‘final solution’ is being applied to other racial and religious minority communities as well.

In next week’s issue of this series, Panthic Weekly will release names of key 'hardliners' who Rulda claims to have “tamed” and brought into the mainstream.