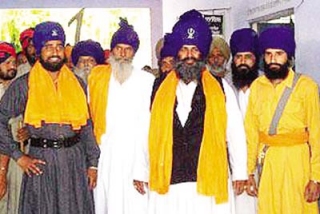 Baba Bakala, Punjab (KP) – The self proclaimed leader of the Nihang Tarna Dal – ‘Nihang’ Ajit Poohla; infamously known as ‘Nang Poolha’ in Panthic circles, is back behind bars after being arrested at Baba Bakala for destroying the standing wheat crop, and sole source of income of a local farmer, Santokh Singh of village Lakhowal, on April 6. Poohla and six of his close associates were arrested by the Beas police after a raid at Gurdwara Damdama Sahib; which has been occupied by the Nang as his ‘headquarters,’ after complaints were filed by Santokh Singh. Poohla and his gang of thugs forcibly ploughed the standing wheat crop and also fired gun shots in the air to intimidate the local villagers. For the past several decades Poolha has been given free license by the Punjab government to intimidate and harass unarmed and helpless villagers; so this arrest came as a great surprise to the police cat.

Poohla and his associates were presented in the court to Judicial Magistrate, Jaswinder Shimar, who extended their judicial remand until April 23. The tractor and the .12 bore gun used in this crime were also recovered by the police. Poolha received a citation from the police for bearing a red beacon light on his vehicle without permission. The Nang refuted the charges and stated that he had every right to use to red beacon on his vehicle since it was the police themselves who had given him ‘V.I.P’ status. Besides Poohla, others arrested in relation to this crime were: Diya Sinh Bhoot, Gurcharan Sinh Channi, Gurmail Sinh Mela, Karnail Sinh Kaila, Onkar Sinh and Ranjit Sinh.

In a press conference held outside the courtroom, Poolha told reporters that is was ridiculous for this arrest to be made considering all of his ‘services to the nation in the past twenty years.’ During the Sikh Freedom Movement in the late 1980’s and early 90’s Nang Poolha worked as a police cat and informant and was given free license by the state government to kill anyone who supported the Sikh cause. Poohla and his state-sponsored criminal gangs clandestinely eliminated dozens of Sikh families and raped/molested countless Sikh women. Along with this Poohla and his thugs would intentionally dress up as Sikh freedom fighters and then kill innocent Punjabi citizens in order to discredit the movement. Countless Sikh youth were tortured and murdered by Poohla and his gang during the Freedom Agitation; the nang supplied great support to the then DGP KP Gill and other Indian Government Officials to eliminate key figures of Sikh freedom fighting organizations.

Throughout his wave of terror, Nang Poohla has been given extra-judicial powers and given heavy security. Under the patronage of senior officers in the state police, Poohla and his gang have been equipped with arms and ammunition so that he can continue his campaign against Sikh freedom fighters, as well as innocent villagers who speak out against his tyranny.

In July of 2004, Poohla was arrested in connection with the brutal murder of Nihung Sukhdev Singh on June 20, 2002. Despite the concrete evidence linking him to the crime Poohla was later released on bail as has been the trend in the past two decades. At present Poohla is facing trial in over seven murder cases however he continues to be granted impunity for his crimes by the government and is later released with the Punjab Police as the primary facilitators. The latest murder case brought against him involved the brutal murder of seven family members at village Khanpur who were tortured at the police station in Verowal District Amritsar on June 2, 1991. An internal investigation revealed that the Nang tried to blame the murders on Sikh Freedom Fighters in order to discredit the movement.

With this most recent arrest, it is likely that Poohla will once again be released with the aid of the Punjab police. Every time he has been arrested in the past, the government has deliberately looked the other way and allowed him to continue his ruthless intimidation campaigns.

Col. G.S. Sandhu established a committee to bring Poolha to justice and tried to have him presented before Akal Takht Sahib but to no avail. The Takht Jathedars continue to remain silent on this serious issue, despite calls from Panthic organizations to have the Nang excommunicated from the Sikh Panth. Sandhu noted that though the police make these staged arrests they continue to deny justice to the victims, "They (Punjab Police) are blatantly trying to shield Poolha and his terror activities."

Along with the charges of murder, abduction, intimidation and trespassing mounting against him, Poolha also has a notorious reputation for being rapist and a womanizer as countless victims are now coming forward to expose him.

The Nang has also usurped control over numerous historical Gurdwaras throughout Punjab over the past two decades and along with stealing money from the golaks, he has also used Gurdwara property to grow and sell poppy, husk, opium, smack and other drugs.
Col G.S. Sandhu (retd), said the SGPC did not raise a finger for over 20 years even though Poohla began to occupy historic Gurdwaras one after another. Attempts were not even made to get the Gurdwaras vacated.
Colonel Sandhu further said it is widely known that Poohla and his supporters stole money from the golaks (donation boxes) of Gurdwaras for personal use and managed to acquire huge amounts of property.
In the past years, Sandhu and other Panthic voices have made numerous attempts to get Poolha and his gangs summoned before Akal Takht Sahib, however, a number of Gurdwaras are still under the control of his armed gangs and the SGPC has yet to take firm action against them. Now that he is behind bars again the people of Punjab are hopeful that he will not be released again, but given the notoriety of the Punjab police, it’s highly likely that Nang Poolha will continue his wave of terror.

Sender IP identification :3.231.25.104
By clicking on the 'Submit' button, you agree to the following conditions: