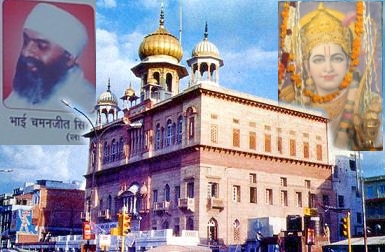 New Delhi (KP) – The backlash against RSS oriented Chaman Lal and the various puppet Jathedars who hobnob with him on occasion became apparent when these individuals recently failed to make public appearances due to public protest and personal embarrassment.

While Kesgarh Sahib Jathedar Tarlochan Singh attempted to clarify his stand to the press by pleading ignorance of Prerna function, Chaman Lal became the first causality of his own undoing when he failed to show up at the historic Gurdwara Sis Ganj Sahib for a Kirtan program he was scheduled to partake in. According to the official Delhi Gurdwara Management Committee (DGMC) schedule, Chaman Lal was to recite Kirtan at the Gurdwara Sahib from 11:55pm – 12:30am on December 31st, to mark the beginning of a New Year. 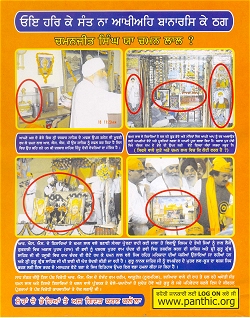 As the local sangat learned of the Panthic Weekly exposé and the fact that the DSGMC had invited Chaman Lal to Sis Ganj Sahib, their resentment grew. Protestors from various Panthic organizations began to assemble outside the premises of the Gurdwara Sahib.

The night before over two thousand posters depicting Chaman Lal at the various pro-RSS programs with the title "ਓਇ ਹਰਿ ਕੇ ਸੰਤ ਨ ਆਖੀਅਹਿ ਬਾਨਾਰਸਿ ਕੇ ਠਗ" (They are not called Saints of the Lord - they are thugs of Benares) and a printed link to www.Panthic.org were plastered throughout Sikh neighborhoods, including on the front doors of DSGMC president Paramjit Sarna and Chaman Lal’s residences. Additionally, the Sikh organizations launched a massive SMS, and e-mail campaign to everyone aware of the situation at Sis Ganj Sahib.

By the evening of December 31st, hundreds of concerned GurSikhs from various Panthic organizations, including GURSIKH, and Shahbaaz Khalsa were present inside and outside of Gurdwara Sis Ganj Sahib. While the DSGMC was adamant that Chaman Lal would do Kirtan as scheduled, the protesters vowed to not allow Chaman Lal to perform his kirtan that night.

Incensed by the protestors, DSGMC president, Paramjit Sarna, called the local District Commissioner and received a dispatch of three Delhi Police battalions in case the situation was to get out of control. The presence of the police did not deter the protesting sangat that had now grown into the hundreds with bands of twenty-five each scattered across the complex.

In a desperate attempt, Sarna had also requested the help of a batch of misguided "Dharmi Faujis" from Mohali who were asked to rough up any protester that attempted to stop Chaman Lal.

Interestingly with all the requested security and protection, and the full support of the DSGMC, Chaman Lal failed to show up for his scheduled appearance. According to the protesters, the situation for the DSGMC was so desperate that when it was getting close to midnight, the committee representatives were coming by every few minutes trying to convince the protesters to allow Chaman Lal to do kirtan even for a short time.

Shamelessly, even after midnight the DSGMC still attempted to convince the Sangat, but it was to no avail. The traditional maryada at Gurdwara Sri Sis Ganj Sahib is that no functions are held in the main hall after 12:30am, because the diwan hall needs to be cleaned and then Guru Sahib’s Parkash is done by 2:30am and Sukhmani Sahib is then recited. However, on this day the DSGMC broke their maryada in hopes that Chaman Lal would show up, and concluded their program at 1:45am.

The GURSIKH, and Shahbaaz Khalsa organizations criticized the DSGMC for even scheduling Chaman Lal at this historic Gurdwara Sahib. "How can [they] allow someone who worships Hanuman, Ganesh, and Ram Chander in the presence of Guru Granth Sahib Ji, to [do] Kirtan sewa in such a holy place ?" questioned one protesting Sangat member. The DSGMC members avoided the questioning Sangat and quietly left for the night.