Desecration of the Guru by Our Own Institutions 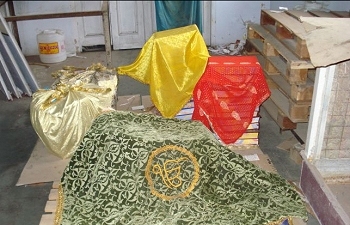 Sri Rakabganj Sahib, Delhi (KP) - Thirty years ago, thirteen GurSikhs laid down their lives in the city of Amritsar Sahib when the psuedo-Nirankari heretics began desecrating and insulting Sri Guru Granth Sahib Ji. The Sikh Nation considers Guru Granth Sahib Ji the living embodiment of the ten Gurus. Utmost respect and reverence is given to the sacred Saroops that contain the Holy Bani of our Gurus and Bhagats (saints). Three decades later, our very own institutions, are now the ones who are desecrating the Holy Saroops.

Panthic Weekly was given photographic and video evidence by Sewadars of Guru Granth Sahib Satkar Committee (India) and the Shahbaaz Khalsa organization on the reckless beadbi that is occurring at the premises of “Gur Updesh Printers”, the official printing establishment of the Delhi Sikh Gurdwara Management Committee (DSGMC) under Paramjit Sarna and company.

When the DSGMC found out this evidence was being collected, they quickly confiscated the equipment of the sevadars—but fortunately, other equipment was still in their possession with which they collected this evidence of violations. 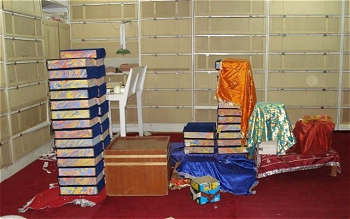 Ironically, the DSGMC has a budget of over 1 Billion (100 crore) rupees to manage Delhi based Gurdwaras, Sikh schools, and colleges. The massive complex at Gurdwara Rakab Ganj Sahib, besides the historic Gurdwara Sahib, contains the well known Lakhi Shah Vanjara Hall, DSGMC offices, and the publishing center known as Gur Updesh Printers. 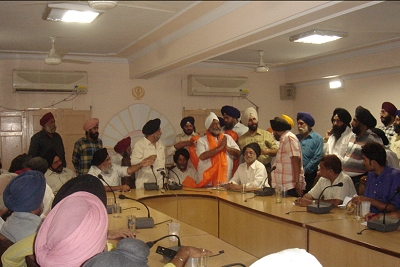 As Guru Ji's Saroops are being desecrated, the Siyaasi-masands of the DSGMC enjoy thier luxurious air-conditioned offices in the Gurdwara Rakabganj Sahib complex

Due to mis-management and carelessness, this once serene and sparkling complex is now under the virtual control of the “siyaasi-masands’ of the DSGMC.

For the last several years, the committee has been outsourcing Gurdwara seva to non-Sikhs and migrant Biharis. Their presence is known from the never ending line of discarded tobacco-bettle nut packs littering the complex. 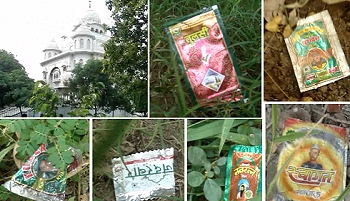 Click to video of littered tobacco pouches at Gurdwara Complex

In 2005, PW published an article “Bihari migrants desecrate premises of Gurdwara Rakab Ganj Sahib” http://www.panthic.org/news/125/ARTICLE/2097/2005-12-18.html which was an expose done by Shahbaaz Khalsa that illustrated how the Gurdwara Sahib premises was being misused and desecrated by these Bihari migrants (often referred to as 'Bhaeeyas'). These migrants continue to carry and chew tobacco on the premises of the sacred complex.

Per Sikh Maryada (Code of Conduct), alcohol, tobacco, and similar paraphernalia are not to be brought in or consumed on any Gurdwara premises. These same migrants are also in charge of the Langar Halls and other key duties throughout the complex.

When visitors at the complex come to get Saroops of Guru Granth Sahib Ji, they are taken to a well kept hall with dozens and dozens of Saroops placed on Sukhasan platforms. Yet undercover footage of the same complex revealed that Bhayeeays strolled through the Sukhasan room without covering their heads. This is a major violation of Sikh Maryada. 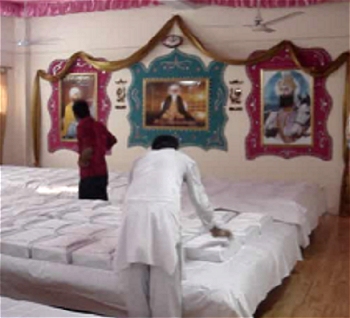 Visitors are further shocked to know that on one side, luxurious offices with marble floors, and expensive furniture are provided to Paramjit Sarna and his DSGMC staff, but behind the Sukhasan room, Sri Guru Granth Sahib Ji’s Saroops are being printed in sub-standard unkempt areas littered with rubbish and scrap.

When the sewadars of the Satkar Committee visited the printing areas, they were shocked to see so many uncovered Saroops of Sri Guru Granth Sahib Ji stacked like bricks. Many of these Saroops were literally touching the ground, with just a thin rumala between them.

Although, there was the separate Sukhasan room in the complex, it was not being utilized for these Saroops, nor was it big enough to store all of these Saroops. The Satkar Committee sewadars spent several hours relocating some of the Saroops to the Sukhasam room, so they can be given proper respect, but only so many could be moved.

As the sewadars moved throughout the complex, they saw more and more stacks everywhere, many left uncovered, and others carelessly covered by a single white bed sheet. The sewadars estimated over 300 Saroops in many of these giant stacks. There were dozens of these stacks throughout the hall.

Bhai Balbir Singh of the Satkar Committee estimated that all in all there were several thousand Saroops of Sri Guru Granth Sahib Ji being stored in that shabby complex, all without proper maryada and respect.

One of the Satkar Committee sevadars exclaimed, “How can this go on in an organization whose budget is in the crores of rupees? If they can afford, luxurious offices for themselves, why can’t [they afford] the same for our King of Kings? Why is Guru Maharaj being kept in this condition? This is totally unexcusable!” 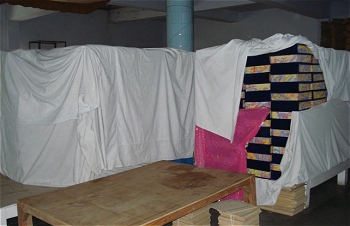 Hundereds of Saroops of Guru Granth Sahib Ji stacked like bricks, dozens of such stacks were in the comple

Another shocking scene the sewadars encountered was that damaged or misprinted angs of Guru Granth Sahib were thrown into rubbish bins, along with normal paper waste. These Angs contained the sacred verses of Gurbani, yet they were being treated like trash.

The sewadars also saw one saroop of Sri Guru Granth Sahib Ji that had been parkash on a dirty desk, there were no rumallas or chaur sahib for that open saroop. It was left unattended, with a paper inserted in it as a place holder. Again, another huge violation of Sikh Maryada. 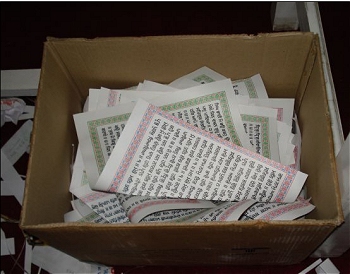 Another violations the sewadars noted was that complete single volume Saroops were being printer in Hindi and Urdu. Sri Akal Takht directive does not allow single volumes of Guru Granth Sahib to be printed in any langauge other than Gurmukhi - only Senchees are allowed.

Sewadars of the Guru Granth Sahib Satkar Committee and the Shahbaaz Khalsa recently held a press conference in which this photographic evidence was handed to the press and then submitted to Sri Akal Takht Sahib so that this beadbi (extreme disrespect) could be stopped as soon as possible. Sadly, neither the appointed Jathedar Vedanti nor the press has taken notice of these violations.

Both organizations have appealed to the Panth at large, that pressure should be put on appointed Jathedar Vedanti to take stern action against the DSGMC executives so that this beadbi in their complex can be stopped.
To the Sikh Nation there is nothing more sacred than our sacred Gurbani, it is the very form of our Guru. That is why even the paper and the ink it is written with is called blessed.

While there are those who will sacrifice everything for the respect and honor of this Sacred Holy Bani, there are many who will look the other way since it is much easier and fashionable in this day and age.

Historically, it was well known that Sikhs gained their power from the sacred Gurbani. It was so revered that Sikh kings such as Raja Ranjit Singh would always have Guru Granth Sahib and Dasam Granth Sahib on thrones higher than them, generals would take both saroops on elephants into battle as commander-in-chief.

These very detractors of the Panth have attacked not only Sri Dasam Granth Sahib, but are also undermining the reverance and respect accorded to Guru Granth Sahib Ji. The 13 Shaheeds of '78 and others throughout history gave their lives to stop this very type of beadbi happening today. In the future, will there be any Sikhs left that stand up for their Guru's respect?