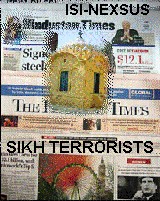 San Francisco, California (KP) – The situation that arose after Gurmeet Ram Rahim tried to mimic Guru Gobind Singh Ji left Punjab and neighboring states in a tense situation. While the Sikh nation is deeply hurt, the Indian media is working to create even more tensions for the Sikhs.

For the Indian media this type of underhanded reporting is not new and has been prevalent ever since the foundations for the country were laid down. Back then, Sikhs became the target of mobs in several places and had to leave their property and family in ruins, due to biased reporting by the media. Similar reporting showed prejudice towards the Sikhs later on during the Punjab Suba Morcha – another incident which cost the Sikhs dearly.

An increase is prevalent in the anti-Sikh characteristic of the India media during the mid-1970’s when major newspapers and TV reporters sided with the acts of the Nirankaris. Similarly during the 80’s and 90’s, the focus of the media was to turn people against the Sikhs. After the assassination of Indira Gandhi, the same media portrayed Sikhs as being anti-India which led to Hindus living in several parts of India to form mobs against their Sikh neighbors. Riots which broke out after this incident claimed the lives of thousands of Sikhs.

Although an explicit list of incidents could be noted in a chronological timetable to describe how the Indian media is committed to portray the Sikhs in a negative light, deliberation on a few recent incidents would prove the point. The recently published story of Muslims occupying a Gurdwara Sahib in Pakistan is a prime example.

The news that was highlighted by several newspapers in India as well as TV channels stated that a Gurdwara Sahib built in the memory of Bhai Taru Singh Ji has been forcefully occupied by the local Muslims. It was reported that access to the area has been blocked for the Sikhs and now the Muslims Namazis perform their daily prayers there. When a delegation of Sikhs from Delhi visited the Gurdwara Sahib to confirm the news story, they found that the Gurdwara Sahib is intact and no changes have been made to the structure. This was confirmed by a member of the delegation named Kuldeep Singh, an associate of the DSGMC, who first visited this shrine back in 1964.

The incident is also a prime example of the way the Sikh leadership works. Avtar Singh Makkar, president of the SGPC, lashed out at the Pakistan Government regarding this story, without even confirming the incident. This proves how the SGPC President is not interested in communicating with his Pakistan counterpart on these issues.

In another incident, several Indian newspapers highlighted the recently enforced law of America’s Transportation Security Administration (TSA). Although the news was of concern to the Sikhs, the Indian press once again worked to provoke the sentiments of the Sikhs by exaggerating the news. The newly enforced rule by the TSA authorized the check of dastars by patting them regardless of whether the alarm beeps from the turban or not.

While American Sikh organizations had already taken up the matter with the TSA, the Indian media had to add some flavor of its own. It was widely circulated by several Indian newspapers that the new law mandated removing of turbans and now Sikhs would have to ‘check-in’ their turban and reclaim them after arriving at their destination airport. American Sikh organizations confirmed this misconception and have stated that talks have been opened with American authorities to better facilitate Sikh travelers.

The Sikh Nation should be wary of such reporting by the Indian media. Although the press is termed as the public’s best friend and the keeper of a free society, it is not so when Sikhs are the subject of the story. Sikh leadership should also take it upon themselves to confirm the news reports through first hand sources and not rely on the Indian press.