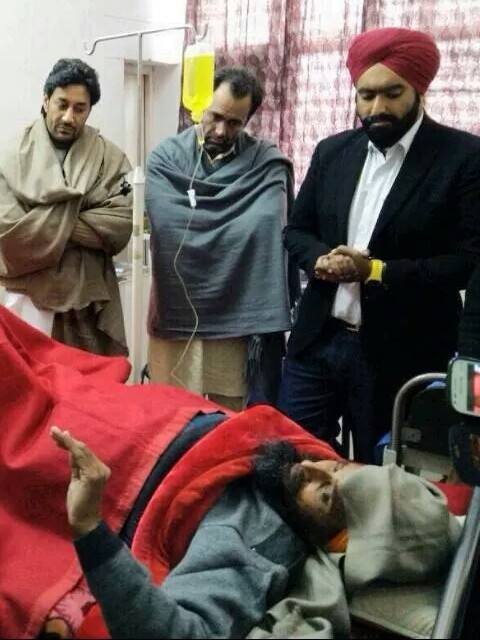 AMBALA, HARYANA (KP) - Gurbaksh Singh, the Sikh activist who had been holding a protest for the release of various Sikh prisoners, was admitted to Ambala's Civil Hospital per his family's request virtually bringing to end his second do-or-die supposed hunger-strike for freeing Sikh prisoners.

According to his son, Jujhar Singh, Gurbaksh Singh was moved to the hospital from the Gurdwara Lakhnaur Sahib complex for medical treatment upon request from his family. The family stated that he was not moved forcibly as being reported in various media outlets and social networking sites.

Jujhar Singh's statement was also published in the Hindustan Times which reported:

According to Khalsa's son, Jujhar Singh, they requested the administration yesterday to shift Khalsa immediately to a hospital "since his condition was not good". - HT (Jan 11, 2015)

In Jujhar Singh's interview, which was also aired by UK's Sangat TV, the son reiterates that the decision to move his father was taken by the family alone.

Gurbaksh Singh is currently being administered glucose intravenously at the civil hospital where doctors have declared his condition as being "stable."

It needs to be noted that this is Gurbaksh Singh's second protest in which he had declared that he had performed Ardas and avowed to either free the Sikh prisoners or die if he he fails to do so. He was also fed intravenously several times at nearby hospitals during 2013. 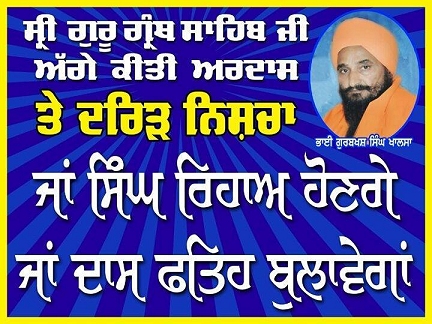 A poster from Gurbaksh Singh's 2013 campaign

Critics of Gurbaksh Singh have pointed out that while his demand for having the Sikh prisoners released is appreciated, his method of performing Ardaas and not fulfilling his pledge only denigrates the sacred Sikh Ardaas and the tradition of upholding one's word.

During his first attempt in 2013 questions were raised about his hunger-strike when it was suspected that he was taking nutritional supplements via water during his supposed fast.

Interestingly, nearly all of the staunch supporters who stood shoulder-to-shoulder with Gurbaksh Singh in 2013 have been virtually absent from his latest campaign.

His steadfast supporters contend that even though Gurbaksh Singh was not able to fulfill the wishes of his Ardas, he has succeeded in raising global awareness regarding the plight of Sikh prisoners that are languishing in Indian prisons.