Memories in the life of Bhai Rama Singh Ji 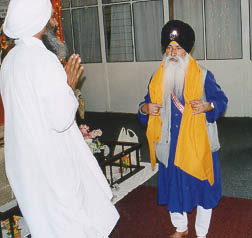 Bhai Sahib, Bhai Rama Ji was born in the year 1930 in a village of Chhariavli which is one and half miles from Aligarh, Uttar Pradesh, Northern India. His father, Vaid Chandar Pal and his mother Bibi Lashmi Devi came from a very staunch Hindu family. The family had 4 siblings and Bhai Sahib had one brother and two sisters. There was very little contact with the family and as he dipped further into Sikhi, he gave up all the attachment with the family; apparently the family shunned him from embracing the Sikh faith.

Bhai Rama Singh Ji went to the Eighth class in Aligarh, a town south east of Delhi. The turning point in his life came when he heard a sermon from Baba Rattan Das when he was eight years of age, which made a great impact in his life. He said that according to the Hindu religion, there were chauraasi lakh joon (84 million species). If a person did not remember Waheguru, then that person went through the suffering of all those forms of existence. Once caught in the cycle of births and deaths, it took a soul millions of years to get out of it. The life span of some life forms, for example of a snake may well be 500 years or certain species of fishes live up to 5000 to 6000 years or more. There is only suffering and pain in that cycle of births and deaths and no comfort at all. Bhai Sahib asked himself “Why shouldn’t I meditate on God’s name in this life and achieve salvation?” Bhai Sahib also experienced while meditating, an inner voice saying “Without the Perfect (True) Guru there is no salvation in life.”

He left the parents, brother and sisters and proceeded to Delhi and then Bombay; he was tired and fell asleep during the travel. In his dream, someone said to him, “Your attachments are due to your past deeds and one day you have to part. The Lord’s name is written in your destiny. The place where you are going will be good for you.” He started reciting Raam Raam and doing simran in the Grace of God. It began to dawn upon him that any fear will be dispelled in the Saadh Sangat, the Company of the Holy Congregation. The divine perspective in life shaped his life and he decided to come to the UK. He came to England on the 18th January 1964 by ship at Tilbury. On arrival he got his first Nitnem gutka (daily prayer book) and started saying his Mool Mantar. He was blessed with ridhian sidhian (supernatural Powers) and his mission started in the UK. He came to Southall and started his first Rain-sabaaee Kirtan, continuous all night singing of the Gurbaani kirtan and ambrosial simran of Waheguru at the Southall Gurdwara; this spread further to other Gurdwaras.

Bhai Sahib had tremendous energy and the charisma to motivate the youngsters to embrace Sikhi and be part of the Amrit paarchhar and he went with Saadh Sangat on yatra trips to Nankana Sahib, Anandpur Sahib and Hem Kunt Sahib. He also actively encouraged Amrit Chhaknaa and immersed in Amrit paarchaar sewa during his visits to the Far East (Malaysia, Singapore and Indonesia), Makindu and Kericho, East Africa, Vancouver, Canada and USA. The sangat was mesmerized by his physical presence, his selfless sewa, simplicity, humility and his unique ability to keep the spirits of others in the Power of Naam.

Bhai Sahib Ji epitomized humility and regarded himself as a Servant of Satguru Ji. He was a strong advocate of the principles and practices that we must live to serve and please only Satguru Ji and not others. I know of many people inspired by Bhai Sahib have put these principles in practice and this has become an integral part of their daily living. All those who met and came in contact with Bhai Sahib Rama Singh Ji would be touched by the unstinted love he had for everyone. Acting as a beacon of light, Bhai Sahib would guide and direct the Sangat to Sri Guru Granth Sahib Ji as their Guru and encouraged daily simran. Bhai Sahib also gave great importance of cleaning the shoes of the Sangat as a very High Sewa.

For over 30 years, Bhai Sahib was at the forefront of Sikhi parchaar in Europe and performed unceasing selfless sewa. He went on numerous Amrit parchaar tours worldwide to spread the message of Sri Guru Nanak Dev Ji and participated as one of the Panj Pyaare in Amrit Sanskaar ceremonies.

He was gifted, approachable and accessible, commanding intense love and respect from the Sangat or the congregation. He was actively involved in Kirtan Darbar participating wholeheartedly with the Sangat, the youth were especially dear to him. Bhai Sahib also was keen on gardening and he preferred to be with nature, nurturing and tending to plants. He constantly encouraged the Sikh youths to do amrit vela simran and stressed nimrata, humility, and urged them the need to build a jeevan (fruitful life). He also emphasized to do as many mool mantar as one can. Infact, he started targets for example 10,000 mool mantar by giving little counter to people which they click to increment the counter. What an incentive and it is a brilliant concept for Bhai Sahib to think on one-pointed mindedness on Naam?

Guru Tegh Bahadur stated: suKu duKu ijh prsY nhI loBu mohu AiBmwnu ] khu nwnk sunu ry mnw so mUriq Bgvwn ]13] "One who is not touched by pleasure or pain, greed, emotional attachment and egotistical pride - says Nanak, listen, mind: he is the very image of God. ||13||" (Ang 1427, SGGS). Bhai Sahib was free from all this and he was to so many of us a living image of God, in the Form of True Khalsa, immersed in Naam. Always serene, full of love and affection.

Bhai Sahib also advocated the power of Naam. He said without naam life is totally wasted and futile. He expresses in a poetic verse and gets the message across to the Sadh Sangat in his book:

“They have not accumulated the treasure of Naam
How can their Panth prosper?
(You) do not meditate on the Naam in the morning
You are wasting your life.

Only recitation of the Naam will give you peace
Forget not your (true) home
By reciting the Naam you gain respect
The cycle of birth and death will be terminated.

Only the One Naam will go with you
All wealth will be left behind
Through good fortune did you get the human body
Do not waste it.

If you give up arrogance
You will get respect hereafter
You will be freed from birth (Chauraasi lakh joon or cycle)
And always remain in a state of tranquillity.”
(Bhai Rama Singh Ji)

Bhai Sahib also taught the sangat the way to recite Gurmantar. There are two methods for reciting Waheguru: the first is to recite the word Waheguru and the second to repeat Waheguru with every swaas (life breath). The method for repeating Waheguru with every swaas is taught by the Panj Pyaare. In this way, by doing swaas swaas simran in the early morning, a time comes when the swaas begin to ascend to the forehead (Trikuttee, a spot between the eye-brows) and one experience as follows: rI klvwir gvwir mUF miq aulto pvnu iPrwvau ] mnu mqvwr myr sr BwTI AMimRq Dwr cuAwvau ]1] “You brawling, ignorant person of low mentality, reverse your breadth and turn it inwards. Let your mind be intoxicated with the stream of Amrit, Ambrosial Nectar, which trickles down from the furnace of the tenth gate (Dasam duaar)” (Ang 1123, SGGS).

Bhai Sahib left behind memories amongst the sangat and on his Barsi the whole world gets emotional and memories get rekindled. It is now just over 3 years Bhai Sahib passed away on the 1st. August 2002 at the age of 72 at amritvela. The Sikh community continues to love and remember him; in sharing his thoughts and experiences, Bhai Sahib completed an autobiography entitled: ‘In Search of the True Guru’ – ‘Roop Gobind Ka, Raj Khalsa Ka, Sikh Sonay Ka’. The book covers his childhood, search for the True Guru, Selfless Service with Humility and Khalsa Raj. It is worth reading as it reveals the main reason for our existence and to achieve complete jeewan muktee as Bhai Sahib advocated is to Naam Japna and selfless sewa to the community without looking for recognition.