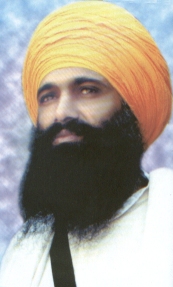 In the Jagraon District of Punjab is a very blessed village called Koanke. The Master of Miri Piri, Sahib Siri Guru Hargobind Sahib Ji blessed this village stating diamonds would be born from this village. Guru Ji stated this when he rested at the village on his journey to the Sind region. When he stayed at Koanke village, one of its resident Gursikhs, Bhai Hira ji did keertan seva. Guru ji was very moved by the keertan and at this point stated in a 'Bachan' that many more diamonds would be born here.

So it happened, aswell as Bhai Hira Ji, Sardar Sham Singh Attari, the Great Mata Kishen Kaur Koanke, Bhai Gurdev Singh Koanke, and many countless young Gursikhs who have given all to the Sikh struggle, all were born in the village Koanke.

The list of names that stood by the mission and ideologue of Baba Jarnail Singh Bindranwale from this village is long, but one name stands out. That name is Jathedar Gurdev Singh ji.

Bhai Gurdev Singh was born in 1949 in house of Bhai Gurdial Singh and Mata Chand Kaur ji. Bhai sahib`s grandfather was Jathedar Totha Singh, who was a companion of Baba Nand Singh ji of Nanaksar. Hence Gursikhi was a part of the family tradition.

At a young age, Bhai Sahib was blessed with Amrit at the Siri Akal Thakhat Sahib. Bhai Sahib`s worldly education was only up to level 6. However he continued to study in his religious study at the Damdami Taksal. He was tutored by Baba Vir Singh Madoke and Giani Inder Singh Badniwale, both of whom were companions of Baba Gurbachan Singh Khalsa. From here Bhai Sahib began to do seva of katha of Sahib Siri Guru Granth Sahib and Dasam Granth.

Due to the fact that Bhai Sahib inherited considerable land, his family needs were always satisfied, and therefore Bhai sahib always did katha in a Niskam nature.

Bhai Sahib was a very strict Gursikh and followed the practice of Gurmat Bibek. This meant that would only eat food prepared by Amritdhari hands. Bhai Sahib was also strict in his Amritvela, rising everyday at 2am. From 2am to 8am, Bhai Sahib would do his Nitnem, and would never speak to anyone during this period. Bhai Sahib was very influenced by Baba Jarnial Singh Bindranwale. Throughout the Dharam Yudh Movement, Bhai Sahib with his whole family would accept imprisonment.

Operation Bluestar in 1984, had a deep impact on Bhai sahib. From this period, Bhai Sahib in his katha openly started condemning Brahmin authorities, and their devious practices. Due to the sincere nature of Bhai Sahibs character, the parchar that Bhai Sahib did had a lot of influence on the sangat. Bhai Sahib was against all types of Gurudoms, santdoms, and as a result of his parchar in the Jagraon area, many deras, businesses of Brahminvad, blind worship and ritualism were eradicated from every village and town.

Due to Bhai Sahib's parchar, the drug ridden area of Jagraon, witnessed many Amrit Sanchars, and kesri dastars and black gatras could be seen everywhere. Once again the Malwa region strangled by drugs, witnessed a Khalsa revolution. At weddings, where previously dirty songs were heard, now Gurbani keertan was heard. In buses, the Bollywood songs were replaced Dhadi Vars and religious songs. Much of this social change was credited to Bhai Gurdev Singh ji.

As a result of this, in January 1986, Bhai Sahib was chosen to the highest Seva in the Khalsa Panth, the Seva of Jathedar of Siri Akal Thakhat Sahib ji.