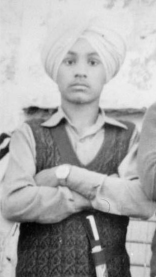 Those families with whom Bhai Ravinder Singh stayed with all say that he did not come and stay as a guest or to issue orders and that he became like a member of the family and even helped around the house. For a period of two months, Bhai Sahib was told to stay in Gurdaspur amongst the relatives of a Singh in the Babbar high command. The families were not Gursikhs and the men were drunks and gamblers. It was because of this that the families would not be suspected of hiding Bhai Ravinder Singh. It seemed like a difficult task for a Gursikh to stay in such an environment, but Bhai Sahib did not complain. He continued with his naam simran and recitation of Gurbani and his humble personality drew everyone close to him. Bhai Ravinder Singh left such an impression on those he stayed with that after he left, they arrived at the next Amrit Sanchar on the back of tractor trolleys and all went to receive the gift of amrit. The Singh in high command laughed that he had not been able to influence his relatives all his life yet Bhai Ravinder Singh had transformed them in just two months.

Bhai Sahib had access to the money of the Jathebandi and distributed it to families who needed help. Ravinder Singh was visiting one of his relatives once, when the relative commented that his family's financial situation was quite stressed and that if Singhs came to his home to eat it would be nice if he too could receive some money. Bhai Sahib asked, "Do you have flour?" The relative replied, "Yes, of course…" Bhai Sahib then said, 'When Singhs come, make parshadas and serve them with salt. I can't give you this money. It is dasvandh of other Singhs and eating it is poison. How can I give my own family poison?' Even though that Singh's need was genuine, Bhai Ravinder Singh did not want anyone to think that he was giving the Jathebandi's money to his own relatives for profit.

While in the freedom movement, Bhai Sahib found it almost impossible to keep bibek. He began to eat at vegetarian restaurants. Once while eating, he found a bone in his food. Despite all risks, he appeared at the next amrit sanchar to seek forgiveness. He told the Panj Pyarey what had happened but they replied that they would not give him amrit again as he might repeat this mistake in the future. Since he could not keep bibek living such a lifestyle, what was the point of appearing they asked? Bhai Sahib became very emotional and one of the Singhs doing seva recounted that he replied, 'Death can come at any moment on the path I am walking. I don't want to die without being forgiven. I cannot risk dying as a patit. Please forgive my mistake and I pledge that from now on, despite the difficulties, I will only eat food prepared by amritdharis.' The Panj Pyaaray were moved and gave him amrit once again. After this, Bhai Sahib was very strict and he would go hungry for days but only eat food prepared by amritdharis.

In Bhai Sahib's final letter to his brothers, around 1991, he wrote that although he had joined the Sikh Movement for the liberation of the Panth, it was not as he had expected. He wrote that the Movement was not following Tat Gurmat and many leaders were breaking rehet. He advised his brothers that they should not follow in his footsteps unless their father gave them permission first. He continued that he was too far in to return and he was determined to be a Shaheed. He had the opportunity to escape, but he would not.

Bhai Sahib's family did not hear from him for quite some time. After some months, they sent word to the Babbar High Command to ask what had happened to their son. The reply they received was that while crossing the border with Bhai Gurdeep Singh Vakeel and a member of the Panthic Committee, they had been sighted, and in an encounter the two Singhs had been martyred however there was no word on Bhai Ravinder Singh's fate. They said that they were quite sure that he too had died since there had been no word for some time now and that if he had been caught, the organization would have suffered a loss.

Bhai Sahib was familiar with both the High Command and the workers and since neither had suffered any losses, it was likely that he had not fallen into the Security Forces' hands and had died in an encounter. They said that if he had been caught, being of such a young age, it was likely that he would have given some information since no one can bear the torture they inflict.

The High Command Singhs said that Bhai Ravinder Singh was like a flower which blossomed only for a few days and though he had a short life, gave a fragrance that would never be forgotten. But, they said, he also had his faults. When his family asked what faults those were, the Singhs replied, 'First, we had told him that his picture had been given to the police and they could now identify him and that he should tie his beard to conceal his identity. He flatly refused to do this. Second, we asked him to carry a cyanide capsule in case he was captured but he also refused to do this. Finally, when crossing the border, he would never wait for our 'all-clear'. He used to say that life and death are in Guru Sahib's hands and when it was time for him to die, nothing could save him.' Bhai Sahib's family remarked that these might appear to be weaknesses for the High Command, but were qualities of a Gurmukh for them.

Months passed and a friend of the family who lived far away asked Giani jee if he had heard from his son. Giani jee remarked that the Babbars had told him that Ravinder Singh was likely Shaheed. The friend said that this was impossible since just a few weeks earlier, he had seen Ravinder Singh in police custody, being taken in a Gypsy (jeep). He said that he noticed a Singh with his face covered being taken in a vehicle and those with him were in plain clothes. The friend was also on the road and the Singh put his hands together and gave him a Fateh. He did not recognize this person at first, but caught up to the Gypsy again and motioned for the Singh to uncover his face. The Singh managed to do so and he recognized that it was Bhai Ravinder Singh. The Gypsy then sped up so it could not be followed and so the two could not see or speak to each other any further.

It is now known that Bhai Ravinder Singh was wounded in the encounter at the border. He had gone to Delhi to seek treatment. Someone informed the police about his whereabouts and he was surrounded. Bhai Sahib had a pistol but when he tried to fire, it jammed. He was arrested. Bhai Sahib was severely tortured for days but did not reveal anything. If he had spoken, both the High Command and local workers would have been eliminated. After some time, the police decided to try a new tactic. They isolated him in a cell and did not bother him any further. Bhai Sahib lived like this for some time but then thought that it was not right for a Singh to live in such a manner. Either he should escape or become Shaheed while trying. He grabbed a prison guard's gun and attempted to escape but was captured once again. This time, Bhai Sahib was again tortured savagely and his soul left his body for its eternal place in SachKhand.

Bhai Ravinder Singh Babbar (Bagga) had a very short life but the fragrance and light his life left behind will continue to inspire Gursikhs forever. He was a Shaheed in the truest sense of that word.

Sender IP identification :3.238.130.97
By clicking on the 'Submit' button, you agree to the following conditions: