Amritsar Sahib (KP) April 13th, 2006 - In another deliberate attempt to spread its anti-Sikh philosophy, the RSS is organizing a “Vaisakhi” function in which it has openly invited the key leadership of the Delhi Sikh Gurdwara Management Committee to “inaugurate” a special “Vaisakhi” edition of “Sangat Sansar.”, its known instrument of poisonous propaganda. This information was relayed to Panthic Weekly by Panthic organizations, GURSIKH, Shahbaaz Khalsa, and the Khalsa Alliance. 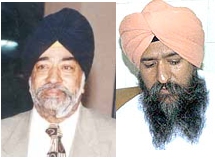 Other invitees include, Karnail Sinh Gareeb, reportedly from the USA, Tarlochan Sinh, former chair of NCM, and Joginder Sinh, former director of the Indian Central Bureau of Investigations (CBI). The function is to be held in New Delhi on April 16, 2006.

“It seems the current Delhi Sikh leadership still has not learned its lessons even after the Bhani Murti scandal, and the Rath Yatra fiasco”, stated, one member of Shahbaaz Khalsa. Interestingly, Paramjit Sarna’s name along with other “dignitaries” appears on the official colorful invitation published by an organization calling itself the “Sangat Sansar Society.” The contents of the flyer itself was criticized because it depicts bhangra and giddha dancers side by side pictures of Guru Gobind Singh Ji along with quotes from Gurbani.

Close up of logo on RSS Invitation

“Sangat Sansar” is the official magazine of the Rashtrya Sikh Sangat wing of the Rashtriya Swayamsevak Sangh (RSS). The supreme seat of Sikh authority, Sri Akal Takhat Sahib, in a memorandum released in July of 2004, instructed the Sikh Nation to boycott both RSS organizations due to their anti-Panthic activities and agenda. In November of 2005, RSS spokesman Rulda Sinh accompanied Sarna during the much criticized “Rath Yatra” of the golden palki to Nankana Sahib, Pakistan.

GURSIKH, and other organizations have launched a complaint to Sri Akal Takhat Sahib, and have recommended strict action be taken against those who participate in this RSS function.

Meanwhile, pressure is being put on Paramjit Sarna not to attend, but time will tell whether he will respect the wishes of Sri Akal Takhat Sahib versus the anti-Sikh vote bank constituency.

Below are images of the RSS Hindi flyers with translations done by Panthic Weekly. 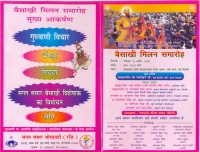