Selma, CA (KP) – The Jathedars of three Takhats along with the SGPC secretary, and Darbar Sahib manager became embroiled in another controversy when they avoided Panthic Sangat and Gurdwaras, yet visited institutions that did not follow the maryada implement by Akal Takhat Sahib and violated Hukamnamas barring tables and chairs from Langar halls.

When they did visit a Gurdwara Sahib where Panthic maryada was followed, they declined to intermingle with the visiting Sangat. On April 20th, Akal Takhat Sahib Jathedar, Joginder Singh Vedanti, Takhat of Sri Keshgarh Sahib Jathedar Tarlochan Singh, Takhat of Sri Patna Sahib, Jathedar Iqbal Singh along with SGPC secretary Dilmegh Singh, Darbar Sahib Manager Roop Singh, and Granthi Ranjit Singh from Delhi visited the newly built Gurdwara Kalgidhar Sahib in Selma. It was their first stop on this trip at a Gurdwara where Akal Takhat Sahib maryada was actually being followed. All of their previous stops were at private deras and institutions, such as the 3HO and Nanaksar.

Despite the evidence of Idol Worship, the Jathedars stayed quiet

Nanaksar 'Gurdwara' in Fresno where Vedanti and Jathedars Visited

Upon arriving, they gave their usual standard speeches, and spiels of, “Support Akal Takhat Sahib, do Sikhi parchar…..”. Waiting for them were anxious local Sangat members, sevadars from as far as Los Angeles, Sacramento, and the Bay Area, some having driven several hundred miles so they could meet with Jathedars and discuss critical issues of importance. They included Bhai Bhajneet Singh, Bhai Prabhsharandeep Singh, Amardeep Singh and many others.

After some short speeches by SGPC secretary Dilmegh Singh, and Darbar Sahib manager Roop Singh, Jathedar Tarlochan Singh, Granthi Ranjit Singh of Delhi, Bhai Prabhsharandeep Singh spoke from the podium and welcomed the Jathedars. He then stated that the Sangat here is fully supportive of Sri Akal Takhat Sahib, and that of the actions taken against Gurbaksh Kala-Afghana, and the Joginder Singh, editor of Spokesman. 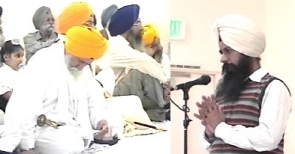 These are good steps Prabhsharandeep Singh indicated, but questioned why more was not being done in isolating those who continue to support Kala-Afghana and the Spokesman editor. He also questioned why the Jathedars attended a function organized by the 3HO, which he stated was as a cult. “During the function, which was broadcast by SikhNet, Jathedar Sahib referred to Yogi Bhajan as ‘Sri Singh Sahib’”, Prabhsharandeep Singh strongly protested. “How can the Jathedar of Sri Akal Takhat Sahib refer to anyone with that title? There is no precedence of it in Sikh history for anyone having such a title” he later added. Not expecting this line of questioning, the Jathedars were taken aback. Out of embarrassment Jathedar Vendati kept his head lowered when questioned.

Several other speakers had also given their names so that they too could address the Sangat, but the Jathedars by now had become nervous, and immediately signaled to the management committee that they were not comfortable with this venue and that no one else should be allowed to speak. This move irritated the rest of Panthic individuals who wanted to be heard, but Jathedar Joginder Singh Vendati then pre-empted the time from the other speakers and walked to the podium to speak, causing some minor commotion amongst the committee members and the visiting Sangat.

Out of respect, the rest of the sevadars sat back down quietly in the Sangat to hear what Jathedar Vendanti had to say. Instead of answering the queries put forth by Prabhsharandeep Singh, he digressed into other unrelated topics. The visibly shaken Jathedar claimed that “…this was not the setting to discuss such issues, and that if a discussion was to take place it must be done after the completion of this diwan”. He them implied that he was willing to sit down with anyone and entertain any and all questions from the Sangat.

Afterwards, one of the sevadars from Los Angeles, Bhai Jhalman Singh, spoke from the podium and confirmed with Jathedar Vendanti that… “…..if they (the Jathedars) sit down afterwards then they would not ask for time in the diwan.” Jathedar Vendanti along with others agreed and gave their commitment to sit down after the diwan. This move was endorsed with a loud Jaikara from the Sangat. The diwan then concluded with the recitation of Anand Sahib, Ardas, and the reading of the Hukamnama.

In the conclusion, the head Granthi of the Gurdwara spoke and suggested that the Jathedars only visit those Gurdwara Sahibs where Panthic maryada is followed and that instead of making their accommodations at people’s homes, they should stay in the Gurdwaras so they would be more accessible to the general Sangat.

It needs to be noted that though the Jathedars do stay at the private residences of questionable wealthy individuals, such as liquor store owners, deradars and rich landlords has been criticized by many, their response is always, “They are the ones who pay for our tickets, so we stay with them.” As recently as last year, all the Jathedars were being entertained by Baba Daljit Singh of Chicago of ‘Motel Wakunda’ fame.

The Jathedars would not answer queries about why they made so many trips to Baba Daljit Singh’s dera when they were warned by the Sangat on multiple instances not to associate with him.

Breaking their word to the Sangat

Once outside, the Jathedars quickly backtracked on their commitment to sit with the Sangat, and began walking towards their cars. “Aren’t you going to sit with the Sangat now?”, one sevadar asked. Jathedar Vedanti was hesitating, but quickly SGPC secretary with others began to frisk him away pushing sevadars aside. This followed to a momentary confrontation between one of the young sevadaars and the secretary Dilmegh Singh, which was promptly brought under control.

As tempers continued to rise, the Jathedars were now scattered throughout the front parking lot and surrounded by various Sangat members questioning why they are running away. 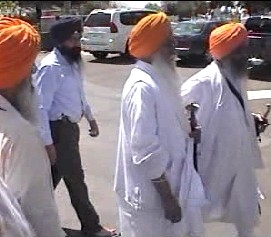 Jathedars Vedanti, Iqbal Singh, and Tarlochan Singh being escorted away from Sangat

Video of Jathedar Vedanti and Sangat


One of the trip organizers mentioned that they had a prior engagement in the North Stockton-Lodi area.

Amongst the chaos, Jathedar Vedanti and others were whisked into a minivan and escorted off the property but then quickly pulled off the road when they realized that their companions Dalmegh Singh and Roop Singh were left behind. The two were still being questioned and chastised by the angry Sangat as to why the SGPC was controlling the Jathedars to be used as puppets for their own selfish means.

PW: What about publishers Chatter Singh Jiwan Singh who are publishing and selling saroops of Guru Granth Sahib Ji against Akal Takht Sahib Maryada ?
Jathedar Vedanti: …….(does not answer question, his minivan sped off)

The Jathedars were to attend the foundation laying ceremony of a new Gurdwara site in Lodi California. As one of the Singh’s questioned: “The new Gurdwara in Lodi? You mean that place that is run by ‘communists’, and supporters of Shergill’s brother?” referring to Hardev Shergill, a staunch supporter of Kala-Afghana, who was excommunicated from the Panth by Sri Akal Takhat Sahib. Hardev Shergill is rumored to also be involved with the same group since he had closed his dera in Roseville. In 2004 Shergill along with Gurtej Singh IAS, presented a ‘gold medal’ to Gurbaksh Kala-Afghana in Roseville for challenging the authority of Sri Akal Takhat Sahib, and the Panth. 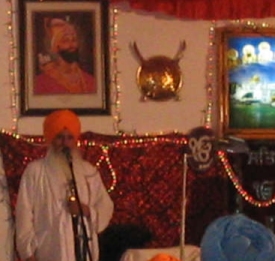 Nevertheless, it did not matter to the Jathedars regarding their questionable destination nor that they were backing away from their commitments to the Sangat in Selma. They were more than anxious to leave the Sangat’s questions unanswered. Stated one Sangat member, “This instance only provided more evidence to fuel growing resentment in Panthic circles concerning the activities of the Jathedars and the SGPC officials’ abroad. We fully support the actions taken against Kala-Afghana, and the Spokesman editor, but why be silent on other issues such as Badal, derawadis and those who violate the Hukamanamas?"