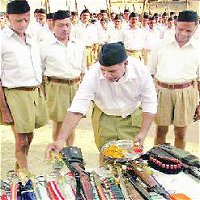 Punjab (KP) -India’s right-wing Hindu nationalist organization, the Rashtriya Swyamsevak Sangh (RSS) has once again, meddled in the internal affairs of the Sikhs when it asked its political wing Bhartiya Janta Party (BJP) to sever ties with the Akal Dal Badal if it does not persuade Sri Akal Takht to rescind a “sandesh” barring Sikhs from dealing with the RSS and its underling the Rashtriya Sikh Sangat.

Panthic Weekly was informed by confidential sources that Ajaib Singh Mukhmailpur, a former PWD minister, has been working as a liaison between the Takht Jathedars, SAD (Badal) and the RSS in an effort to get the “sandesh” withdrawn. While Panthic organizations are unanimously against the withdrawal, politicians such as Parkash Badal have a stranglehold on the Takht Jathedars, so anything is possible.

Rumors are ripe that Jathedar Vendati is overdue for a possible removal by Badal, it could become reality if the former declines to toe the latter’s line.

The “sandesh” which was issued by Sri Akal Takht Sahib in 2004 has been one of the main topics of discussion in the last two meetings of the RSS. The meetings were held in the city of Amritsar and Jhandewala by the Punjab unit of the RSS. In the final meeting, the RSS decided to move forward its withdrawal demand to the BJP.

A senior Akali leader dismissed the BJP pullout threat as a ploy to get the directive revoked. "The BJP has been asked to question the Akali Dal on this issue, and exert pressure on them to get the letter revoked," a party insider told a reporter from a Punjab daily. ''Moreover, the party in charge of Punjab, Arun Jaitely, has already met Parkash Badal recently and they can handle the issue well," he further added.

During celebrations of the 400th Parkash Divas of Guru Granth Sahib Ji, the Rashtriya Sikh Sangat wing of the Rashtrya Swayamsevak Sangh (RSS) attempted to insult Sri Guru Granth Sahib Ji by 'labeling' Guru Sahib as a Hindu Granth and purposely misinterpreting quotes from Gurbani. They had also planned a march onto Sri Akal Takht Sahib, with blessings from Akali Dal (Badal). This plan was subsequently thwarted by Sri Akal Takht Sahib and Panthic bodies. Following a series of meetings and consultations with Panthic organizations, Jathedar Joginder Singh Vedanti released a memorandum of boycott against the RSS and Rashtrya Sikh Sangat, highlighting that all Sikh organizations, jathebandis, societies and Gurdwaras should not support them in any manner.

Due to the upcoming elections, this is a suitable moment for the RSS to leverage the BJP and the Badal Dal, political analysts suggest. It is predicted that the BJP would not contest the elections by itself, and hence allied itself with the Akali Dal Badal.

Sender IP identification :3.214.184.250
By clicking on the 'Submit' button, you agree to the following conditions: