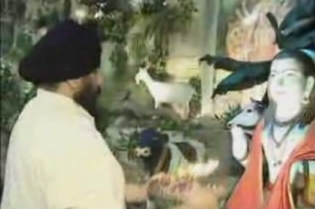 A Pagri-dhari Hindu worshipping an idol at Ek Niwas

Wolverhampton, UK (KP) - Last week, Panthic Weekly received videotaped pieces of evidence from Sangat which illustrated the sacrilege and violation of Gur-Maryada currently taking place at the Ek Niwas Institute in Wolverhampton. It is being claimed that sacrilege had been going on for quite some time though UK Gurdwaras, in particular the Midlands Gurdwara Sahibs, have turned a blind eye when Sikh sangat brought it in the public eye.

Ek Niwas is for all practical purposes, a Mandir ( Hindu temple) which promotes so-called unity amongst all faiths. However, the only religions represented in its practices are Hinduism and Sikhism. The institution is registered as a UK charity (Registration# 1056024) since the 10th June 1996. According to the Charity Commission the main objective of Ek Niwas is “to advance religion”.

Satguru Sri Guru Granth Sahib Ji’s Pavitar Saroop is in Prakash in this temple alongside idols of “Baba Balak Nath” and other Hindu deities. The Sikh Rehit Maryada (Sikh Code of Conduct) is being violated and Guru Ji’s Pavitar Saroop is being used as a way of luring ignorant Sikhs. Furthermore, Punjabi song artists with Sikh backgrounds from the UK Bhangra scene are invited to sing Gurbani Shabads mixed with “Bhajans” (hymns) in praise of Balak Nath, and other Hindu gods and goddesses in the presence of Satguru Sri Guru Granth Sahib Ji. The video evidence features Silinder Pardesi, a well-known Punjabi singer, doing Beadbi of Gurbani by singing Shabads followed with slogans in praise for Balak Nath.

Sri Akal Takht Sahib, the Sikh Supreme Authority of the worldwide Sikh community, has already issued a Hukamnama (edict), re-endorsing the Panthic Sikh Rehit Maryada which clearly states (Chapter IV, Article V) that no rituals or practices of any other religion can take place in a Gurdwara or place where Satguru Sri Guru Granth Sahib Ji is present. This includes the condemning the installation of statues and idols. In addition to Pooja and non-Sikh religious practices take place in the presence of Guru Sahib as the Ek Niwas temple worshippers dance, clap and sing songs in praise of Balak Nath and Hindu gods and goddesses in the presence of Satguru Sri Guru Granth Sahib Ji. This is condemned by Gurbani:

Panthic Weekly advises the UK Sikh Sangat to take swift and immediate action in restoring the respect and sanctity of Satguru Sri Guru Granth Sahib Ji and implement the newly released Sandesh (memorandum) from Sri Akal Takht Sahib, which is clearly being violated by Ek Niwas. The Sangat is urged to write to the UK Charity Commission and register a serious complaint about the religious abuse and violations being carried out by the Ek Niwas institution (a UK registered charity), which is hurting the sentiments of the Sikh Community.