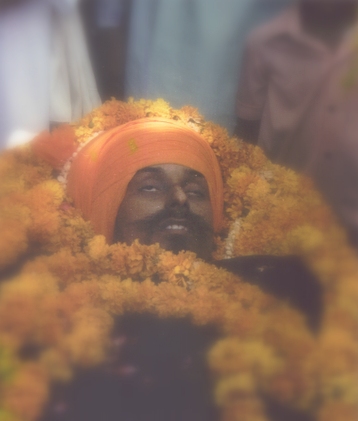 This warrior's confidence increased and he went up to the top most floor of Baba Atal. A sniper fired at Bhai Sahib and the bullet hit him in the forehead. Bhai Sahib fell to the ground, but when a nearby Singh asked "Mehnga Singh!!! How are you??" he replied "Chardi Kalaa!!!"

"True Lord, may my body be a sacrifice unto your feet. Guru, father, may I not show my back in the field of battle, and may I be martyred battling the enemies of the faith. Guru, Father, have mercy on me, may the enemy's bullets not hit my back, may I take them upon my chest. satguru, do not think of my faults, please let me embrace your feet."

This was Bhai Sahib's daily prayer before the Guru. When the time comes for a Sikh to give his head for the Guru, he is overcome with eagerness. He considers it his great fortune to give his head for the Sikh faith. When it comes time to sacrifice for the faith, the Sikh doesn't seek any examples, or justifications, or bribes. No force or fear can turn him away from his goal. Living his life according the Guru's bestowed faith, he fights the enemy and gives his head for the pure faith and truth and is then called a Martyr. Such a warrior always wants that his head should be sacrificed for the cause of the Guru.

On June 1st, 1984, the Indian government directed its evil eye towards the Sikh Places of worship and Sachkhand Sri Darbar Sahib Amritsar. During the attack, Bhai Kulwant Singh Babbar had the honour of being the first martyr to die fighting those who would defile the sanctity of Sri Darbaar Sahib. Just as Bhai Kulwant Singh had the honour of being the first martyr in the Darbar Sahib attack, similarly, Bhai Kulwant Singh Babbar/Nagokay had the honour of being the first martyr of the Dharam Yudh Morcha. On June 9th, 1982, Bhai Nagokay had every one of his limbs broken and after enduring countless tortures, achieved martyrdom and by doing so, gave the shattered Panth unity to fight together. During this time Bhai Amarjeet Singh DaheRoo gave his martyrdom and increased the Panth's fervour to battle.

Bhai Kulwant Singh babbar was born in Yumnanagar Jagadhari in 1957 in the house of Sardar Partap Singh located in Vishkarma Nagar. He completed his early education in Yamunanagar. After passing the ninth grade, he entered the ITI and took a yearlong course in welding and then began to work.

During the Vaisakhi of 1978, unarmed Singhs went to protest the insult of Guru Sahib being done by the Fake Nirankaris, the unarmed Singhs were fired upon and 13 were martyred while countless others were injured.

The spilt blood of the martyrs had a deep effect on Bhai Kulwant Singh and as a result, he began attending Kirtan smagams and would long for the blessing of amrit day and night. By the grace of the Guru during the 1979 AKj holla Mohalla smagam at Anandpur Sahib, he presented himself before the punj pyaaray and was blessed with amrit.

Bhai Sahib would read books on sikh history and would try to mould his life to match those of old singhs. He would always be consulting with other singhs on panthic issues and how they could protect the panth from external threats such as the fake nirankaris.

The Police lodged murder cases on many Singhs and Bhai Sahib's companions fought this case. Bhai Sahib on the other hand refused to fight the case because in this words, "We don't believe in this false government, so why should we go to courts of a government we have no faith in?" Bhai Shaib was acquitted along with the singhs who chose to attend court proceedings.

With a desire to serve the Panth and punish the persecutors of the Singhs, Bhai Kulwant singh left his home and came to Bibi Amarjeet Kaur, wife of Shaheed Bhai Fauja Singh, in Amritsar.

In Amritsar there was a group called the Chaldaa Vaheer, which Bhai Sahib joined and served whole-heartedly. Bhai Sahib wore tattered clothes but refused to accept dasvandh for his own personal use. With the Chaldaa Vaheer Bhai Sahib would do the seva of cleaning Darbaar Sahib early in the morning, the washing of Akaal Thakhat Sahib, kneading of flour in Sri Ramdaas Langar, preparing parshadas and also seva in distributing the langar. Considering Bhai Fauja Singh's wife and mother to be the family of a shaheed, Bhai Kulwant Singh served them with dedication and love. In return Bhai Fauja Singh's mother gave Bhai Kulwant singh the love a mother gives to a son.

After subsequent camps in Sabhravan and Goindvaal, Bhai Shaib became very well acquainted with all the Singh's views and the love between them increased. They began to stay together in the form of a jathebandee. All the singhs had the goal of finding and punishing the killers of Gursikhs and those who would insult Guru Sahib. The first action the Singhs conducted was against an individual who had insulted the saroop of Sri Guru Granth Sahib Ji. And with this, by the grace of the Guru, the work of punishing the enemies of the Panth carried on in secret for the next two years. The Government had no idea who conducted these actions but the people declared that the sevice was being rendered by the Guru Shaheedee Fauj who were supporting the Gursikhs. During this time Bhai Kulwant singh took part in every action, considering it to be service to the Panth. Day and night Bhai Sahib worked to cut the chains of slavery from the neck of the Sikhs.

In 1982, village leader Surjan Singh Nagokay turned in Bhai Kulwant Singh Babbar Nagokay and also gave a full report of othe rest of the Singhs. The government tortured Bhai Kulwant Singh Nagokay to death and then made a false encounter; they also put rewards on the heads of all the other Singhs. Bhai Kulwant Singh aka. Bhai Mehngaa singh also had a reward out for his capture. The government began to hunt the Singhs and as a result, they went undergound. Only a few days had passed in hiding when this beloved of the guru, Bhai Kulwant singh, left to bathe in Sri Ramdas Sarovar and have darshan of Guru Sahib. He exclaimed "If the olden Singhs could cut through the cordon of their enemies, to have ishnan and darshan at Darbaar Sahib, so can I." 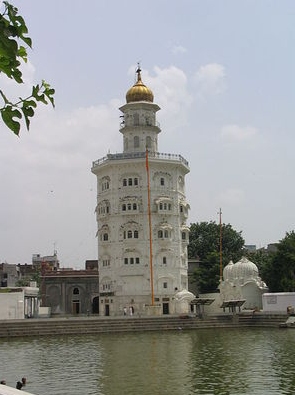 Even during this time in hiding, Bhai Sahib would rise at amritvela, bathe in the sarovar and then attend Asa Dee Var kirtan at Darbaar Sahib. After this, he would attend to the seva of the Singh's langar and also the Jora Ghar. On June 1st 1984 at around 12pm, the CRPF and the BSF, in a government-sponsered scheme to eliminate the Sikhs, opened a rain of fire upon the Singhs at Sri Darbaar sahib, Darshanee Deeorhee, Langar Building and Sri Akaal Takhat Sahib. Bhai Sahib was at Baba Atal sahib and took up a postition there, killing three attacking soldiers. This warrior's confidence increased and he went up to the top most floor of Baba Atal. A sniper fired at Bhai Sahib and the bullet hit him in the forehead. Bhai Sahib fell to the ground, but when a nearby Singh asked "Mehnga Singh!!! How are you??" he replied "Chardi Kala!!!"

The Singhs were informed that Bhai Sahib had been hit and Bhai Manmohan Singh and others were sent to retrieve him. The Gursikhs with great effort in the rain of bullets brought Bhai Kulwant Singh down from the top most floor of Baba Atal and carried him to Guru Nanak Niwas. There were no medical facilities or doctors, but the Singhs cleaned the wound and dressed it. Around this warrior gurbanee began to be recited and only after the completion of Sukhmani Sahib did he go and take his place at the feet of the Guru. On one hand, the Singhs were fighting the enemy and on the other, some Singhs were taking care of the Shaheed's body. Jathedar Sukhdev Singh Babbar asked that Gurbanee continue to be recited.

On the evening of June 1st, the firing ended and a message was sent to the fallen warrior's mother and father. On the afternoon of June 2nd, they arrived from Yamunanagar at Guru Nanak Nivaas, despite the curfew. Mata Jee saw her son and said, "Son, you've fulfilled your promise. When you left home to serve the Panth you asked the Guru for what you have achieved today. By fulfilling your words, and giving your life to the Panth, you have honoured my womb." 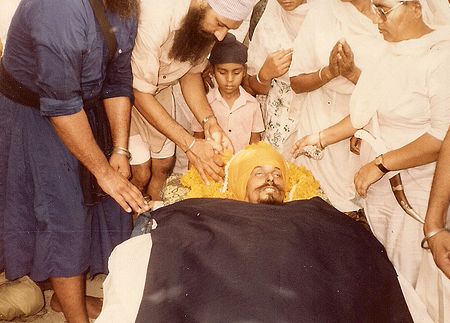 All the Jathebandees in the complex, upon hearing the news of the Shaheedee did a final ardaas for Bhai Kulwant Singh, and upon seeing the shaheed for the final time, heaped praise upon his bravery. Whoever meditates upon the Guru with a pure heart, for certain, gets the reward. May we be a sacrifice unto this first Shaheed, this blessed soul. This was the first shaheed whose body was cremated in the Darbar Sahib complex, despite the protestations of the SGPC president. Bhai Sahib was cremated close to Sri Manjee Sahib.

Jathedar Sukhdev Singh Babbar and other Gursikhs lovingly bathed Bhai Sahib's body and dressed him in the five kakkars, a chola and dumalla . After the final ardas, he was brought near Sri Manjee Sahib and all the sangat in the complex accompanied this procession. Bhai Sujan Singh put a sheet over the body on behalf of Baba Jarnail Singh Bhindranwale. Other jathebandees also put sheets on the body out of respect and covered it with garlands of flowers. At the time of cremation, there was a large gathering of the sangat and every Gursikh felt the pain of Bhai Sahib's departure. Bhai Sahib's father lit the funeral pyre and seeing the rising flames, every Gursikh felt the desire to run to battle and die fighting for the faith.