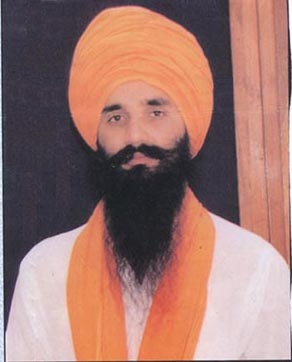 When the Singhs were being hunted down and killed, one of the Sikhs' most bitter enemies, Kazi Noor Mohammed was forced to write in his memoirs,

"Do not call the Sikhs 'dogs'. They are in fact lions: in the battle-field they are courageous like bold lions. How could a warrior who joins the battle roaring like a lion, be compared with a dog? If you wish to be proficient in learning their manner of fighting it is such that one and all praise them for it. O swordsman, if you wish to learn the art of war, learn it from them, as they face the enemy like heroes and also get out of the scene of action safely."

In a repeat of history, the Delhi Police Commissioner, Ved Marwah in his memoirs wrote the following about Bhai Harjinder Singh Jinda and his committment to Khalistan :

"Harcharan Singh (sic) alias Jinda who was convicted and later hanged for the murder of the former Army Chief, General A.S. Vaidya was no ordinary man. He was arrested twice by the Delhi Police during my tenure as Commissioner of Police, Delhi. This self-confessed killer was not just a ruthless killer. He had another side to his personality: he could be charming and humorous even when injured and battling for his life. When I met him after his arrest by the Delhi Police he seemed anything but a psychopath. He had psychological traits which made him and extraordinary person, but these did not make him mentally unsound."

"Jinda was first arrested by the Delhi police in 1985, more by chance than owing to any previous knowledge that he was an active terrorist. A spate of bank robberies had taken place in Delhi and the Delhi Police was under criticism for its inability to stop them. I was daily being taken to task by the Union Home Minister and the media. Till Jinda's arrest there was no evidence about any possible link between these bank robberies and terrorism in Punjab. Jinda fell into the police net on the basis of a low-grade information about the theft of a car. Only on the day after his arrest when during interrogation, Jinda started speaking about Pakistani plans for shootouts at public places and killings of Hindus to create Hindu-Sikh riots, that that the police realized that they had a big catch in their hands. The acting Additional Commissioner of Police Crime, RK Sharma rang me up in my house on a Sunday morning to inform me about his arrest."

"I decided to go to the Crime Branch Interrogation Centre to talk to this very ordinary looking man for over one hour and was fascinated by not only what he told me but the way he narrated his story. He had no fear and no remorse. He rather enjoyed talking about his many escapades in which the police, like in the Bombay films, did not come out very well. Here a young man from Amritsar had actually succeeded in getting the better of the entire Delhi Police force and that was something which gave him tremendous satisfaction. He underplayed his role as a terrorist in the cause of achieving Khalistan, perhaps intentionally but had no hesitation in boasting about his daring bank robberies in broad daylight in the heart of Delhi. He insisted on calling Delhi 'Rajdhani' and obviously derived immense satisfaction from taking on the police in Delhi. Even at that stage though we did not know much about his terrorist antecedents, he talked in terms of 'them' and 'us'. It struck me even then that he was more forthcoming and almost friendly with me, because here he was talking to a head of the Delhi Police on an equal footing. He had no hesitation in telling me about his unhappy childhood and his petty crimes in Amritsar."

"He was later transferred to Gujarat from where he escaped while being escorted from the jail to the trail court. After his escape he started committing even more daring acts of terrorism. He became a feared terrorist and was well-known both in Delhi and Punjab. We learnt about his involvement in the killing of Lalit Makan the Congress MP and Arjun Dass, a close Sanjay Gandhi associate."

"He was arrested for the second time by the Delhi Police in August 1987, in an encounter in the Civil Lines area in which he was seriously injured. He was taken to the Civil Lines Police Station before the arrival of an ambulance. This time there was no doubt that the Delhi Police had scored a major success. His capture was the result of close cooperation between the Delhi Police and the Intelligence Bureau. I learnt about the encounter on my wireless set and rushed to the Police Station within a few minutes. Jinda was being moved into the ambulance on a stretcher when he saw me. He immediately recognized me and greeted me with a big smile. He must have been in terrible agony, but that did not stop him from joking. 'Mubaraq ho. Ab to app ko bahut bari taraqui milegi. Delhi Police ne mujhe pakar liya hai' (Congratulations. Now you will get a promotion-Delhi Police has been able to arrest me). Here was a man almost on his deathbed and yet he had the audacity to poke fun and laugh. I could see that he was enjoying the thought of not only making the supreme sacrifice for the cause in which he believed, but of being able to be one up on the Commissioner of the Delhi Police."

"He was take to the Army Hospital in the cantonment, because of security considerations, and miraculously, he responded to the treatment after a successful operation. I went to see him along with DCP Crime, this time not to interrogate him but to see someone who had earned my respect. I must confess that then my feelings for this man were not that of professional police officer for an outlaw but were mixed with some warmth and admiration.

It is important at this point to say something about our system. Here was a known killer of the former Army Chief being treated by the army doctors, who performed nothing short of a miracle in saving his life. When I entered his room he was lying on the bed as the lower portion of his body was completely paralysed. The doctors could not say at that time whether he would ever be able to use his legs again. On seeing me he again greeted warmly and apologized for not being able to get up. He thanked me for coming to see him. He behaved as if he was talking to an old friend. He was in a talkative mood and this time told me all about the terrorist movement in Punjab and their ultimate goal of Khalistan with Pakistani help. He bragged about his escape from Ahmedabad and had absolutely no fear of death. He was certain that his end was not too far off and tauntingly told me that this time the Delhi Police would not make the mistake of handing him over to the Gujarat Police. When I told him that we would not hand him over to the Punjab Police as he suspected but to the Maharashtra Police to face a trial, he could not believe it. We later did hand him over to the Maharashtra Police. He was tried in the Pune Jail for a protracted trial and later hanged."

"Terrorism gave Jinda a cause to live for. There was no question of diverting him from the path which he had chosen for himself. He justified the most heinous of his crimes in the name of the 'Panth'. It is the combination of political factors and such traits in their personality that attracts people like Jinda to the terrorist movement. The sole aim of his life became commission of terrorist acts, which he firmly believed would in the end succeed in achieving their goal of 'Khalistan'. There is no scope for any negotiations with such men. But such personality traits are seen only among the hard-core terrorists. There are of course other types of person among terrorist their supporter and sympathisers who are more amenable to negotiations and compromise."