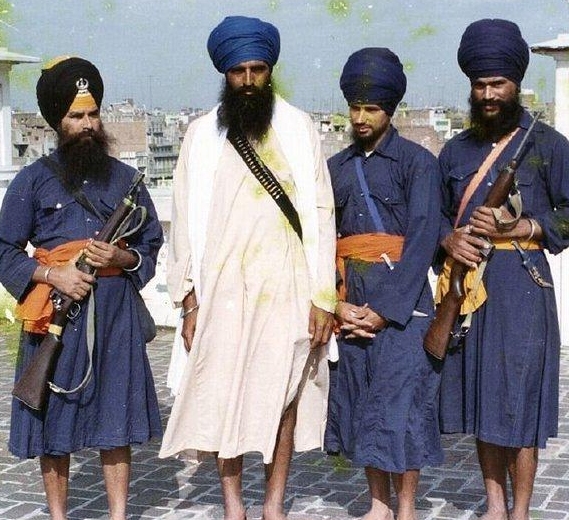 It was Sunday and I had arrived at Amritsar from Bathinda early in the morning. At the Guru Ram Das Langar, in the room built underneath the stairs, I ran into Bhai Amreek Singh. He asked how I was and said to me "Bhaa-jee, a lot of Sangat comes to meet Sant jee and there's not enough time. Sometimes he doesn't care about the foreign Sikhs who've especially come to meet him and he embraces the Simpletons and wastes so much time with them. Help us out. Bring Sant jee's attention to this matter, because despite all my effort, he doesn't pay any attention to this.

According to my own nature, I told Sant jee exactly what Bhai Amreek Singh had said to me. Right away Sant jee became upset and called Bhai Amreek Singh and Bhai Rachhpal Singh near him. He said "I need my "simpleton" friends much more than your friends with their dollars and pounds. Be Warned! No one should say anything unbecoming about these poor Sikhs

The Giving of "Medicine"

It was noontime. I was sitting alone with Sant jee. A very simple looking, middle aged Sikh couple from the villages came in. Their poverty was quite apparent. They gave their Fateh and put a cardboard box in front of Sant jee. The Sant asked "what is this?" They replied "it's medicine". Sant jee then asked "Is it for me or someone else?" The poor Sikh replied "I don't know about that. If you want to keep it, you can. If you want me to give it to someone else, I'll take it there."

The Sant opened the lid of the box and emptied it into his lap. His lap filled with revolver and sten-gun bullets. Sant jee very lovingly thanked the villager couple and asked his sevaadaars to arrange for refreshments for them. Throughout this entire episode, Sant jee kept looking towards me and smiling. (note: in Punjabi "golee" means both bullet and medicine tablet)

Not an Ordinary 'Sant'

It was noon time. In Sant jee's room in Guru Nanak Nivaas, we (I, Bhai Amreek Singh and Bhai Racchpal Singh) were sitting on an extra manja beside Sant jee's bed. The Sangat was coming in to say Fateh one by one. In those that were coming, most were women and a bit of a crowd had formed. Without warning, Sant jee jumped onto his bed and stood up and was about to hit a very large woman with his teer (arrow). I, in a bit of panic, grabbed his hand and asked "What has happened?" I was of course a bit shocked.

He spoke in anger and said "You know what she was saying? She was asking for a son!"

There was no need to say much more. We told the Singh at the door to stop the flow of sangat for a while.

But this is clear, we usually hear about traditional 'Sants' giving children and women come to them to ask for boys. This is a pity for the entire society and this was and continues to be a very big problem in the Sikh world. Sant Bhindranvale was not only away from such practices, he was strongly against them.

The days of Blue Star were approaching and people with various views often met Sant jee on the roof of the Langar Building. While I was standing there, two retired Sikh Brigadiers came and said "We wish to speak with you privately". Sant jee said "There is no shyness here, please speak" The Brigadiers said "We have seen and evaluated all the outposts and defences around Harmandar Sahib and we feel that there is a weakness in the fact that the Singhs don't have binoculars. There is a need for at least two binoculars (per outpost)" Sant jee said to Bhai Amreek Singh, who was standing nearby "Come and listen to these people". The Brigadier then said "To understand your full power, if you could tell us how many weapons you have exactly, it would be good"
Putting his hands on the mid-sized Brigadier's shoulders, Sant jee said "General Sahib, You've commanded very large armies. I'm a stupid Jat. What do I know about these things? You should read GurbaaNee. Doing that gives power."

It was a Sunday in May 1984. I arrived at Harmandar Sahib at 9 AM, and noticed an odd sadness everywhere. I came to the Parkarma and saw about 25 young men in yellow dastaars with kamarkasas marching. In the room underneath the stairs of Guru Ram Das langar, Sant jee's companions used to plan out strategy and have meetings. All outsiders used to enquire here first. I arrived there and asked Bhai Amreek Singh about the 25 men marching in the Parkarma. He answered "These Singhs are from Hazoor Sahib. They told the Kar Seva Babas that until the existing gurdvaras are secured and protected, there is no need to build new gurdvaras." Today I think that these young men had arrived from all over after receiving training, all according to Sant jee's strategy. Their march was to give warning to the government.

Bhai Armeek Singh said that in a little while the Jatha (Jatha Bhindran) would be having an important meeting on the roof of Sree Akaal Takhat Sahib. "Sant jee has asked that you (Dalbeer Singh) should certainly come to this meeting." I said that "I am neither a member of the Jatha, nor even amritdhaaree, how can I go to this meeting?" Bhai Sahib asked Sant jee on the intercom and said Sant jee wanted to speak to me in person. After answering my Fateh, he forcefully said "Gurmukha, you must come to the meeting." Answering my concerns, he said "I'm the head of the Jatha, and it is my decision to make about who can attend the meeting and who cannot".

At around 10 AM, I, Bhai Amreek Singh and others went to the highest roof of Sree Akaal Takhat Sahib where the meeting was to take place. Because there were too many Singhs and not enough room, they had made an "L" shape around the dome. Tyaar-bar-tyaar Singhs with yellow dastaars, yellow kamarkassas and knee length cholas and kachheras, with their weapons facing sky-ward were giving an amazing sight. This sight can be seen in paintings of puraatan times. I took a place in the corner facing Harmandar Sahib.

Sant jee came and stood in a corner. He could see all the Singhs form this spot. In his pure Punjabi, Sant jee said "Singho, I have called your meeting because the situation is very serious. A Jatha has come from Sree Hazoor Sahib and you should arrange weapons for them. Whoever amongst you have two weapons, should return one. You may choose which weapon you want to keep, because later on, there will be no changes. After this, Sant jee's assistant Bhai Rachhpal Singh took his small diary and began to take an account of the 100 Singhs' weapons. This took about half an hour.

Then Sant jee resumed his speech. He said "Singho, the government will according to its strategy surrounded us with 100 000 soldiers. It is possible that jets and helicopters could be used and parachute soldiers could be dropped onto the parkarma. But until then, you will not fire any weapons, until the soldiers fire. Let the government fire first. Until the soldiers jump from the planes, do not fire. But when they do, not one parachutist should land alive. Don't waste ammunition and you should take one life with each bullet at least. If the enemy comes very close, distribute the Ladoos (hand grenades). This will be a very terrifying incident but taking the support of Guru Ram Das jee's feet, we will pass this test. "

Sant jee said some other things and then finished his speech. He stopped for a while and then according to his habit, he took his lower lip into the left side of his mouth and began to think of something. He would do this when he was double-minded about something. After a minute or two of silence he spoke in very drawn out voice "Singho, I have to speak to you about another issue as well." He looked towards me and said "Bhaeeyaa, should I do it?" I understood what was in his heart and said he should do it.

In a very serious mood, Sant jee said "Singho, that which is going to happen will be very shocking and we should go according to the will of Akaal Purakh. I can't say that at that time what the status on my life will be. If at that time I have breaths, I will tell the name of the next head of the Jatha, if this is not what pleases Akaal Purakh, then the next head should be chosen by consensus. My body should be cremated at Gurduara Gurdarshan Parkaash Mehta, on the street in front of the gate. Taking his right elbow onto his left palm, he said "Put a Nishaan Saahib of about this size there. Don't make any memorial. I want my cremation on the road so that the Sangat can continue to pass over my pyre and I'll get the touch of their feet."
Everyone's eyes were teary after hearing Sant jee's words.

In his clear voice he said, "Don't lose heart. Remain steadfast. The time has come when the Dharam cannot be protected without giving our heads."

After this, all the Singhs quietly went to their own resting spots. When walking, Sant jee put his hand on my shoulder and said "Brother, keep your duty of friendship to the end [yaaree nibhaaee(n)]"

After this, Blue Star happened and it remained a very big weight on my mind that who should I talk to about all this? After a lot of thought I shared this with the late Sd. Jagjeet Singh, the respected scholar of GurbaaNee and Sikh principles and the author of the book "Sikh Revolution". I asked why the Sant had called me into that meeting. He said very softly to me, "Dalbeer Singh, the reason is quite simple. The Sant had given a spoken final testament and without writing it down, he made you a witness to it."