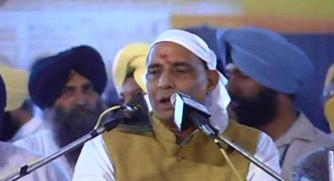 Tarn Taran Sahib, Panjab (KP) - Although the historic event of the 400th anniversary of Guru Arjan Dev Ji's unparallel Martyrdom (Shahidi Diwas) has passed, but the criticism continues in Panthic circles on the blatant misuse of the sacred and religious stage on that occasion by shameless Akali politicians, particularly belonging to the Badal Akali Dal. The raised dais for the sacred Parkash of Guru Granth Sahib Ji, kept higher than the area where the Sangat sits, is to be used only for Kirtan, Katha and Panthic parchar.

That sacred dais has been turned into a political showground and is now being defiled by the corrupt politicians and patits belonging to SAD and the Hindu Nationalist Bhartya Janata Party (BJP). Such beadbi and misuse of the sacred stage was broadcast internationaly during the commemoration of the 400th Shatabdi.

Prakash Badal (SAD) followed his commonplace routine of deceit and disrespect for Guru Sahib at the recent Shaheedi Shatabdi held at Sri Tarn Taran Sahib before a sangat numbering in the thousands in the presence of Guru Granth Sahib Ji. The program was supposed to be held in commemoration of the 400th Shaheedi Purab of Guru Arjan Dev Sahib Ji but Badal instead used the event as a venue to honor Hindu nationalist parties which are involved in the ongoing genocide of religious minorities in India. 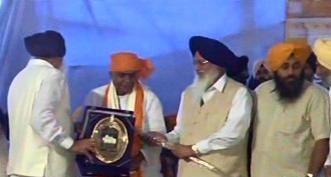 Badal gave a siropa to Rajnath, president of the right wing Hindu nationalist BJP, which is the political party of the the right wing Rashtriya Swayamsevak Sangh (RSS), after allowing him to give a speech before the Sangat. This blatant disrespect for the sentiments of the Sikh community from SAD has come under intense scrutiny from numerous Panthic organizations worldwide.

Indeed, the Hindutva agenda was vivid in Badal’s speech which followed right after Rajnath Sing. In response to Sardar Simranjit Singh Mann’s empowering calls for self-determination earlier in the day, Badal said, “Hindustan is our country; we must give our lives for it.” He also pointed out that this event was strictly religious and that this was not the venue for politics alluding to the statements made by Mann. Following this, Badal expressed thanks to Rajnath Sing, and said that it was unfortunate that Congress Party leaders did not come for the event. 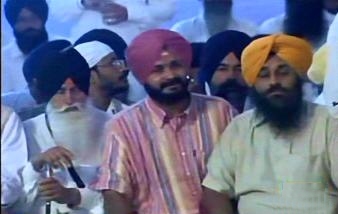 Sardar Mann made calls for the liberation of the Sikh Homeland and told the sangat that it was imperative that the Khalsa Panth remember the Sikh genocide that took place and continues on to this day. Furthermore he stressed how the Sikhs of today must be true to Guru Sahib and stand up for justice in the same way Guru Sahib did four centuries ago. He pointed out how the Akalis were using Guru Sahib’s Shaheedi Purab as a platform to honor major human rights violators and Hindu terrorist supporters.

Sardar Mann further pointed out the indiscriminate detention and harassment of innocent individuals that followed the apprehension of Babbar Khalsa International activit Bhai Jagtar Singh Hawara. He questioned how Sikhs could feel safe in a country where they treated less than common criminals.