If Vedanti can't take action against Chela Ram, he should resign: Shabaaz Khalsa 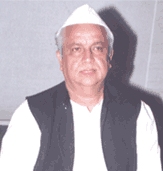 Amritsar Sahib (KP) – The panthic organization, Shahbaaz Khalsa, has asked Giani Joginder Singh Vedanti to tender his resignation if he cannot be impartial in his duties as a Jathedar. Shahbaaz Khalsa sevadars requested that if the Jathedar was having difficulty making decisions because of political influence from special interests, he should give up his much-respected Panthic position and return home.

Speaking at a press conference Bhai Sukhmander Singh, and Bhai Nirmaljeet Singh and others collectively expressed anguish and stated that they had brought to the attention of Jathedar Vedanti the ongoing beadbi [gross disrespect]of Guru Granth Sahib Ji being committed by Chela Ram.

They had supplied the Jathedar all the necessary evidence and details one year earlier. In addition, they had recently reminded Vedanti that the beadbi was still being committed by Chela Ram, but there has been no action taken by Vedanti while the disrespect of Guru Granth Sahib Ji continues unabated.

They stated that not only has their petition highlighting the misdeeds of Chela Ram been ignored by Joginder Singh Vedanti, but that on July 30th in an unprecedented act, two responsible workers of the Shiromani Committee, President Avtar Singh Makkar and Secretary Harbeant Singh were honored by the very same Chela Ram.

Shahbaaz Khalsa has asked Akal Takhat Sahib to relieve these two individuals of their duties without further delay and give them the strictest punishments. The three representatives of Shahbaaz Khalsa detailed that along with the prakash of Sri Guru Granth Sahib Ji, statues of Hindu gods were also being displayed by Chela Ram.

Another shocking revelation they made was that Chela Ram and his devotees, following in the footsteps of Bhaniraywala, have another ‘granth’ from which they take a Hukamnama which is placed alongside Guru Granth Sahib Ji. This granth is said to be written by the ancestors of Chela Ram in praise of themselves.

They said that this is an enormous attack on Sikhi by Chela Ram. Meanwhile, he has also opened three deras in Delhi, Solan, and Mumbai. The Delhi dera is being run by Chela Ram himself, while his Solan dera and Mumbai deras are run by his daughter Radhika and his son respectively.

Along with damaging Sikhi, they are also doing the beadbi of Sri Guru Granth Sahib Ji. Shabaaz Khalsa representatives said that they have also brought several other similar cases to the attention of Vedanti but they have yet to receive a satisfactory response.