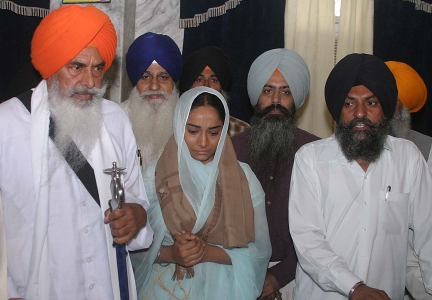 Jalandhar, Punjab - Much to the embarrassment of the ruling Congress, the Sikh leaders conferred the honorific of ‘great martyr” on Beant Singh, an assassin of Congress leader Indira Gandhi, at a function organized by the Dal Khalsa, and hailed his act to mark the 22nd year of his “martyrdom” at Jalandhar on Oct 31.

Significantly, the Jathedar of Takht Damdama Sahib, Balwant Singh Nandgarh, accorded the status of “martyr” to Beant Singh and observed that his sacrifice was in accordance with the greatest Sikh traditions.

Jathedar Nandgarh honoured Bibi Amrit Kaur daughter of Shaheed Beant Singh by presenting her with a siropa (robe of honour) and a shawl. Mr Amrik Singh, the father of Avtar Singh Gola who was shot dead by Cat- turned-police inspector Gumit Singh Pinki 5 years ago, was also honored by the organizers.

Jathedar Nandgarh equated the sacrifice of Beant Singh with those of martyrs who had restored the honor of the Sikhs throughout history. He said Beant Singh embraced martyrdom to avenge the desecration of Sikh religious places. He said had Beant Singh not punished Indira Gandhi, none would have believed in the heroic deeds of Sikhs of 18th and 19th century.

A large number of political activists representing different factions and groups participated in the convention held to pay tribute to Beant Singh, who was killed by security guards of the slain PM minutes after he assassinated Mrs Gandhi at her residence on this day 22 years ago.

The resolution was adopted stating that Beant Singh has attained the status of a ‘martyr’ as per Sikh tradition and according to the Sikh concept of ‘martyrdom’. His name will always shine in the galaxy of martyrs that are remembered by all Sikhs in their daily prayer (Ardas).

Eulogizing the sacrifice of Beant Singh, the party president Satnam Singh of Paonta sahib said it was not in the Sikh temperament to give in to repression. He said Mrs Gandhi committed a sin by ordering the army to storm Darbar Sahib in June 1984.

While speaking on the occasion, the former president of the organization H S Dhami said his party (Dal Khalsa) would always place the community’s interest first, “Sikh interests and principles are supreme. There cannot be any compromise on that. We will try to protect the national interest of Sikhs to the utmost.” 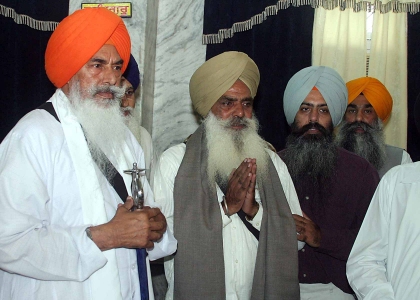 Expressing solidarity with family members of deceased Avtar Singh, SGPC member Karnail Singh Panjoli said Pinki remained the darling of the police machinery and enjoyed patronage of higher-ups despite his criminal background. He referred to the case of ADGP Thind which has been suspended by the HP government after he was arrested in a case and explained that despite Pinki’s conviction by the Haryana court in a murder case, the police department and the Punjab government have deliberately not dismissed him from his job. The saddest part is that he is still a police officer and that the claims of the police chief that they had not received any court order hold no water.

General Secretary Kanwar Pal Singh said a glorious future awaited the community and that all that was required was to make the Sikhs realize that they were a sovereign people which had once established sovereign rule in history. They must raise their self esteem and take pride in their culture, heritage and language.

Jaspal Singh Dhillon VP called upon Punjabis to face the demographic threat posed by the influx of migrants unitedly. If we fail to take up the challenge we would be reduced to a hapless minority in our own native homeland.

Referring to Kathunangal clash in which henchmen of SAD (Badal) had manhandled Simranjit Singh Mann and his supporters, Khalsa Panchayat chairman Rajinder Singh said “Badal and his coterie had initiated an internecine feud within the community. Taking a dig at the present leadership, he said it was devoid of ideology and ideas. Giving a clarion call to Sikhs to participate in the ongoing struggle to cleanse the Sikh institutions of all wrongdoings, he said, “We must reject those who had betrayed the Sikh Panth for their petty interests”.