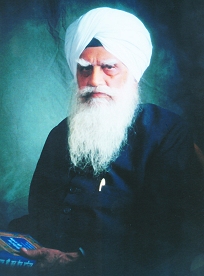 Giani Gurdit Singh was a multi-faceted personality with a unique distinction of being a scholarly author, well-known journalist, editor and distinguished researcher.

Giani Gurdit Singh was awarded Punjabi Sahit Shiromani Puraskar in 2006 by the Punjab government. Presented by the Punjab Languages Department, the award carried a cash component of Rs 2.5 lakh. While even international bodies like UNESCO had recognized the worth of “Mera Pind”, which awarded to the author in 1967; recognition from the state government was considered long overdue in Punjabi literary circles.

Born on February 24, 1923, in Mithewal village, Giani Gurdit Singh had lived a versatile life of an academic, politician and religious scholar. He was the editor of a Punjabi newspaper, “Parkash”, which he brought out from 1947 to 1978, and also “Singh Sabha Patrika”, a monthly magazine devoted to Sikh history and divinity from 1973 to 1988.

Considered a virtual classic of Punjabi literature, Giani Gurdit’s “Mera Pind” was first published in 1961; it is now in its seventh edition. It is a comprehensive study of the entire spectrum of life in a Punjab village, which has since long been part of syllabus in schools, colleges and at university level. “Mera Pind” has sustained readership over the past four decades.

Apart from his prose, Giani Gurdit had also received recognition for his research work on Guru Granth Sahib and other Sikh scriptures. In 1991, the SGPC recognized his contribution with the honorific of Gurmat Acharya. Giani Gurdit Singh’s son Roopinder Singh is presently working with a Chandigarh based English daily.