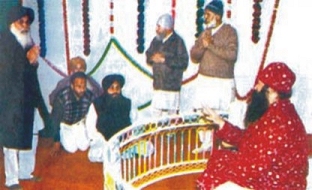 Chandigarh, Punjab (KP) - The recently held State Assembly Elections in Punjab was a fine reflection of the mass scale moral corruption that has overtaken the state. Indeed, it doesn’t take much to win the modern day Punjabi election; all you need is anti-Sikh cults, a few hundred liquor shops and you’ve got yourself an election.

A good case in point is the self proclaimed guru Gurmeet Ram Rahim of the Sacha Sauda cult. Nakli Akali Parkash Badal did his best to win over the cult leader, but in the end the fake saadh ended up casting his support for the Congress candidates.

The dera's decision to support the Congress party has raised many questions to which the dera followers have no answers. The decision to offer support for Congress candidates in Punjab might have been a political stunt by the dera leader Gurmeet Ram Rahim but many of his followers are now expressing a feeling of revulsion as voting for some congress candidates entails violating the cult's ‘principals’. 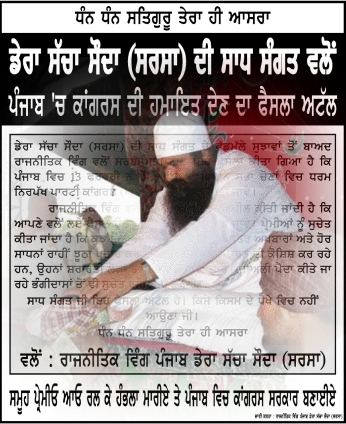 A Political Ad in a Punjab newspaper by Sacha-Sauda cult

Normally the Sacha Sauda cult, including other extremist groups such as the Radha Swamis and Nirankaris, boast being anti-alcoholic ‘religious institutions’, but this bogus claim was shattered the day these deras pledged support in favor of the Congress candidates; many who indulge in and own wine and liquor businesses. Not only that, some chosen congress candidates have been publicly cited distributing liquor to win votes of the Punjabi people. Although the list of such candidates is long, some of the prominently known Congress leaders that own liquor businesses include: Balbir Sidhu (Mohali), Amrik Dhillon (Samrala), Harmohinder Sinh (Raikot), Sukhbinder Sinh Sarkaria (Raja Sansi), Kewal Dhillon (Barnala), Partap Bajwa (Kahnuwal) and Rana Gurjeet Sinh (Jallandhar).

Indeed free liquor and drug distribution is a disturbing yet common facet of the modern Punjabi election, and the candidates from both parties use alcohol distribution as a key vote winner.

Balbir Sidhu, Congress candidate from Mohali, is notoriously known for running liquor businesses in the name of his brother Amarjeet Sidhu (Jeeti). Their business consists of over 100 wine shops, out of which, at least 18 are based in Mohali. Amrik Dhillon from Samrala was at one time known as the 'Liquor King' as his liquor business in Punjab was comparable to none other. His business extends to other states of India as well. Harmohinder Sinh, Congress candidate from Raikot, also holds a dubious past background. Although he was raised in an average Punjabi household, his name started to be spotlighted in Punjab's elections, after becoming heir of Karnail Sinh Viceroy of Raikot. Not surprisingly he too also holds a huge liquor business in Punjab.

Sukhbinder Sarkaria, owner of Prince Sarkaria Liquor Business, has a record of losing in elections but despite this fact, he gets the polling ticket of the Congress party every time. Kewal Dhillon of Barnala is owner of a liquor factory and also deals with import/export liquor business. Partap Bajwa is also eminently known for his state wide liquor trade business. Rana Gurjeet Sinh from Jallandhar is the owner of a liquor factory named the Rana Distilleries.

What’s the common denominator among all of these candidates? You guessed right, they all own, sell and drink liquor. Liquor shops can be found on every street corner in Punjab today, even in the holy Sikh city of Amritsar. Add up the equation, and you get the modern day corrupt Punjab assembly elections. All you need do is buy off your local dera, hand out some liquor and you’ve got yourself an election. This is the sad state of the political leadership in Punjab. Despite rising inflation, where the average citizen has trouble affording basic amenities; alcohol is cheap and politicians from both parties are cashing in with their pocketbooks and with the votes. Indeed the candidates have made many promises to the people from Punjab over the past months leading up to the elections, but it seems the only promise they are set on keeping is ensuring that Punjab is filled with a sixth river of wine and a sea of fake human gurus.