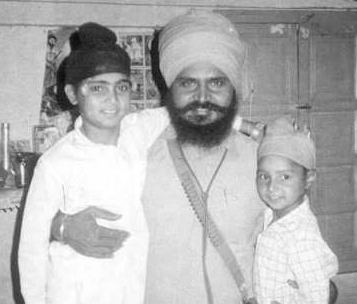 "We will spill our last drop of blood and to the last man we will fight for Khalistan."
The immortal words of Shaheed Baba Gurbachan Singh Manochahal General of Bhindranwala Tiger Force of Khalistan (B.T.F.K)

The history of the Sikh nation is filled with sacrifices and whenever the rulers of India or any invader has tried to finish the Sikhs by oppression the Khalsa Panth has retaliated by bringing the oppressor to justice. In recent times the Indian authorities have been trying to eliminate not only the Sikh people but also those belonging to other minorities in India by persecution and genocide.

Baba Gurbachan Singh was the last major Sikh Resistance leader to fall. The Indian Government had put a RS 25 lakh reward on his head and was searching the entire Tarn Taran area for him, conducting 45 raids at one time to trap him. Baba jee escaped each time and continued to be a painful thorn in India’s side. When all the other Singhs had been martyred and the entire Indian Security Force was on his trail, he refused the order to go and hide in Pakistan and spit on the offer to surrender. He simply could not be caught. Even in the end, he was martyred not by police bullets, but by the betrayal of those he considered his own.

Baba jee was a Sant Sipahi and a farsighted General. In honour of Baba jee’s 12th Shahidi anniversary falling on February 28, I will be posting the story of this Sikh hero as well as stories about his time in the struggle.

Baba Gurbachan Singh Manochahal was born on June 6, 1954 at village Manochahal in Amritsar district. His parents were Bapoo Atma Singh and Mata Gurmej Kaur. His parents were simple farmers but their family had a heritage of struggle against injustice. Bapoo Atma Singh’s uncle had become shaheed in the Jaito Morcha, marching against the British Raj.

Baba Gurbachan Singh was from childhood a very strong and muscular boy. He enjoyed wrestling and other sports. The family moved from village Manochahal to Nausherae Panooaa(n) when Baba jee was still young because his mother’s brothers had left for Singapore and left behind a large farm that had to be maintained.

Baba jee was in the tenth grade when once he saw a boy inappropriately teasing and harassing a group of girls. Baba jee grabbed the troublemaker and beat him badly. The teacher found out and in front of the entire class asked the young Gurbachan Singh to explain why he had beaten the other boy. Baba jee explained, “Sir, he was harassing the bibis and after all, all women should be like our sisters. So, I couldn’t help myself and I did what I had to.”

The entire class began to laugh at Gurbachan Singh’s use of the word “bibis” for the schoolgirls. The teacher laughed and said, “I see! These girls are “bibis” and you would be the “Baba jee. All students! From now on, everyone will call Gurbachan Singh, Baba jee!”

After that day, the nickname “Baba” stuck and everyone began to call him Baba Gurbachan Singh. In the entire area, people began to know him as “Baba jee”.

Days in the Army

Baba Gurbachan Singh completed his education and at his father’s wishes, decided to join the army. Baba jee was 6”1 and over 200 pounds. The army happily enlisted him as an “A level” recruit.

Even in the army, the name “Baba” Gurbachan Singh stuck. He was known for doing Paath and being a devoted Sikh, even though he was not yet amritdhari. Every day he dedicatedly did his nitnem. One day, as Baba jee was doing nitnem, he fell into deep samadhi (meditation). The time for the daily military parade came and went and Baba jee had no awareness of it. The officer in charge of the parade demanded to know where Baba Gurbachan Singh was. The other soldier tried to explain that he was meditating but the Hindu Officer had a bias against Sikhs and refused to understand.

The officer went to Baba jee and shook him into awareness. Baba jee apologized for missing the parade and explained he was reciting Gurbani. The officer responded by making fun of the Sikh faith and insulting the Gurus. Baba jee’s anger couldn’t be controlled and he tackled the officer. His fists flew and the officer shrieked for someone to help him. The other Sikh soldiers watching did nothing as they knew how much the officer hated Sikhs. The beating continued for some time when finally other officers came and stopped Baba jee. Baba jee had broken the Hindu officer’s arm and his nose.

Baba Gurbachan Singh was arrested and court marshaled. After a year of prison, Baba jee left the army and returned home with a desire to dedicate his life to Sikhi.

Although Baba Gurbachan Singh did nitnem and had a love for Sikhi, he was still not amritdhari. Baba jee always attended programs by various Sants and one day he found out that Sant Kartar Singh Bhindranvale would be coming to his village for a program. Baba jee was very moved by the katha and wanted to speak with Sant Kartar Singh. Sant ji encouraged him to become amritdhari and so Baba jee did so within just a few days.

After receiving the gift of amrit, Baba Gurbachan Singh decided to travel with Jatha Bhindra(n). He became very close to Sant Kartar Singh and also learned Gurbani Santhiya and Katha. Baba jee had memorized many banis and had a very long daily nitnem which he began very early at amrit vela.

After the passing of Sant Kartar Singh, Sant Jarnail Singh became the next jathedar of the Jatha and Baba jee was also very close to him.

In the 1970s, the Indian government sponsored Nirankari cult began to come to the forefront and publicly derided the Sikh faith and insulted the Sikh Gurus. The cult chief, Gurbachana was known to have said insulting thinks like “Guru Gobind Singh made the punj pyaray, I’ll make the sat sitaray”. He also insulted Guru Granth Sahib.

On April 13, 1978, the Nirankaris had a march through Amritsar in which slogans against the Sikh religion were shouted. Singhs from the Akhand Kirtani Jatha and Jatha Bhindra(n) marched peacefully against the Nirankaris but were brutally attacked. 13 Singhs were martyred and many more were injured. Baba Gurbachan Singh had also taken part in this march and was shot in the arm.

When the Nirankaris continued with their insulting parchaar and were protected by the Indian Government, the Singhs began to punish the Nirankaris themselves and Baba Gurbachan Singh also wanted to join this movement. When he asked Sant Jarnail Singh for permission, Sant Ji kept saying that Guru Sahib was to take a very big seva from him yet. Sant Jarnail Singh asked Baba Gurbachan Singh to return to his village of Naushera Panooaa(n) and direct the building of Gurdwara Baba Dhanna Singh Kaviraj there. Baba jee accepted this hukam and returned to his village, but visited Sant Ji regularly even after.

When in 1982, Sant Jarnail Singh Bhindranvale had gone to Bombay; the Indian Government thought it was the perfect time to capture him. The police surrounded the area and when Sant jee received word of this he thought of a clever ruse. Baba Gurbachan Singh, who had been traveling with the Jatha, was about the same height as Sant jee and wore the same style of clothes. He covered his face and lay down in Sant jee’s bed so those watching would be fooled. Until Sant jee had made his escape, Baba Gurbachan Singh continued to lie in bed and when he finally got up, the government agents were shocked and disappointed that their opportunity to arrest Sant jee had passed.

Later when Baba Gurbachan Singh would volunteer for different missions to punish the enemies of the Panth like Bhajan Lal and various police officers, Sant Jarnail Singh would always say, “These are all small jobs for you. I am going to take a very big seva from you eventually…”

The Gurdwara in Naushera Panooa(n) where Baba jee did seva was regularly visited by Singhs serving in the Movement.

As the days of the attack seemed to be drawing nearer; Sant Jarnail Singh Bhindranvale sent a message to Baba Gurbachan Singh for him to come meet him at Sree Darbar Sahib. Baba Gurbachan Singh was waiting for the opportunity. Sant jee met Baba jee very warmly and told him that an attack on Sree Darbar Sahib was imminent. Baba jee requested that finally this time his seva should be accepted and he would join Singhs in defending the Complex and become Shaheed. But Sant jee knew that this Singh would one day be a General that would shake all of India. Sant jee said that not all the Singhs should be Shaheed in the attack. That after the attack the struggle must continue and it would no longer be a struggle for greater water rights or concessions from the Center, it would only be for independence. For Khalsa Raj. Baba Jee vowed to give his all in the fight for the Panth and for sovereignty. Sant Jarnail Singh gave Baba Gurbachan Singh a siropa and lovingly ordered him to return to his village and not return until summoned. Baba jee knew this would be their final meeting.

The attack took place and the Singhs defending Darbar Sahib became Shaheed after wreaking havoc on the Indian Army. Baba Gurbachan Singh knew that the “big seva” Sant jee had spoken of was now at hand.