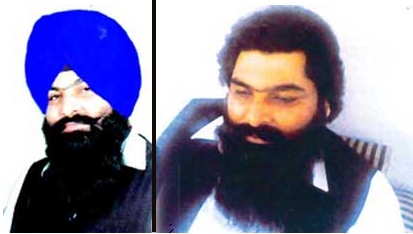 Mohan Lala Banga Before and After the Elections : Hindu or Sikh ?

Banga, Punjab (KP) – With a flowing black beard, and a navy blue dastar, he looked like any other young Akali candidate during the recent 2007 Punjab Vidhan Sabha elections - yet something was different about this man.

For one thing, his name, Chaudri Mohan Lal Banga, did not match his appearance. The voters of Punjab did not care, they voted for him anyways, and elected him into Punjab’s Vidhan Sabha during the recent elections.

To the surprise of many, as soon as he secured his political positions, this Shiromani Akali Dal (Badal) candidate abandoned his dastar, and appeared at the Vidhan Sabha oath ceremony with his hair open, a taboo for Sikhs. During the election, he was seen with a turban and a flowing beard while soliciting votes as a Sikh. The votes are in and the dastar is out.

Panthic organizations in Punjab and abroad are appalled at the fact that how could the public even elect a chameleon like Mohan Lal under the banner of Akali Dal. According to Panthic sources, it is being suggested that Mohal Lal indulged in these offensive actions on command of the anti-Panthic Ashutosh of the Noormehal Cult.

The Sikh organizations have asked the Akal Takht Sahib Jathedar to take stern action against Mohan Lal and Party Chief Parkash Badal for misusing the Sikh appearance for political gains and for hurting the Sikh community’s sentiments. They have for a long time contested that Shiromani Akali Dal (Badal) is no longer a Sikh political party, which has opened itself to the anti-Sikh forces.

The Shiromani Akali Dal at one time represented the Sikh identity, along with political and religious aspirations of the Sikh Nation. Under the guise of secularism, the Badal Dal seems to have sold its identity and self-respect in desperation for votes.

Panthic organizations have also asked Akal Takht Sahib Jathedar to have Parkash Badal clarify his stance on anti-Sikh cults. In past, while Parkash Badal has shown open support for the Naamdhari and the Noormehal Cults which supported his party well in the previous elections, as well as the pro-congress Sacha Sauda dera.

While responding to a Sikh delegation which approached the Takht on this matter, personal assistant of Akal Takht Sahib Jathedar assured that this issue will be discussed at the next meeting of the Singh Sahibs but prior to that, a written complaint was sought from the delegation.
While the Shiromani Gurdwara Parbandhak Committee (SGPC) has shown great enthusiasm in seeking apologies from Harbhajan Singh for letting his hair down and Mandira Bedi for appearing with a Khanda tattoo in an advertisement, it has not made single public statement in regards to the case of Mohan Lal.

In response to these allegations, Mohal Lal stated that it is his personal preference in respect of how he appears in the public. While talking on a radio talk show from Vancouver, Canada, he declared that the people of Punjab adored Mohan Lal, and not his appearance, with or without his turban and hair. His comments seem to have further ignited the flames of this controversy.

A representative of Shiromani Akal Dal (A) expressed outrage at the SGPC and the Akali Dal (Badal). He said that while the Sikh organizations are trying hard to get the French Turban Ban lifted, associates of these organizations are showing no respect to core principals of the Sikh religion. He asked that Mohal Lal should make up his mind in regards to his true identity, whether he wanted to appear as a Hindu or a Sikh and to stop confusing the public.