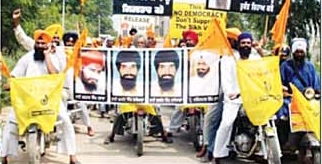 Amritsar Sahib (KP) – Following the death sentence that was ordered in the Beant Sinh assassination case, several Panthic (religious and political) parties have come forward to support Bhai Jagtar Singh Hawara and Bhai Balwant Singh. A program was recently organized by the Khalsa Action Committee at Akal Takhat Sahib to seek the well-being of the convicted Singhs and was attended by various Panthic personalities who opposed the Beant Sinh execution verdict. Additionally, Akhand Patth Sahibs and Ardas programs were organized at international levels across Gurdwaras in Punjab, Europe and the Americas.

Although Giani Joginder Singh Vedanti, Jathedar of Akal Takhat Sahib, had previously expressed his divergence with the court decision and praised Jagtar Singh Hawara and Balwant Singh’s efforts to eliminate Beant Sinh, he was not in attendance at the program. Jathedar Balwant Singh Nandgarh, Takhat Sri Damdama Sahib, however, performed the ardas at Akal Takhat Sahib to seek the ‘chardi-kala’ (high spirits) of Bhai Jagtar Singh Hawara, Bhai Balwant Singh and other Singhs who were convicted by the court.

While performing the ardas, Jathedar Nandgarh termed Bhai Jagtar Singh Hawara and Bhai Balwant Singh as heroes of the Sikh Nation who eliminated the tyrant Beant Sinh-the modern day ‘Massa-Rangar’-who was responsible for countless deaths. Ardas was also performed for the well-being of hundreds of other Sikhs who have been illegally detained by the Indian Government since the early 80’s.

Bhai Mohkam Singh, official spokesperson of the KAC, held that the death sentence that was awarded to Jagtar Singh Hawara and Balwant Singh was in gross violation of human rights and if the sentence was carried out, the Sikh Nation would become more distanced from India. Bhai Mohkam Singh also stressed that the Sikh Youth held Hawara in high regards and his execution by the State would influence them in ways the state would not appreciate. Bhai Kanwarpal Singh held that if the court’s death sentence was carried out, both Bhai Jagtar Singh Hawara and Bhai Balwant Singh would become martyrs of the Sikh Nation.

Manjit Singh Calcutta expressed similar views with Khalsa Action Committee spokespersons, but while addressing the Sangat, he lashed out at the ‘present day rulers of Punjab’ and he blamed them for not doing anything to stop the Government atrocities. He alleged that the task carried out by Bhai Jagtar Singh Hawara and Balwant Singh was in accordance with the traditions and principals of Sikh beliefs: to always stand up for justice and to stop those who commit heinous acts.

In addition, he said that Hawara and Balwant Singh were merely carrying out their duty for the Khalsa Nation. Harjinder Singh Khalsa also expressed agreement with Calcutta and held that Sikhs in the future will also not bow to any oppressors and give them the same treatment that Beant Sinh received.

Sikhs all over Punjab also expressed their disagreement with the court’s death sentence. Several places in Punjab underwent complete ‘bandh’ (shutdowns) to express their support for Jagtar Singh Hawara and Balwant Singh. The bandh was ordered by the joint leadership of the Khalsa Action Committee. Shops, taxis and other businesses owned by Sikhs were shut down for hours in order to protest the Government atrocities. All Sikhs remained peaceful during the bandh and no cases of damage to property or life came to light.