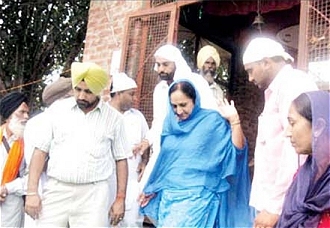 Barnala, Punjab (KP) – Bibi Surinder Badal, notoriously known for her relations with anti-Panthic cults such as the Noormehal Dera, Bhaniarewala, Dera Sacha Sauda and Naamdharis, has once again come into the limelight for violating the Rehit Maryada. This time her blasphemous act includes sacrilege of Guru Granth Sahib Ji.

Although this incident took place roughly ten days ago, and it is similar in nature to the acts of Gurmeet Ram Rahim, it has not received the due attention of any Jathedar. Giani Balwant Singh Nandgarh, whose name has been attached to this case, has also not done much besides providing a statement promising an inquiry.

The blasphemous act of Bibi Surinder Badal involved organizing an Akhand Path of Guru Granth Sahib Ji at the tomb of ‘Sant’ Chita Nand of Barnala’s Gaushala Road. The self-proclaimed Sant Chita Nand had strong relations with the Badal family five years ago before he passed away. Because Chita Nand owned a few buses, he often visited the Badals at their residence to smooth over some of the legal formalities of operating a transportation business in Punjab. During his visits, Chita Nand left such a strong influence on Bibi Badal that she started visiting his dera on a frequent basis.

Bibi Surinder Badal organized the Akhand Path Sahib to fulfill Chita Nand’s last desire—that was to have his final rites performed by the Badal family. According to close sources, Bibi Badal was accompanied by some senior Shiromani Akal Dal and Shiromani Gurdwara Parbandhak Committee members. The whole program took place secretly but police and security personnel were deployed at the site to avoid any interruption.

During the whole program, the general public and the press were not allowed anywhere near the tomb until the Akhand Path’s reading concluded and when Bibi Badal performed Chita Nand’s ‘sharaad’ (Hindu death ceremonies) and ‘havan’ (a Hindu ‘inner’ purifying ritual). Former Cabinet Minister Sikandar S. Maluka, SGPC Member Jagroop Dhillon and former member Satnaam S. Bhai Rupa also took part in all the rituals along with Bibi Badal.

Upon hearing the complaints of the Sangat, Jathedar Nandgarh assured the appropriate actions would be taken against Bibi Surinder Badal after written appeal was received from a credible Sikh organization. He further stated that the Ragi Jatha had left without taking permission and that appropriate actions would also be taken against them for violating the Sikh Rehit Maryada.