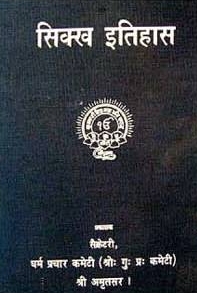 Nagpur, Maharashtra (KP) – The Dera Sacha Sauda issue has not been solved yet and another issue has already raised the fury of the Sikh masses living worldwide. The recently published controversial book ‘Sikh Itihaas’ has several peculiar facts behind it. Mainly, the SGPC not only put the book into circulation but also published it.

The book has been written in Hindi and it contains several insults to Guru Sahib and Sikh history. Although the insulting terminology is prevalent throughout the book, many are surprised to find out that the SGPC allowed the book to be put into circulation. For this reason, the SGPC President in particular has received scathing criticism from the Sikh Sangat. Some of offensive passages called Guru TegBahadur Sahib Ji, the 9th Guru of the Sikhs as a 'thief', and the 6th Guru Sahib Ji a 'kidnapper', the 10th Guru Sahib a 'coward'.

Atinderpal Singh, President SAD (International), is one of the only Sikh leaders that has raised concerns about the contents of the book. While talking to the press from Kotkapura, he lobbied that the role of anti-Sikh organizations such as the Rashtriya Sikh Sangat and Bhartiya Janta Party must be uncovered by initiating a proper inquiry into the book. In addition, the party president lashed out at Avtar Makkar, Parkash Badal, Jathedar Vedanti and several Sant Samaj leaders for allowing the book to remain in publication despite the requests of Sikhs living in various parts of Punjab.

Bhai Atinderpal Singh stated that the writer of the book had even surpassed the acts of Gurmeet Ram Rahim by using such derogatory terminology in the book.

He also expressed grief over the silence of the Sikh leadership in regards to the book and has asked Giani Joginder Singh Vedanti to understand his role as the Jathedar of Akal Takht Sahib and to summon the SGPC President along with Dharam Parchar Committee officials.

Sikh Sangat based in parts of Punjab and other States has called for a boycott of the book and has been organizing programs to burn copies of it as an expression of their protest. Furthermore, Sikhs living in all parts of the world have been asked to cut any type of donations that are being sent to the SGPC until the organization’s officials are punished for their activities.

A Khalsa Alliance (KA) representative based in California also used strong words in relation to the SGPC’s involvement in the book. It was brought to the attention of Panthic Weekly staff that the book was initially a part of Bibi Jagir Kaur’s set of proposed books that were circulated within hundreds of SGPC controlled Gurdwara Sahibs. According to the Alliance representative, while old copies of this book are still available at many Gurdwara Sahib libraries, distribution of this book was geared up once again just about a month ago.

The Shiromani Gurdwara Parbhandhak Committee has responded to the concerns of the Sikh community in regards to the book ‘Sikh Itihas’. Despite the wait, the statement by Avtar Makkar that was provided to the press has fallen short of the expectations of the Sikh Nation.

According to the statement, a new panel has already been initiated to review all the books that are proposed to the SGPC. SGPC Additional Secretary Joginder Singh has been asked to head the panel, while Prof. Balwinder Singh, Dr. Balwant Singh Dhillon, Dr. Kharak Singh, Dr. Kirpal Singh, Dr. Jasbir Singh Sambhar would sit on it to review the contents of the books.

Avtar Makkar further held that he was not involved in the publication of the book and denied that any organization has contact the SGPC. He asked Sikhs situated throughout Punjab to contact the SGPC directly to report any derogatory parts of the book.

A meeting was also held at Akal Takht Sahib about the controversy that has been stirred by the book. The panel of five Singh Sahibs has asked the SGPC to provide details about the publication of the book in full detail within seven days. Decisions on this issue have been delayed until the report is submitted to Akal Takht Sahib.

In a separate incident, the SGPC President said that circulation of the book has been stopped and that the Dharam Parchar Committee is in the process of recalling the books that have been distributed in several villages.