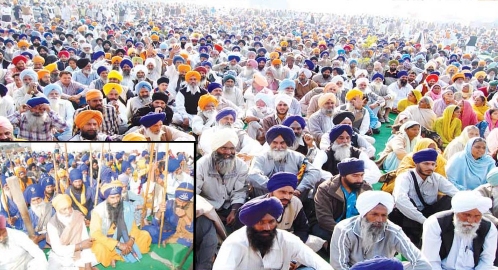 Sahibzada Ajit Singh Nagar, Punjab (KP) – The differences between S. Simranjit Singh Mann and Bhai Daljit Singh Bittu seem to be escalating with time. After announcing two separate functions just this past week, the Shiromani Akali Dal (Amritsar) party has officially split leaving one faction in the hands of Sardar Mann and the other under direct control of Bhai Bittu.

Confirmation of the split faction came when several associates of Daljit Singh Bittu and ex-party members of S. Simranjit Singh Mann demanded Mann's resignation from the party. Bittu has also called for a boycott and disbanding of the actual SAD (A) and announced a new permanent executive party.

As predicted, Daljit Singh Bittu is heading the new five member committee with the post of chairman. Interestingly, Harpal Singh Cheema, who is currently in police custody, was named as a member of the executive committee. In addition, Kamikar Singh Mukandpur, a former close associate of S. Mann, has also been included. Harinder Singh Norway, former MP and Lok Sabha Member, and Gurjatinder Pal Singh Bhikhiwind, former General Secretary of SAD (A) have also found leadership roles in the executive committee. 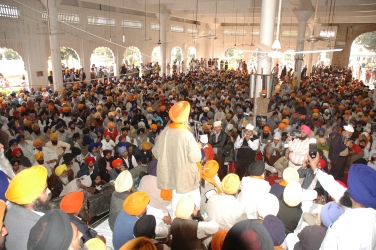 Pro-Bittu Conference held at the Gurdwara Sahib at Alamgir was clearly a much smaller rally, indicating Mann still had a bigger support base than Daljit Singh

Formation of the new front was welcomed by several Sikh leaders, including members of the Khalsa Action Committee (KAC) and Damdami Taksal (Dhumma). It should be noted that previously, a boycott of KAC was sought by S. Mann for working against mandates of Akal Takht Sahib. Bhai Bittu was also expelled for being close to KAC despite directives passed by the party.

The newly formed committee has already announced two big scale conferences – one which will take place in the last week of Dececmber at Fatehgarh Sahib and the other in the second week of January at Muktsar. While addressing the press, the committee spokespersons advised S. Mann to resign from his post or else leave it up to the court to decide who could use the party name.

Supporters of S. Mann have however declared that they will continue with their initial boycott of Bhai Bittu along with his newly formed political party. Supporters of S. Mann, especially those based in Western Countries have come out against the acts of Bittu and his associates. Officials of Shiromani Akali Dal (A) have directly named Bittu as a puppet in the hands of the Badal Government which has always been against S. Mann.

Recently, in a press release, the leadership of SAD (A) based in the United States and Canada has stated that Bittu entered the party with the mission of destroying the party structure, but after being caught committing anti-Panthic acts, he was expelled under disciplinary terms. In addition, the leadership suggested that Bittu should be made to appear at Akal Takht Sahib for violating the mandates passed from there as well.

According to the press note, Bittu had violated the directive passed by Akal Takht Sahib asking all Akali Dals to merge into one strong political party. Bittu who should have worked to merge all Panthic Akali Dals, instead constituted a new political party which is damaging to the Khalsa Panth.

Although Bhai Daljit Singh Bittu enjoyed support from several political leaders based in the United States and Canada, many have now decided to break all ties with the former federation head. In addition, the Youth Wing of Shiromani Akali Dal (A) USA has asked the Sikh Sangat to discontinue all donations and support to Bittu and his political party.

Ravinder Singh, President of the Youth Wing, along with other officials of the party told the press that Bittu is known for working against Panthic interests. These leaders have accused Bittu of always working against the benefit of the Panth. It was stated that Bittu started his anti-Panthic activities by splitting the Sikh Youth Federation into two parties and later the ‘Panthic Committee.’