Hall of Shame : The Heretics in the Panth 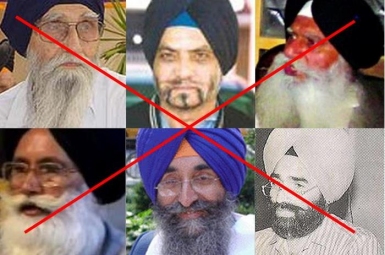 When Socrates was given a choice to either escape from the prison, or face execution by drinking the poison hemlock he preferred the latter. He believed in what he had preached. And he didn’t deter to lay his life for those principles. He didn’t want to be seen as a hypocrite among his followers. He died defending his principles.

Hypocrisy and compromising their own principles doesn’t seem to be a big problem for some Sikh preachers who, for unknown reasons, flip-flop on their own preaching and belief. Prof. Darshan Singh has become the latest person to defy his own belief on Gurbani. By doing so he has joined the ranks of Bhag Singh, Principal Harbhajan Singh, Harjinder Singh Dilgeer and Gurtej Singh who also backtracked from their earlier belief and faith on the bani of Sri Guru Gobind Singh Sahib.

It is a fact that if a person wants to become a Sikh he will have to be baptized using the banis of Sri Guru Granth Sahib and Sri Dasam Granth Sahib. And It is also a fact that if a person wants to talk about the Khalsa principles, the concept of Saint-Soldier and the life of Guru Gobind Singh Sahib he will have to quote from the Dasam Bani as well. One cannot put the Sikh history and belief into perspective without quoting from the sacred bani of Sri Guru Gobind Singh Sahib.

From the changing stance of some of the above mentioned writers and pracharaks on the Dasam Bani one thing, though a bit puzzling, is becoming quite evident. Those who had grudges on the functioning of SGPC or the role of our Jathedars on handling different panthic issues, more often justified than being imaginary, aimed their guns towards the Dasam Bani as well. Whereas Sri Guru Granth Sahib contains references to the figures from Hindu mythology, Sri Dasam Granth Sahib contains explanatory references to these figures. No wonder this scripture can be and has been misused by those Sikhs who want to blackmail fellow Sikhs, and by those Hindu hardliners who want to disprove Sikh’s separate identity.

It was the wisdom of Gurmukhs like Bhai Kahn Singh, Bhai Vir Singh, Master Tara Singh, Bhai Randhir Singh, Prof. Puran Singh, Giani Ditt Singh etc who could defend the Arya Samajist onslaughts against the bani of Guru Gobind Singh Ji with great vigor. What Kaal, Mahakaal, Kalika and other names mean in Guru Sahib’s bani has been extensively explained a century ago by these Gurmukhs(1). How the non-Sikhs particularly Hindus interpreted the meaning of these terms at that time, is now being interpreted by these rebellious Sikhs. A simple mathematical equation puts these Sikhs into the same shoes as those of the Hindu fundamentalists of that time.

Blindly ignoring the primary dates of the completion of the individual compositions mentioned in the Dasam Bani(2), and un-acknowledging the great effort of Bhai Mani Singh Ji in the compilation of Guru Sahib’s bani after his demise, recently Dr. Dilgeer was quoted saying that the Dasam Bani was compiled by the British, centuries after the death of Guru Gobind Singh Sahib. The same Dr. Dilgeer while serving as the Director of the Sikh Research Board considered Chandi Di Var (Source of Ardas) and Chaupai Sahib (Source of Amrit Sanchar and Nitnem) as the writing of The Tenth Master(3). After he was unceremoniously removed from the post he aimed his guns towards his own beliefs. Now he travels around criticizing the SGPC along with the Dasam Bani.

Gurtej Singh (ex-IAS) was conferred the title of ‘Prof. of Sikhism’ by SGPC for his panthic services during the 1980s. Until recently he understood the importance of the Dasam Bani in instilling the warrior spirit in the Khalsa. However, under some unknown pressure, he too aimed his guns towards the Dasam Bani as a result the honor with which he was once bestowed was repealed by the panth.

Another classic case of the abandoning the faith on Dasam Bani is that of Principal Harbhajan Singh (Shaheed Sikh Missionary College). He has numerous articles and books written in the glory of the bani of Sri Guru Gobind Singh Sahib. Interestingly he was the one who in his writings often addressed Sri Dasam Granth as Sri Dasam Guru Granth Sahib. Then came another book written by octogenarian Principal Harbhajan Singh which was a complete U-turn from his own earlier writings. In that book he not only rejected the Dasam Bani but also used derogatory language against it. Before he could be asked to explain his detraction from his earlier stance, he passed away.

But the latest and the most surprising member of ‘The Hall of Shame’ is Prof Darshan Singh Ragi. He had been a casualty of his own blasphemy. Darshan Singh, while in his heydays as a panthic ragi and during the peak years of Punjab’s political crisis used to perform keertan and katha from Dasam Bani instilling that warrior spirit among the youth for which the bani was written and composed. He has now started chopping his roots by questioning his own beliefs. Last year when the whole panth was celebrating the Prakash Utsav of Sri Guru Gobind Singh Ji, Darshan Singh from a historic Gurdwara associated with Guru Teg Bahadur’s martyrdom ceased the opportunity to publicly declare his abdication from the panthic values and his own faith and spewed venom against the bani of Sri Guru Gobind Singh Sahib. This is amusing because until quite recently Darshan Singh was performing keertan and katha from Dasam Bani, and was positively propagating its true meaning and advising sangat to read the banis in Sri Dasam Granth Sahib. His sudden U-turn from what he preached earlier has come as a big surprise. He was either wrong earlier or is wrong now. If he was correct earlier and is wrong now then he is a hypocrite and a charlatan. If he was wrong before, then he is untrustworthy.

Belief and faith is something intrinsic to the existence and welfare of a community. In a bound fabric of religious dogmas, individual views come secondary to the primary beliefs of the community. And every claimant of a religious community ought to honor that collective wisdom.

Sikh history is full of examples where people preferred to sacrifice their life in order to uphold the glory of their faith. Compromising the faith and turning around from ones beliefs is not only un-Sikh but is immoral and unethical too.

Those who propagate disbelief, skepticism and suspicion with the aim of creating confusions, are always pushed to the fringes. They remain disgraced and ostracized only to look back and ponder upon their wrong deeds.

(3)"CHANDI DI VAAR - Ballad of Chandi, written by Guru Gobind Singh Sahib...the theme of this ballad is war between good and evil. The Sikh warriors used to listen to this Vaar during the days of battle. Chandi Di Vaar has been written in central Punjabi language. It is replete with powerful, brilliant and articulate similes."
Harjinder Singh Dilgeer (The Sikh Reference Book, 1997)

"CHAUPAI - Literally means a verse or composition of four lines in a specific meter. It is a composition of Guru Gobind Singh Sahib. The main theme of this hymn is to invoke the Almighty to seek his Grace and Blessings for protection in every sphere of life."
Harjinder Singh Dilgeer (The Sikh Reference Book, 1997)