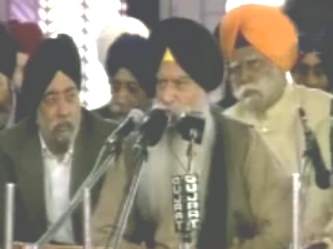 Ragi Darshan Singh with former minister Buta Singh who was ex-communicated from the Panth in the 1980's.

Toronto, Canada (KP) – In a meeting attended by representatives of various Gurdwara Sahibs and Panthic organizations of the Greater Toronto Area at Gurdwara Jot Parkash (Brampton) on January 19th, a warning was issued to Ragi Darshan Singh to refrain from indulging in anti-Gurmat activities. Ever since Operation Bluestar in 1984, Ragi Darshan Singh, the ex-Jathedar of Akal Takht Sahib, has been named in various dubious activities.

Representatives of the Damdami Taksal, Akhand Kirtani Jatha (Canada), Mata Bhag Kaur Jagriti Dal, Gurdwara Sahib committees, and other Panthic organizations who attended the meeting, in a joint press release, held that a majority of the Gurdwara Sahibs in Toronto have already put a ban on kirtan and katha by Ragi Darshan Singh. Furthermore, the actual face of Ragi Darshan Singh and his role in anti-Panthic projects since 1984 is not hidden from the Sangat of Toronto.

Not very long ago, Ragi Darshan Singh while speaking from the stage of Gurdwara Rakabganj Sahib (Delhi), used very derogatory terminology to address the 41st vaar (ਵਾਹੋ ਵਾਹੋ ਗੋਬਿੰਦ ਸਿੰਘ ਆਪੇ ਗੁਰ ਚੇਲਾ) by Bhai Gurdas Singh Ji (second). In addition, Ragi Darshan Singh also tried to cause delusions in the minds of the Sangat regarding the Bani of Dasam Granth Sahib. Video recordings of this diwan is available with the Panthic organizations.

An invitation for open debate on Dasam Granth and bani of Bhai Gurdas Singh Ji has already been issued to Ragi Darshan Singh by officals of the Akhand Kirtani Jatha and other Panthic scholars. Panthic Jathebandis have already finalized plans to hold this debate infront of the international media and video cameras at Sabo Ki Talwandi (Bathinda) and Sri Amritsar Sahib. But instead of accepting the challenge, Ragi Darshan Singh has taken the shelter of several pro-Kala Afghana individuals and organizations and has refrained from answering the queries by Panthic Jathebandis.

All of those at the meeting, held to discuss a very important Panthic issue, would like to warn and challenge Prof. Darshan Singh to refrain from indulging in anti-Gurmat activities and to sit with Sikh Scholars, face-to-face, to hold a debate so he can truly know about the level of his shallow knowledge of Gurmat.

The actual reason behind the vulnerability of Prof. Darshan Singh remains to be discovered. Why a person who at one time sang Bani of Dasam Granth Sahib for monetary gains is now speaking against the same bani is a mystery for all. Sikh Sangat should stay wary of the doubts that these so-called scholars are creating in the minds of Sikh Sangat. Sikh residing worldwide should also boycott such scholars.