Why is Darshan Singh facing the wrath of the Panth? (Editorial)

Ragi Darshan Singh, the ex-Jathedar of Sri Akal Takht Sahib, again stirred further controversy when he stated that there is absolutely no need for Sikhs to recite any banee outside of Sri Guru Granth Sahib Ji, indirectly dismissing all external Banees, including that of Guru Gobind Singh Ji. All Sikhs are required to recite the 7 daily banees, 4 of them contain verses directly from the Dasam Granth.

Ragi Darshan Singh’s dismissal of all other Banees except that which is compiled in Guru Granth Sahib Ji is a direct attack on the Sacred Sikh Nitnem and the Amrit Sanchar Ceremony--in which Dasam Patshah’s Banees Jaap Sahib, Swaiyay, and Chaupai Sahib are read. Furthermore the Sikh ardaas and Sikh Salutation (Waheguru Ji Ki Fateh) is taken directly from the contents of the Dasam Granth.

In recent weeks, the ragi has made similar remarks against the verses in Bachitter Natak and the Vaars of Bhai Gurdas Ji II. Most the attacks by Darshan Singh were made from the stages of Gurdwara managed by the Delhi Sikh Gurdwara Management Committee (DSGMC), yet the Committee has failed to put a lease on the ragi's offensive activities. The DSGMC needs to take a firm stand on this matter, as others have in Nanded and Punjab.

Leading an Effort Against Naastic-vaad

One person who has been leading the effort against the likes of Darshan Singh and other Missionary types is the editor 'Sant Sipahi' magazine, Sardar Gurcharanjit Singh Lamba. This publication is the oldest panthic magazine still in print. Panthic Weekly met up with the editor during his visit to Calfornia last week. He spoke at the largest and most popular Gurdwara Sahib in the United States, in Fremont, California. 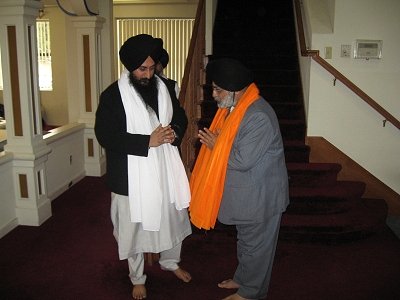 After the conclusion of the heavily attended divan, we had the opportunity to sit down and discuss with Sardar Gurcharanjit Singh the ongoing assaults on Dasam Patshah’s Banees by the Missionary-Kala-Afghana lobby. He discussed and shared with us in detail, some examples of the attacks this lobby is making on the sacred Sikh scriptures, and the manner in which Darshan Singh has also joined their ranks. They are as follows:

Details of the Charges

The charges against Prof Darshan Singh for using derogatory remarks for Guru Gobind Singh Sahib's banee and turning his back on his earlier beliefs are very serious and cannot be ignored.

For some time now Darshan Singh has been cashing every opportunity to attack the banees of Sri Guru Gobind Singh Sahib. Perhaps under some misguided belief that his blasphemy would go unchecked, he increased his assault on Gurbanee, Itihas and Gurmaryada (Scripture, history and conduct).

Now that the Panth has finally looked at this seriously, it is important that his blasphemy, hypocrisy and the charges against him be brought in front of the sangat.

It might be difficult to understand Darshan Singh's U-turn from his own earlier beliefs and sermons, but it is not difficult to understand which group's skewed ideological views he is serving. All Panthic organizations have been unanimous in condemning Darshan Singh. As expected only a handful of people and groups who are vocally supportive of the excommunicated Kala Afghana and his distorted ideology have come to his support.

If what Darshan Singh said had come from an unknown individual, then his views would have been ignored as heretical. Because Darshan Singh's novel views even contradict his own previous position, it is important to bring this to the Panth's attention.

Just to ensure that the genuine issues surrounding Prof. Darshan Singh's blasphemous comments are not watered down, here is a brief gist of things that have caused Darshan Singh to face the wrath of the Panth and Panthic institutions:

1. Darshan Singh says, "Even the Gurbanee of Guru Gobind Singh ji cannot be accepted, if it is not according to Gurmat."

Are the Guru and Gurmat two separate entities?

This was exactly the stand of excommunicated Kala Afghana: the writings of Guru Gobind Singh ji cannot be considered as Gurbanee. If Darshan Singh's views are taken to be true, then where is the concept of banees of nitnem and amrit sanchar? All through these years, was he doing the Keertan of literature and not of Gurbanee? Are Sikhs baptized with literature and not Gurbanee? Do millions of Sikhs around the world recite literature for their Nitnem?

4. Guru Gobind Singh Sahib's autobiography, The Bachittar Natak, is the only source where the primary evidence of the martyrdom of Guru Teg Bahadur Sahib is canonized by Guru Sahib's own pen. All through his life, Darshan Singh had been doing Katha and Keertan from it. And now he has the audacity to denigrate and speak volumes of filth against this indispensable source of history and Gurmat--and that too while performing Keertan at Rakab Ganj Sahib, the gurdwara associated with Guruji's martyrdom. The walls of all the gurdwaras of Delhi that are associated with Guru Tegh Bahadur Sahib resonate day and night with stanzas from Bachittar Natak during Ardas.

Once Dr. Fauja Singh acknowledged the Persian chronicles's version of Guru Tegh Bahadur Sahib's martyrdom, and he had to face the wrath of the Panth for ignoring the primary evidence given by Guru Gobind Singh Sahib. As a result he sought forgiveness for having overlooked that primary evidential source of martyrdom given in Bachittar Natak.

Now, by attacking Bachittar Natak and Dasam Banee, Prof. Ragi has tried to behead Guru Tegh Bahadur ji once again by killing the primary evidence of Guru ji's martyrdom. Ironically Darshan Singh himself has been doing the Katha and Keertan of Bachittar Natak for years.

5. Bhai Gurdas Singh II is the author of the Vaar wherein he has clearly mentioned that Khalsa was created as a third religion separate from Hindus and Muslims. 'Peeyo Pahul Khand-dhaar Hove Janam Sohela, Wah Wah Gobind Singh Aape Gur Chela', and 'Gur-sangat Keeni Khalsa' is from his pen. Now Ragi Darshan Singh has also aimed his guns at this by using derogatory language for Bhai Gurdas Singh II.

6. Kala Afghana was excommunicated from the Sikh Panth for his blasphemous writings aimed at disintegrating the very fabric of Khalsa traditions and Gurmat. Now Darshan Singh has tried to occupy his mantle by openly praising Kala Afghana in his writings.

7. Last year, at Dayal Pura Bhai Ka, Bathinda, on the celebrations of Zafarnama day, only the parkash of Guru Granth Sahib was done. Darshan Singh has repeatedly lied that there was also the parkash of Sri Dasam Granth. For this a hukamanama from Akal Takhat Sahib was issued warning sangat to beware of him and his lies.

8. As per the Panthic maryada of Sachkhand Sri Harimandir Sahib, one of the statutory conditions for the appointment of a granthi or Singh Sahib is that he should be able to do the Katha of both Sri Guru Granth Sahib and Sri Dasam Granth Sahib. Darshan Singh has the audacity to speak against the Dasam Banee and hence has debarred himself from holding the title of Singh Sahib. Even after this, if he keeps calling himself Singh Sahib then it is nothing but hypocrisy.

9. It is strange that Prof. Darshan Singh is now speaking against his own Keertan and has defied his own Katha by which he had inculcated the Sikhi spirit in the minds and hearts of the masses.

10. Before and after his tenure as Jathedar of Akal Takhat Sahib, Darshan Singh did perform Keertan from Dasam Banee at Takhat Sri Patna Sahib and Takhat Sri Hazur Sahib, but now, with tongue in cheek, he is saying that he did not know there was parkash of Sri Dasam Granth.

All through these years Darshan Singh had earned respect as a Panthic ragi by his devotion and belief in Gurbanee. He himself has destroyed that respect by denigrating the same banees.

These are serious issues requiring serious consideration. IHRO, AKJ and various Panthic organizations are fulfilling their Panthic and religious duty by bringing this out to the sangat.

Knowingly or unknowingly Darshan Singh is serving the cause of those who are aligned to the distorted and ostracized ideology of Kala Afghana, by becoming the handle of their anti-Panthic axe. This is evident from the support he is getting from these quarters. These people will come to the rescue of anyone who will accomplish their agenda of damaging the Sikh principles. The above views of Darshan Singh clearly prove that point.