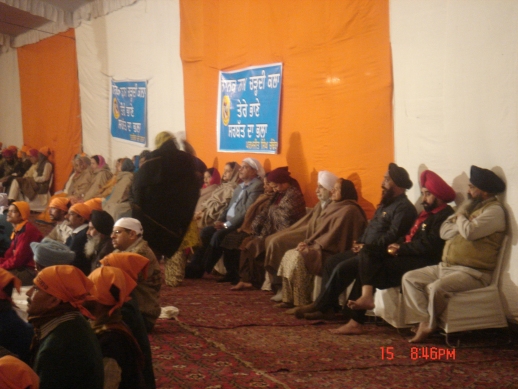 Click to view more images of beadbi at this function

New Delhi (KP) - There seems to be no end to the absurdity that is being illustrated by those that claim to carry the torch of religion and faith. No doubt the Shiromani Gurdwara Parbandhak Committee and our Jathedars are the number one offenders.

For example, in December of 2007, Panthic Weekly published the exposé “Hindu Infiltration of Sikh Institutions at the Highest Levels” in which our Takht Jathedars and Head Granthis were shown attending a pro-RSS functions where there was a blatant disregard for basic gurmat maryada, and open disrespect of Guru Granth Sahib Ji's diwan. Interestingly, around the same, another similar program was being held at Rajinder Nagar, New Delhi where participants and Sikh leaders demonstrated again their disrespect of Gurmat Maryada and Sikh principles.

As with the previous Prerna program, this one was also organized and supported by the same anti-Sikh ‘Prerna’ - RSS nexus. They include: Chaman Lal, Ashwani Kumar (Editor of anti-Panthic newspaper the Punjab Kesri), and MDH (Mahashian Di Hatti) owner Dharampal among others.

Chaman Lal’s connection with MDH and Punjab Kesri are deep and troubling. Below is copy a birthday celebration invitation for MDH owner Dharampal for March of 2005 - Chaman Lal attended this program in which the editor of Punjab Kesri, Ashwani Kumar, was especially honored. 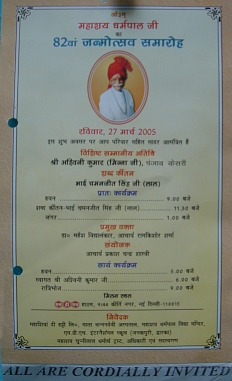 It may be noted that this is the same Punjab Kesri that has published anti-Sikh articles such as the one several years back with a picture of Sri Darbar Sahib, Amritsar along with Luv and Kush, the twin sons of the Hindu Deity Ram Chandar. The Kesri article alleged that the sacred site of Sri Darbar Sahib was the actual birthplace of Luv and Kush, and therefore contented that it was a Hindu temple. 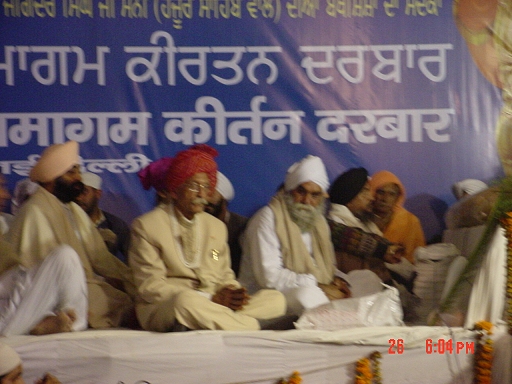 This is the same MDH owner, Dharampal who attended a ‘Kirtan’ program organized at Karol Bagh Ravidas Mandir, in which Sri Darbar Sahib Head Granthi Giani Gurbachan Singh honored Chaman Lal, and Hindu Shankryacharyas in the presences of Guru Granth Sahib Ji. The same nexsus seems to be appearing together at various anti-Sikh functions, time and time again. See: http://www.panthic.org/gallery.php?id=3776 for further pictures of the Ravidas Mandir program.

The December 15, 2007 Rajindera Park function was organized under the banner of “Mahan Kitan Darbar” by a Tarlok Chand Sharma, his wife Laxmi Sharma of the Brahman Sabha, SGPC's Paramjit Chandok. Chandok also runs the outfit called 'National Sikh Organization'. Incidently, National Sikh Organization has the same connotation as the name “Rashtryia Sikh Sangat”, which is an off-shoot of the RSS. Chandok was one of the key promoters of this program. 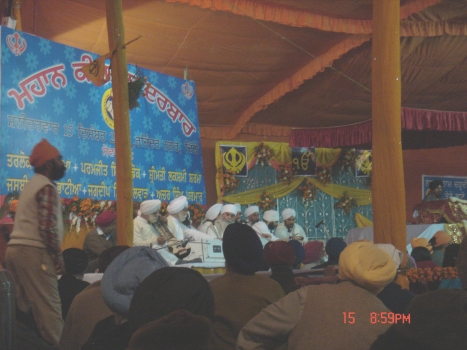 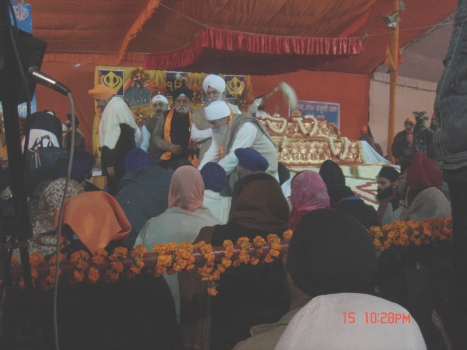 Chaman Lal and organizers being honored at Rajendra Nagar function

As in the pro-RSS Prerna programs of 2006 and 2007, the Sikh Rahit Maryada was openly flouted at the Rajendra Park function. During Prerna 2007, Giani Gurbachan Singh had requested the organizers to not use chairs in future programs, yet Rajindera Park organizers had chairs lined up across the sides of the tents where Guru Granth Sahib Ji’s Parkash and Kirtan was being recited. Across the tent, a catered ‘langar’ wass being served by bare-headed waiters, in a buffet style setup. This is another violation of Sikh Maryada. 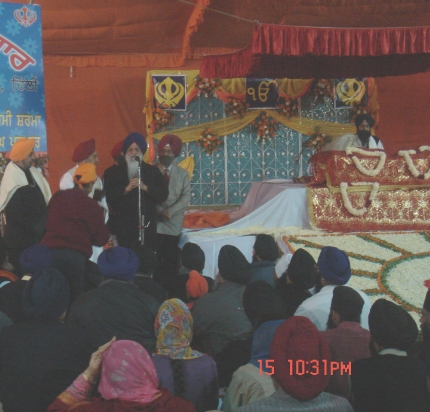 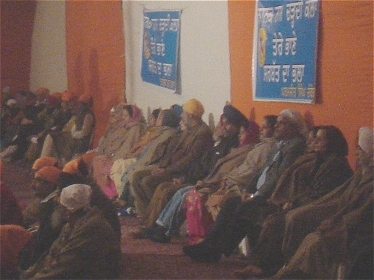 Shamelessly, Shiromani Gurdwara Parbandhak Committee (SGPC), president, Avtar Makkar and former Delhi Sikh Gurdwara Management Committee (DSGMC) president Avtar Hitt, both partook in the program, openly congratulated the and honored the organizers, yet failed to point out the violations of maryada taking place in front of them.

According to the official Sikh Rahit Maryada that is promoted by Sri Akal Takht Sahib and the SGPC, no one in the congregation, in the presence of Sri Guru Granth Sahib, can sit on “a distinctive seat, a chair, a stool, [or] a cot.” Why did this occur at Rajdenra Park ?

One wonders, what’s more disturbing? The fact that functions organized by pro-RSS outfits are becoming the catalysts that dare to openly challenge Panthic norms and practices, or the fact that representatives of Sikh institutions such as Sri Akal Takht Sahib, SGPC, DSGMC have their respresentatives participating in these functions without any regard for maryada.

Are the likes of Chaman Lal, MDH’s Dharampal, Punjab Kesri’s Ashwani Kumar, and the Brahman Sabha, the National Sikh organization, along with SGPC, DSGMC, our Jathedars and Head Granthis all in this together? Perhaps,. these programs are a litmus test by their masters to see how diluted the Spirit ofnexus Sikhi has become.