After Takht Sri Patna Sahib sevadars issued an unprecedented ‘Hukamnana’ against the controversial Ragi, Darshan Singh, it seems like sheepish individuals and organizations are now declaring the Ragi a Panthic ‘martyr’ and an innocent ‘victim’ of some hidden conspiracy between corrupt ‘Sikh High Priests’ and the RSS.

All of the sudden the bugle of “Reverence of Sri Guru Granth Sahib Ji and Sri Akal Takht Sahib” is being blown by those who have never shown concerns about the ongoing sacrilege being committed by the Ragi and his nastic sidekicks.

Perhaps, its time again to ask the classic question: Where were they (these so-called Panthic yodhays) when:

The answer is nowhere. Their concern is NOT about Reverence of Sri Guru Granth Sahib Ji or respect for the authority of Sri Akal Takht Sahib; the concerns of Ragi Darshan Singh’s supporters are completely different.

Why is the Ragi completely silent on the ongoing beadbi at Delhi Sikh Gurdwara Management Committee's printing press? Does the Ragi not have guts to criticize Sarna, for allowing such beadbi under his watch?

Very conveniently, the Parkash of Dasam Granth at Takht Patna Sahib seems to be more of a priority for the Ragi than what is happening in his own backyard. Why ? Perhaps it is because he does not to upset his Delhi masters.

It is obvious that Darshan Singh himself has violated multiple directives of Sri Akal Takht Sahib by criticizing the Bani of Guru Gobind Singh Ji, enshrined in Sri Dasam Granth Sahib. The directives of May 14th, 2000, and November, 17, 2006 clearly mandate respect for Sri Dasam Granth Sahib. The second directive from Sri Akal Takht Sahib actually makes it clear that those who criticize the contents of Sri Dasam Granth are “mischievous elements”. Moreover, another directive was issued on January 8th, 2007 cautioning the Sikh Community on Ragi Darshan Singh’s misleading parchar.

Yes, it is unprecedented for Takht Sri Patna Sahib to issue such a decree, but was it not the duty of the current Jathedar of Sri Akal Takht Sahib, Joginder Singh Vedanti, to summon the roguish Ragi for his continual violations? Perhaps if Joginder Singh Vedanti had fulfilled his duties as the Jathedar of Sri Akal Takht Sahib, this Ragi’s anti-Gurmat follies could have been curtailed much earlier.

Due to various violations, Darshan Singh has not been allowed to use most Gurdwara stages in his home town of Toronto, Canada for many years. Not welcomed in Panthic circles, his supporters had to resort to holding functions inside banquet halls and resturarants many times.

It is a well known fact that several years ago, the Ragi participated in an Akhand Patth and Kirtan Divan that was held at the Congress Party member owned 'Lal Suhag' Banquet Hall in Brampton, Canada, where liquor and meat flow frreely. Like Paramjit Sarna, the Ragi's closest supporters are mostly Congress party members. It's a shame that a person who calls himself ex-Jathedar and lectures the Panth on Dasam Granth feels more comfortable in the company naastics and patits, who do now even know the names of the Nitem Bani

Those are very people who last week honored him inside a banquet hall for his ‘Panthic’ services. Incidentally this was the same gathering that “ex-communicated” Giani Iqbal Singh from the Panth. Ridiculously, the same people who deplored the Patna Sahib decree have in past issued their own ‘matta’ from within a “restaurant”, absurdly surpassing even Giani Puran Singh’s HukamNama issued from the Guna Railroad station.

No complaints during Jathedari Days

If one listens to Ragi Darshan Singh’s current tirades against Dasam Bani, RahitNamas, and Nitname Banis, one wonders what circumstances made him qualify to become the Jathedar of Sri Akal Takht Sahib? During his Jathedari, he had frequented Takht Sri Patna Sahib, and Hazur Sahib many times. At both Takhts parkash of Sri Dasam Granth is done on smaller lower Palki in the presence of Sri Guru Granth Sahib Ji. Interestingly, being the Jathdar if Sri Akal Takht Sahib, he could have easily brought about changes to this maryada. Yet, he never once complained about this situation. Now, more than 20 years later he realizes the truth? Or is this just one big act?

The above movie, titled ‘Nimmo’ was released in 1984. While the rest of the Panth was being besieged by the Indian Armed Forces, hundreds of youths had been killed, and thousands imprisoned due to the Dharam Yudh Morcha, Darshan Singh Ragi was busy acting in a ‘Bollywood’ type movie in which he praises Dusht Daman as the previous incarnation of Guru Gobind Singh Ji.

Filmed in the scenic foothills on the way to Hemkunt Sahib, the Ragi plays the part of a Sikh parcharik who introduces the trip to Sri Hemkunt Sahib by stating:

He then narrates the story stating Guru Teg Bahdur Sahib in his previous life was also a tapasvi, and he was being disturbed by the Rakshahs (demons) that were looking for Durga Devi. Ragi Darshan Singh then states “at that time Guru Gobind Singh appeared as Dusht Daman and eliminated the Rakshahs (demons).”

The Ragi then is shown leading his yatrees to Sri Hemkunt Sahib, while continuously waving his arms and singing the last verses of Charitropakhyaan known as Chaupai Sahib and hiking to the Gurdwara Sahib and the Sarovar.

Compare the above scene to the irrational anti-Dasam Bani outbursts by Ragi from the stages of Gurdwara Rakabganj Sahib in January 2008. One wonders if he is really a Panthic parcharik, a stage actor, or a politician.

True Panthic parchariks do not star in Bollywood movies or rub shoulders with the corrupt and crooked politicians. Take a look at this Ragi’s road trip from Bollywood to taking on the Patna Sahib Takht. 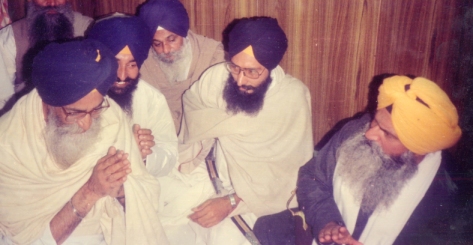 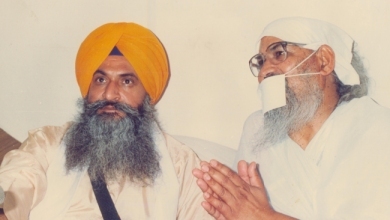 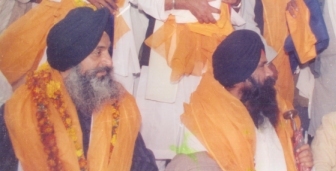 Ragi and Puran Singh : A Jathedari of convenience 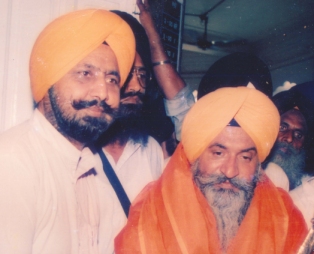 Blessings from one of his Delhi masters - Avtar Hitt Another of his Delhi masters, Buta Singh, who was ex-communicated from the Panth in the 1980s

Is Ragi nothing more than a stage actor? If paid in kind, he can sing praises of Dusht Daman, and the Jajharoos. Now that his masters have changed - so has his message and tone.

We can not blame just Giani Iqbal Singh, but the Ragi himself, for undermining, the very concept of Miri-Piri that he purported to have stood for, when he was the Jathedar of the Takht Sahib.

With what face can those who have come out in support of this mischievous Ragi call themselves supporters of Sri Akal Takht Sahib? The same people openly violate HukamNamas from Akal Takht Sahib but for publicity stunts claim to be supporters of Akal Takht Sahib. Those who undermine it have been historically cast away and discarded. This authority can not be challenged by anyone; whether it is Ambala, Bhasuaria, Kala-Afghana, or the Ragi himself. The same will happen to those who assist and sympathize with such heretics and mischiefs.

Sikh Sangat should be wary of efforts of those like Prof. Darshan Singh who claim to be sympathizers of Akal Takht Sahib but in reality they want to destroy the very basis of the Sikh faith. Their fight is not with Takat Sri Patna Sahib, for the Takht’s actions are not even the issue, the fight is really against anyone who stands for the propagation of the Khalsa Panth. Those who have shamefully aligned with the Ragi should question themselves whether by countering the ‘mandate’ of Takht Sri Patna Sahib they are working to preserve the status of Akal Takht Sahib or trying to hide the mistakes committed by the Ragi.