In the above paid advertisement, the Ragi states that the Nitnem Banis should be accepted if a 'panel' concludes they are in accordance with Guru Granth Sahib Ji's Bani.

Controversial Ragi, Darshan Singh who has recently been declared 'Pakka Tankhayia' (habitual offender) for his anti Panthic activities and for defying the Hukamnamas of Sri Akal Takht Sahib is busy touring and playing with the emotions of the sangat by instilling a fake fear of the 'Dasam Bani' among them.

When the whole Sikh nation has focused its attention on Takht Sri Hazur Sahib for the 300 year celebrations of the Gurgaddi Diwas of Sri Guru Granth Sahib, Ragi Darshan Singh is stooping low by advising Sikhs not to go to Takht Sahib and participate in those celebrations. Ragi has also used this occasion for using derogatory and offensive language for the 'Dasam Bani'.

From his latest discourses on the 'Dasam Banis' it is quite obvious that the Ragi, has a microscopic knowledge about it. At one instance he even made a mockery of himself by asserting that there are more than 15 beerhs of Sri Dasam Granth that are assigned to Bhai Mani Singh Ji. He crossed all limits of sanity when he took out a paid advertisement in a newspaper owned by an excommunucated Sikh where he proposed setting up of a panel to discuss the authenticity of 'Jaap Sahib', 'Benti Chaupai' and other Nitnem banis.

These were some reasons that Akal Takht Sahib had issued a Hukamnama on January 8, 2007 asking Sangat to beware of Ragi for his lies and deceit.

Interestingly the controversial Ragi has always used the panthic stage to fulfill his own political ambitions. His style of 'kirtan' also contradicts and defies the norm given in the Sikh Rehat Maryada. He has always distorted Gurbani to convey his political message. That is exactly what he is also doing right now. He supposedly had faith in the 'Dasam Bani' and was doing keertan from it to have a political mileage during the height of political crises in Punjab. Now that the political arena in Punjab has changed, so have Darshan Singh's political ambitions. Over the last few years he had been seen hobnobbing with the top Congress leaders and sharing political stage with them. On one occasion, giving a speech from a political stage shared by Capt. Amrinder Singh and other top Congress leaders, he even went to the extent of abdicating Congress for the 1984 anti Sikh pogroms thus backstabbing the whole panth. Apart from working towards fulfilling his political ambitions the Ragi was busy showing off his acting skills by featuring in a bollywood film in 1984, when on the other hand the whole panth was facing the brute force of the State.

While being the Jathedar of Akal Takht Sahib he himself had issued Hukamnamas from there and had declared people 'Tankhaiyas'. By defying the Hukammanas of Sri Akal Takht , he is now challenging the same authority he once headed.

Day by day Ragi is getting marginalized and has already been banned from various Gurdwaras in Toronto. However not surprisingly he has found a fan base among members of the 'Kala Afghana' cult. After the demise of Kala Afghana from the Sikh panth they have found a new Messiah in the form of the Ragi who can carry on with their anti Panthic agenda. Recently while leaving a Gurdwara in Vancouver Ragi was physically confronted by Singhs after he refused to answer their queries regarding his recent blasphemous comments on 'Dasam Bani' and his defiance towards various Hukamnamas. 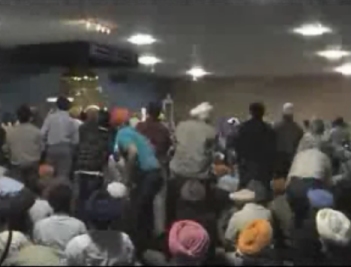 It may be recalled that once when Indira Gandhi entered a Diwan in Delhi where Sri Guru Granth Sahib was parkash a few from the sangat stood up in her honor. Sant Kartar Singh Bhindranwale who was also sitting on the stage took a strong exception to such a gesture given to Indira in the presence of Sri Guru Granth Sahib.

Ragi is however more concerned about saving his own skin and getting as many such gestures, and muster as much support as he could, given that now the Panth has seriously started taking notice of his blasphemy and Guru Nindya.