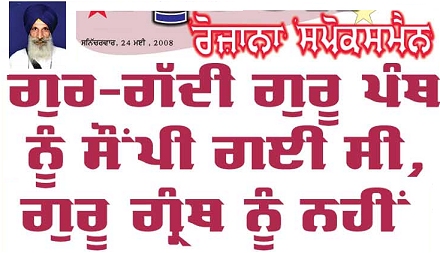 Amritsar Sahib (KP) - Following a chain of blasphemous attacks by Rozana Spokesman, another article was published by the newspaper trying to belittle the status of Guru Granth Sahib Ji. The attacks by Rozana Spokesman have continued to appear in the media during the 300th Anniversary of Guru Granth Sahib Ji's Gurgaddi that is being celebrated all around the world.

This time, an article by Darbara Seona enraged Sikh protestors all over the state of Punjab. In his article, published in the May 24th edition of Rozana Spokesman, Seona starts yet another controversy to distract the Panth's attention from the 300th Gurgaddi Divas. He claims that Guru Gobind Singh Ji never bestowed Gurgaddi to Guru Granth Sahib Ji, instead, by bowing in front of the Punj Pyare, the Gurgaddi was conferred to the Khalsa Panth.

In his article, Seona refers to the tradition of giving satkar to Guru Granth Sahib Ji's saroops by presenting rumallay as a Brahmanical ritual, implying that Guru Granth Sahib Ji's saroop is a mere book and should not be treated as 'Pargat-Guraa-Ki-Deh'. The same ideology was forwarded by Kala Afghana, who was later excommunicated for belittling Sikh traditions and Gurmat values.

In response to this blasphemous act by Seona, Sikh activists lashed out at him after learning of his visit to Sri Harmandir Sahib. Infuriated at Rozana Spokesman's continued attempts to defy Gurmat principals, local Sikh activists approached Seona at Bhai Jeevan Singh Sarai and asked the author of the article to clarify his stance and to tender apologies for hurting the sentiments of the Sikh Sangat. Seona abruptly declined to tender an apology and maintained his view on the issue that Guru Granth Sahib Ji was never given Gurgaddi by Guru Gobind Singh Ji.

Finally, after being irritated by Seona's remarks, local Sikh activists lashed out at the controversial reporter and injured him. But he was released soon after his wife and two daughters intervened. Police was informed of the incident and reached the spot after a short wait. After investigating the issue, the Police helped transport the family to the local hospital.