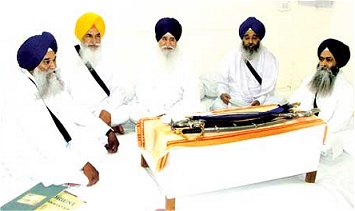 Amritsar Sahib (KP) – A special meeting of the Singh Sahibans took place as scheduled on June 6th at Sri Akal Takht Sahib. The conclave was called by Giani Joginder Singh Vedanti and SGPC President Avtar Makkar, and had several crucial pending topics on its agenda. A meeting between the Sikh Jathedars had been long overdue after Jathedar Vedanti returned from his lengthy overseas parchar tour.

According to the press release by the Akal Takht Sahib secretariat, several important gumattas were reportedly passed in the meeting.

Most notably, Sri Akal Takht Sahib re-iterated its stand on the validity of Sri Dasam Granth and warned the scripture’s detractors to cease and desist from their mischievous parchar.

Some of the Gurmattas include:

· Pronouncement of the Supremacy of Sri Akal Takht Sahib over the other four Takhts.

· Sri Dasam Granth being an inseparable Scripture of the Sikh Panth

· Sikh Sangat asked not to criticize Sri Dasam Granth and its contents.

Giani Iqbal Singh, Jathedar Takhat Sri Patna Sahib, surprisingly, was not allowed to attend the scheduled meeting by the Akal Takht Sahib Management and SGPC task force, meanwhile ex-Jathedar Kewal Singh of Takht Sri Damdama Sahib was allowed in and out of the complex without restrictions. 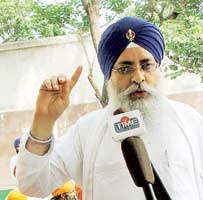 There were several tense moments with heated verbal exchanges between Giani Iqbal Singh and the task force employee who ridiculed Giani Iqbal Singh over the charges of bigamy that are shadowing him. Giani Iqbal Singh reportedly left in disgust after realizing his presence would not be entertained by Vedanti and other attendees.

Last week, while announcing the meeting jointly with SGPC President Avtar Makkar, Giani Joginder Singh Vedanti told members of the press that amongst several important issues, the ‘issue’ of Sri Dasam Granth was to be the key aspect of the meeting. In addition, while invalidating Giani Iqbal Singh’s right to excommunicate other Sikhs, Jathedar Vedanti upheld that the controversies related to of Prof. Darshan Singh were also to be discussed at the meeting.

Jathedar Vedanti termed the revised controversy on Dasam Granth Sahib as very unfortunate. He had previously asked all Panthic groups to remain away from indulging in any controversial issues during the 300th anniversary of Guru Granth Sahib Ji’s Guruship, but this mandate passed by Akal Takhat Sahib was completely rejected by mischievous persons to divert the Khalsa Panth's attention.

During another meeting at Fatehgarh Sahib, Makkar announced that a committee of Sikh Scholars has been established which will further work to raise awareness of Guru Gobind Singh Ji’s Granth within Sikh circles—especially amongst those that deny it’s authenticity. When asked about Jathedar Vedanti’s stand on Khalistan, Avtar Makkar said that this issue was not discussed in the meeting. According to Makkar, the meeting was called at Fatehgarh Sahib to discuss the issue of Prof. Davinderpal Singh Bhullar and Bibi Parveen Kaur who have been wrongfully arrested by the police.