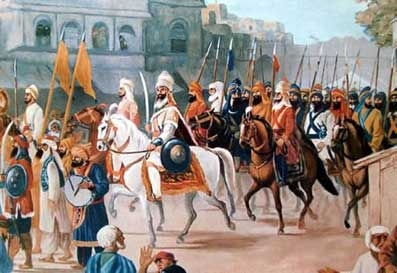 Hari Singh Nalwa (1791-1837), celebrated general of Maharaja Ranjit Singh, was horn in April 1791, at Gujranwala, now in Pakistan, to Gurdial Singh, of the Sukkarchakkia misl. The family originally came from Majitha, near Amritsar

His grandfather, Hardas Singh, had been killed fighting against Ahmad Shah Durrani in 1762. His father, Gurdial Singh, had taken part in many of the campaigns of the Sukkarchakkias Charhat Singh and Mahari Singh. Hari Singh was hardly 7 years of age when his father died. His mother, Dharam Kaur, had to move to her parental home to live under the care of her brothers. There Hari Singh learnt Punjabi and Persian and trained in the manly arts of riding, musketry and swordsmanship. Dharam Kaur returned to Gujranwala when her son was about 13 years old.

In 1805, Hari Singh participated in a recruitment test for service in the Sikh army and so impressed Maharaja Ranjit Singh with his skill at various drills that he was given appointment as a personal attendant. Not long after, he received the commission with a command of 800 horse and foot. This rapid promotion was owed to an incident in which he had cloven with sword the head of a tiger which had seized him. From that day he came to be known as Baghmar, the tigerkiller, and earned the title of Nalva.

Hari Singh was commander of a regiment at the time of the Maharaja`s Final attack on Kasur in 1807 and gave evidence of his prowess on the field of battle. He was rewarded with a handsome jagir. In the years 180910 he participated in the Sialkot, Sahival and Khushab expeditions and in four (1810, 1816, 1817 and 1818) of Ranjit Singh`s seven campaigns against Multan. He fought in the battle of Attock in 1813 as secondincommand to Diwan Mohkam Chand, and in Kashmir in 1814 and 1819. Kashmir was occupied and, in 1820, Hari Singh was appointed its governor in succession to Diwan Moti Ram. He restored order in the turbulent areas, and reorganized civil administration. The territory was divided into parganahs, each under a collector, and ihdnds, each under a thdneddr. The habitual criminals were bound down and robbers infesting the forests were suppressed.

Construction of forts at Uri and Muzaffarabad and gurudwaras at Matan and Baramula was undertaken and work was started on laying out a spacious garden on the bank of the River Jchlum. To alleviate the misery of the people in the wake of the unprecedented floods of 1821, he took measures to provide prompt relief. From Maharaja Ranjit Singh, Hari Singh received a special favour when he was allowed to strike a coin in his own name. This coin, known as the Hari Singhi rupee, remained in circulation in the valley till the closing years of the nineteenth century.

In 1822, he was assigned to the Pathan territory of Hazara on the northwest of the Sikh kingdom, where he remained for fifteen years and settled the disturbed area. He built a strong fort near Salik Serai, on the left bank of the Dor river, and on the road from Hasan Abdal to Abbotabad and named it Harikishangarh, in honour of the Eighth GURU. He also raised a town in the vicinity of the fort, Haripur, which later grew into a busy commercial and trade centre.

From 1827 to 1831, he was engaged in repelling Sayyid Ahmad Barelavi`s fierce campaign against the SIKHS. In 1834, Hari Singh finally took Peshawar and annexed it to the Sikh dominions. Two years later, he built a fort atJamrud at the mouth of the Khaibar Pass and scaled it once for all for invaders from the northwest. On 30 April 1837, as he was locked in a grave battle against the Afghans under Akbar Khan, Hari Singh received four gun wounds, and two sabre cuts across his breast. He continued to issue orders as before, until he received a gunshot wound in the side.

He mustered his failing strength for the last time and managed to ride up to his field tent, from where he was taken to the fort. Here the same evening the great general passed away. His last instructions were that his death should not be made public until the arrival of the Maharaja`s relief column.