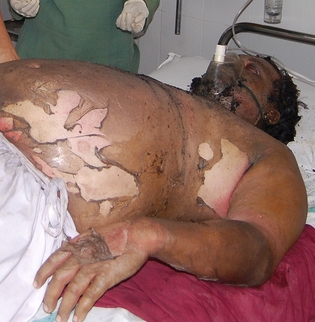 Amritsar Sahib (KP) – Ajit Phoola, the notorious pseudo-Nihang, who is responsible for a number of murders, rapes, and other atrocious crimes, was burnt alive by two prisoners inside the Amritsar Central Jail. He was pronounced dead Friday morning at the Postgraduate Institute of Medical Education & Research, Chandigarh, after being admitted in critical condition on Thursday.

The notorious Ajit Poohla, a much despised figure in the Sikh community, was a well known police cat (undercover informant) who was in custody awaiting trial for a long list of charges, such as land grabbing, drug trafficking, and the heinous crimes of kidnapping, rape, and murder of Sikh Nationalist families.

While the press always identified him as the head of the Tarna Dal Nihang Organization, both Tarna Dal and Buddha Dal have denied such claims and alleged that Poohla was a high level police informant in Nihang uniform who had been tarnishing the Sikh image.

When the Sikh nationalist & freedom movement was at its peak in the 1980s and 1990s, Poohla enjoyed state sponsored high security with over 40+ official gunmen armed with state of the art weapons. He was often seen rubbing shoulders with political leaders, including chief ministers, and senior IAS and IPS officers. His notoriety grew mainly during the Beant Sinh and Akali Badal administrations.

The incident began when two other prisoners confronted Poohla on Thursday while he was enjoying his mid-day meal. The prisoners, armed with a container of diesel, approached Poohla around 11:30am, initiated an argument in which they suddenly splashed the fuel on Poohla’s upper body and lit him on fire with matchsticks.

Noticing the common, the prison staff attempted to put out the fire that was quicly burning Poohla's upper torso, but by the time the fire was extinguished, over seventy percent of his body had been severely burnt, including much of his scalp and facial hair.

It is being reported that when these individuals, from Sikh families, learnt of Poohla’s atrocities, they were profusely upset, and immediately began to chalk out a plan to attack the culprit.

The morning before the attack, the duo obtained the diesel fuel from a nearby generator that was connected to the prison Gurdwara. A little before noon, the pair decided to approach Poohla in ward no. 9 and initiated a quarrel, resulting in Phoola being set on fire.

Poohla was immediately taken to the local Civil Hospital but then later transferred over to PGI Chandigarh, due to the seriousness of his burns. He was declared dead the next day.

The duo that accomplished the attack have been identified as Navtej Singh of Batala and Harchand Singh of Marri-Kamboki, Amritsar.

Overall there is a sense of relief amongst the Sikh community that a murderous thug who had terrorized others has now been repaid in kind--justice has been served.

Several Sikh organizations have openly declared that they would financially assist the legal cases for the two individuals who had brought Poohla to justice.

The infamous neo-Nihang, son of a Naamdhari Kooka, was initially known as Jaswinder Singh ‘good-fighter’. He became involved in criminal activities at a young age, participating in petty crimes in nearby villages. Impressed with his corrupt tactics, Jaswinder was later recruited by the local Senior Superintendent of Police, and later became known as Poohla.

The self proclaimed Nihang leader, who lived the life of a tyrannical thug, is finally dead. For the families of his victims, the news might be of some relief, but for others it is too little too late.

It was Poohla who was responsible for sadisticly eliminating almost the entire family of Bhai Balwinder Singh Jatana, a Sikh Nationalist working under the Babbar Khalsa International.

The Sikh community has not forgotten that on the night of August 30th, 1991, Poohla, with the assistance of the Punjab Police, mercilessly killed Bhai Jatana’s 80 year old grandmother Dwarkee Kaur, Aunt Jasmair Kaur, 13 year old cousin Manpreet Kaur and his 5 year old nephew Simranjeet Singh. Bhai Jatana’s father identified the killers as individuals dressed as Nihangs. Ironically, Bhai Jatana’s family was also said to have been burnt by Poohla. The family of Bhai Joga Singh Khanpur and many others were also killed in a similar manner.

For the past two decades, Poohla was also involved in drug trafficking and illegal occupation of public and private lands. He had illegally seized several Gurdwaras in Punjab and used them as centers of criminal activity. In 2005, he was thrown out of many of them due to the efforts of Col. HS Sandhu, of the Majha Human Rights Front.

When the freedom movement was at its peak in the state, Poohla enjoyed a high security cover of 42 official gunmen armed with 77 sophisticated weapons. He was known to flaunt snapshots of him in the company of senior political party leaders, including a former chief minister, and senior IAS and IPS officers.

Images of Horror : Frankenstein of the Punjab Police (PW 8/2008)