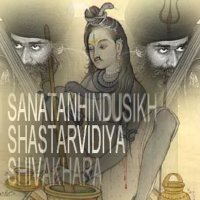 In recent months sources have revealed an alarmingly growing trend of the re-emergence of the propagation of Sanaatanism by fake neo-Nihangs on the Internet and certain individuals spreading Sanaatanism through out UK, Europe and now Canada and America.

Recently, Kamalroop Singh, a follower of UK based “Nihang” Niddar Singh, who is apparently studying a PhD in the Dasam Granth at a UK university, has been accused of mischievously propagating Sanaatanism through the false pretences of promoting understanding on the Dasam Granth. One concerned individual said, “Such people have shamefully destroyed the proud history of Panthic seva by Nihangs… that is good Nihangs who followed mainstream Sikhism thinking of no meat, bhang, alcohol, idol worship, etc.” 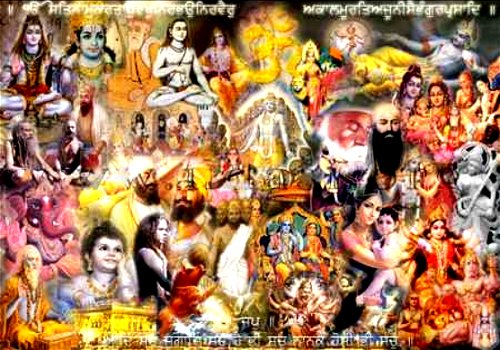 Image from a Sanaatan Sikhi website which shows Sikhs are Hindus

There are many good Nihang Dals (groups). Missel Shaheedan Harian Vela is the one that comes to mind first. They do not consume meat, bhang, or alcohol, and their Jathedar, Baba Nihal Singh, suffered through torture after 1984. He was tied up behind a jeep and dragged, causing him much injury. This is at a time when many other so-called Nihangs were towing the government's line. The problem is not with the true Nihangs, but with people posing as Nihang Singhs while promoting ‘Sanaatanism.’

So what is Sanaatanism? The word ‘Sanaatan’ literally means ‘traditional’ or ‘original,’ however in India it is used to refer to the ancient traditional beliefs and practices of the Hindus. Sanaatanism basically is an ideology that states, it is the oldest theory, hence insinuating it is correct and everything else is wrong. It does not believe in one maryada but in many maryadas and many groups, i.e. Nihangs, Nirmallas, Udaasis and Seva Panthis.

The opposite of Sanaatanism is the Khalsa ideologue. The Khalsa ideologue believes in Oneness. The Khalsa believes in One Akal, One Guru (Shabad Guru), One Guru Khalsa Panth, and One Rehit Maryada. So this is where Sikhs and Sanaatanists differ. Sanaatanism, believes in four groups, where rehit is non-existent or not important, believes that Sikhi is not a separate religion, but a part of Hinduism, Amrit is not important (and many do not take it), encourages in idol worship, animal sacrifices (called ‘jhatka’), belief in Hindu deities as gods and goddesses etc. Where as the Khalsa of the Guru believe that Guru Gobind Singh Ji created only one Guru Khalsa Panth where everyone is equal and everyone follows the same maryada, as stated by Guru Ji himself. In addition, this Khalsa of the Guru does not accept intoxicants, animal slaughter, or idol worship, and believes Amrit is fundamental to becoming a Sikh of the Guru. 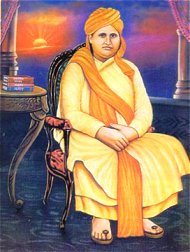 Historically this debate has been going on for some time. It came to the forefront at the time of the Arya Samaaj, a right-wing Hindu reform movement founded in 1875 by Swami Dayanand. Swami Dayanand, the key propagator of Sanaatanism was very successful in bringing many aspects of it into mainstream Sikh thinking—ideas such as caste and idol worship—which at that time was even happening in the Harmandar Sahib complex. The reaction came in the form of the Singh Sabha Movement and Gurdwara Sudhaar Lehar in which Bhai Sahib Randhir Singh, Sant Attar Singh Mastuana, and Baba Gurbachan Singh Bindranwale were prominent. These two movements reasserted Khalsa ideologue back into the Panth and reintroduced the sense of Panthic spirit and Oneness. Despite their differences in maryada, their thinking in terms of Panthic and Khalsa Ideologue were the same.

"Sanaatanist thinking is diluting traditional Sikh ideologue, and attempting to re-package itself by portraying itself as purataan (original), therefore creating doubt on fundamental issues. "

The pivotal time was Bhai Kahn Singh Nabha’s book, Hum Hindu Nahee’n, which basically finished all debate by Sanaatanists. Today, due to so many Sikh youth becoming martyred and through corrupt leadership, Sanaatanism is reasserting itself in the Panth. Through the RSS and also through illiterate Sikh thinking, Sanaatanism is going from strength to strength.

The Sikh intelligentsia, who traditionally countered this pro-Hindu propoganda, is now very old and weak. Prof Harbhajan Singh, Piara Singh Padam and Bhai Joginder Singh Talwara have all passed away in recent years. The prominent jathas, i.e. AKJ and Taksal, are consumed by internal divisions and are weakened. While other so-called RSS opponents have gotten themselves mixed up with the heretic Kala Afghana lobby, whose mis-parchar is actually benefitting the RSS, instead of countering it.

Sanaatanist thinking is diluting traditional Sikh ideologue, and attempting to re-package itself by portraying itself as purataan (original), therefore creating doubt on fundamental issues. Because Sikhs have been weakened by a lack of access to their own literature and a lack of solidarity to Panthic Sikh Rehit Maryada, the Sanaatanists have been able to flourish.

"...they are using these great examples of Sikh Spirit to promote meat, bhang (cannabis), alcohol, idol worship, and non-acceptance of the Khalsa Panth but acceptance of Indian Nationhood."

Sanaatanist Nihangs are even more dangerous. They follow the same line of thought as Swami Dayanand. What they have done is overtake the proud history of the Nihang Dals that is widely respected in Sikh History, and use it to push their non-Sikhi Sanaatan thinking. Similar to the way the BNP (British National Party) in the UK have hijacked the flag of United Kingdom. Many youth, especially youth involved in Gatka, love hearing stories from British history. But they are using these great examples of Sikh Spirit to promote meat, bhang (cannabis), alcohol, idol worship, and non-acceptance of the Khalsa Panth but acceptance of Indian Nationhood.

It is beyond belief how these modern 'Nihangs' have forgotten their pasts and are so caught up in this. This is shown by their complete lack of seva for over 50 years. Now they seem hell bent on slating the Singh Sabha movement and subtly promoting their Hindufied version to the naïve and impressionable Sikh youth who lack direct Gurbani and history knowledge.

The reality is that before we can even dream of counteracting Sanaatan thought in India, we should be realistic enough to stop it in Western countries like the UK, where certain Sikh camps and universities have become a breeding ground for naïve and impressionable youngsters to become indoctrinated with Sanaatan beliefs and made to despise mainstream Sikhi.

On careful analysis of these peoples’ talks, one can clearly see that Sanaatan beliefs are being propagated under the cloak of teaching respect and understanding of traditional Sikhi. In recent years individuals linked to the snaatanists, namely Niddar Singh (UK), Paramjit Singh (UK), and Amandeep Singh Madra, have published books on Sikh history. But more worryingly these individuals have been linked to TV documentaries on Sikhi and now under the guise of a Sikh organization that claims to be keeping a watchful eye on Sikh heritage in Punjab they are attempting to gain credibility and trust within the wider Sikh community.

The Sikh youth need to ask themselves: by associating or just accepting Sanaatanists, what are they exactly accepting? Do not just blindly play into the whole Purataan (ancient) history routine. Do you honestly think Siri Guru Gobind Singh Ji said, bhang (cannabis), meat, and idol worship is fine? Is that the Khalsa he created?

Sources reveal that Sikh youth are being groomed into Sanaatanism through the Internet, university Sikh Societies, and Sikh Student Camp (Chigwell, UK). Youngsters are being brainwashed into thinking Sikhi is pluralistic and that there are many different versions, which include a strict version, a relaxed version, a saint version and a soldier version. But the reality is that Sikhi belongs to the Guru and no individual or group. Sikhi is a holistic dharm or way of life. The Guru decides what is Sikhi. Not us.

In five years time these misled youth will openly justify partying, clubbing, drinking, eating meat, extra-marital relationships and drug use by saying that they follow a particular line of Sikhi, like their role models. But will they ever be accepted by the Guru? We all need to think logically, do we really accept Sanaatanism? Thinking logically leaving aside the attachment to proud Nihang history and reflecting on basic facts of the ideologue, we must decide - do we really accept all this white wash of the Sikh faith and history?